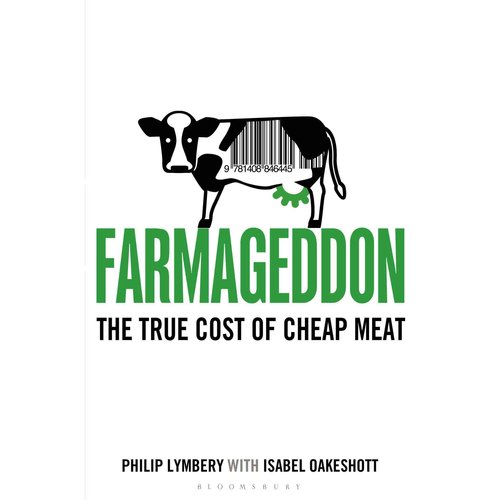 As 30,000 people came  out last weekend to make clear, many of us are hungry for better agriculture, and fed up with corporate pressure shaping the food system behind closed doors in ways that seriously harm our health and environment. We are fed up the lack of transparency and democracy associated with many issues that relate to our food, such as the secretive negotiations on a translatrantic trade agreement (TTIP) that threatens to lower food regulations and standards in Europe.

The new book Farmageddon: The True Cost of Cheap Meat (to be released January 30th, 2014) takes an investigative journey behind the closed doors of an industry that should be better understood by its consumers, from the UK, Europe and the USA, to China, Argentina, Peru and Mexico. It is both a wake-up call to change our current food production and eating practices and an attempt to find a way to a better farming future.

Timely and at times difficult to swallow, this important book is authored by Philip Lymbery, CEO of the international farm animal welfare organization and ARC2020 member Compassion in World Farming and prominent commentator on the effects of industrial farming.

For an ARC2020.eu report on Compassion in World Farming‘s investigation into 45 intensive pig farms around Europe, see here.

For ARC2020.eu report into the Pig Industry in Germany, see here.

For Arc2020.eu’s recent feature on over consumption of meat see here.

What’s involved in the ‘Healthier Animals and Plants for a Safer Food Chain Package’? […]

Slip Sliding Away: Where is all the Soil Going?

In this UN International Year of the Soil, let’s take a longer look at some of the myriad issues around soil […]

Drought, insect infestations, biofuels and monocultures are impacting Czech agriculture and the ability of the soil to do its jobs, from water storage to erosion prevention. In part one of this series we exposed this troubled ecology of soil, forests and water. Next, we look at how history, politics and policy have shaped the lie of the land. With Louise Kelleher in Prague. […]