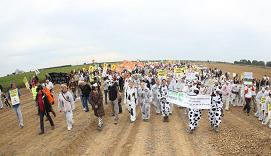 On Saturday, September 28, 1000 ‘angry cows’ – citizens, elected officials, farmers, unions – stormed the site of a factory farm development in France to demand an end to the project.  The action was part of an ongoing campaign organised by Confédération Paysanne.  The site in question aims to hold 1000 cows, much larger than France’s average farm size of 44 cows.  Its main goal would not be to produce food, but to use the methane from the cow dung to produce energy.  This project would be a dangerous symbol of the  industrialization of agriculture, with serious consequences on employment and the environment.  Read more here (in French).

A colourful noisy crew show they are fed up with mega stalls in Hassleben. […]

Beets, Beats and Better Bites with tasty treats, DJ tracks and dozens of tractors rumbling through the streets! What it’s the annual Wir Haben Es Satt (#WHES19) mobilization in Berlin. What’s happening – and why? […]