Increases in the frequency and severity of extreme weather events, including flooding, are unfolding in real time as climate change intensifies. Here, soil expert Dr. Andrea Beste delves deep into soil, and, in particular soil compaction and its role in flooding. While CAP and EU Directives have done little to help improve our soils and reduce flooding, there are, in organic farming, replicable techniques to help get the best from our soils.

The intensity of heavy rainfall events in summer and winter has increased significantly in northern and north-eastern Europe since the 1960s. Heavy rainfall is likely to become more frequent in most parts of Europe as a result of climate change. A German study on extreme weather conditions relevant to agriculture, has postulated an increase in the risk of flooding and erosion already in 2015. It estimated the costs of damage caused by flooding at 200 to 1000 euros per hectare (on-site effects) for arable crops in the EU [1]. In 2011 the total annual damage caused by floods in the 27 EU states was calculated at € 6.4 billion. Every year, about 250 000 people are affected by flood events. About 970 million tonnes of fertile soil are also lost every year in the EU due to water erosion. 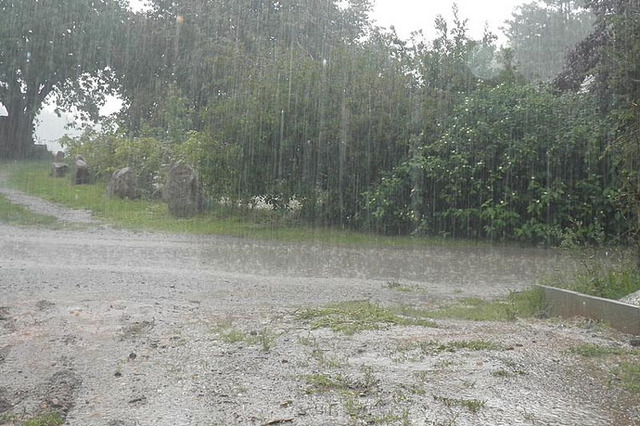 A lot of money is invested in building dams and retention polders to protect against flooding or in technically complex flow regulation, for example in vineyards. Such measures divert the water, but do not combat the causes of flooding. Nor are they a means of combating erosion. And by simply diverting the urgently needed water, the crops later lack it.

Slope gradient and rainfall intensity are major factors for erosion and flooding. Increasing sealing also plays a major role. But one factor has been virtually ignored so far: Soil compaction. Soils are suffering from increasing compaction in many intensively farmed regions in Europe. Luca Montanarella, the EU Commission’s top soil conservationist, so to speak, summarised the results of the European soil monitoring system LUCAS 2018 as follows:

“Soils under agricultural use increasingly show the symptoms of humus loss, erosion and soil compaction” [2].

The soils no longer hold water in the area – the “rain retention capacity” decreases. Three important soil functions are disturbed at the same time: the capacity to absorb rain (infiltration -> erosion and flood protection), the storage capacity (-> adaptation to climate change, securing harvests) and groundwater purification and recharge capacity (-> delivery of ground and drinking water). This can be seen especially in spring on flat land: On more and more arable land, the water stands longer and longer. On the other hand, periods of drought cause massive crop damage because the water was on the soils but could no longer be infiltrated and stored by them. 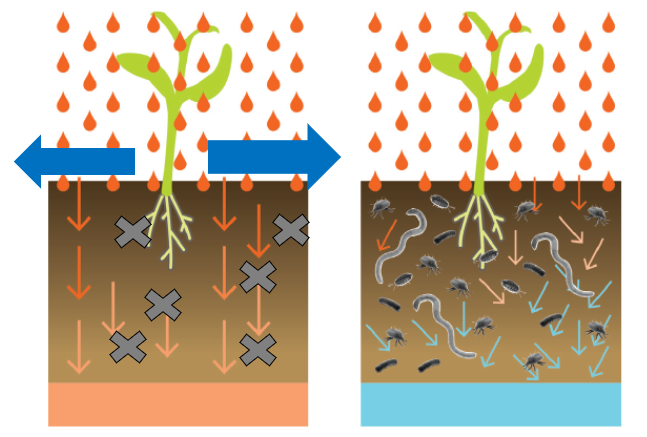 The EU research project SOILSERVICE, which involved eleven European university and research institutes, clearly stated in its 2012 report that intensive agriculture leads to a loss of soil biodiversity. Tight crop rotations, intensive fertilisation and high pesticide use, as well as the absence of organic matter, lead to a deterioration of soil biodiversity and humus loss. And this is exactly what causes compaction in the long term. The SOILSERVICE project also showed that most soil ecosystem services (clean drinking water, erosion prevention, flood protection) correlate positively with soil carbon content.

Unfortunately, little measured data has been added in recent years. A lot of modelling is done, but hardly any soil management factors are included in the models. They are diverse and effects often differ depending on the location. Soil compaction caused by incorrect soil management is difficult to model. But it exists and progresses. My investigations since 2002 on more than 400 plots in Europe (most of them in northern Germany) show micro-compaction of the soil structure due to one-sided fertilisation and too tight crop rotations. 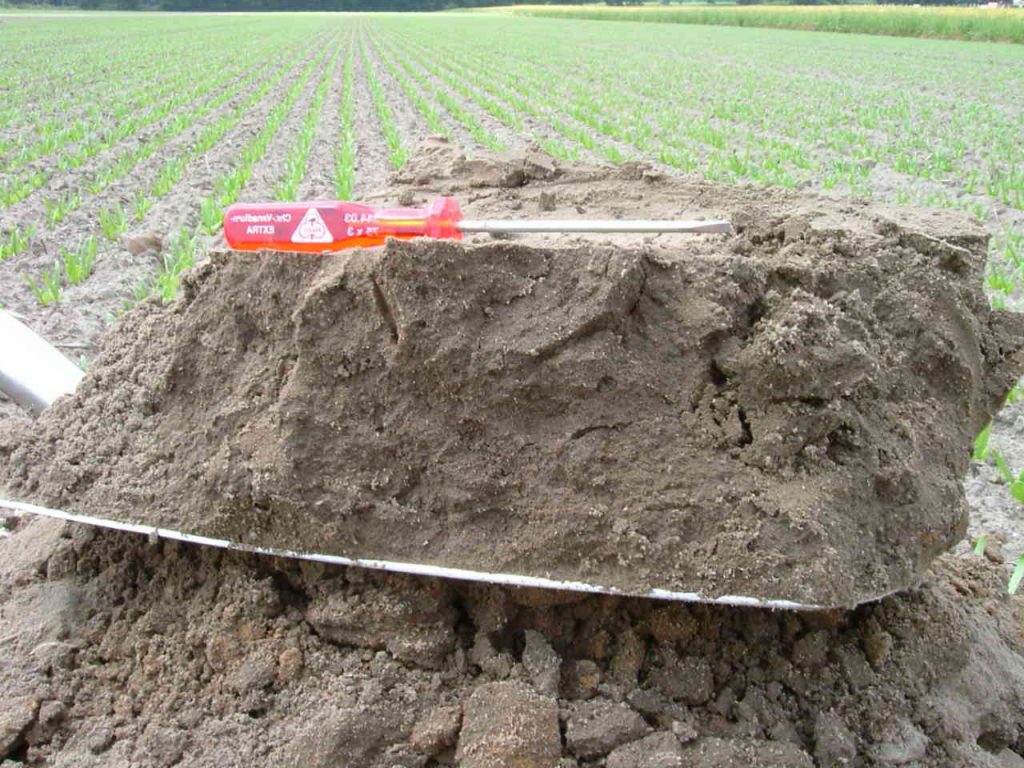 One gram of sound soil can contain up to 600 million bacteria of various species, as well as fungi, algae, protozoa, nematodes, earthworms, mites, isopods, springtails, insect larvae etc.. Extrapolated to one hectare, this amounts to about 15 tonnes of live weight, which is comparable to the weight of 20 cows.

In a complex food web, microorganisms and soil animals decompose organic material and form new substances, which in turn are nutrients for other soil organisms and plants or, as humic substances, have a favourable influence on soil structure and material exchange. Soil organisms loosen the soil or stick together soil particles. They contribute decisively to the formation of structure, promote aeration and increase the infiltration and storage capacity for water.

However, intensive mineral fertilisation does not provide enough food for the microorganisms. And what’s even worse, mycorrhiza and other microorganisms are damaged by mineral fertilisers and pesticides. If biodiversity in the soil declines as a result, all these mechanisms for structure build up also fall away. The soil becomes a mere anchorage for one-sidedly nourished high-performance plants. The yield is still acceptable, but the soil functions (natural fertility; buffering capacity; water infiltration, storage and filtration capacity) associated with a good soil structure are clearly disturbed.

Politics is turning a blind eye on soil management

As part of the implementation of the EU Flood Risk Management Directive, flood risk management plans had to be established by December 2015. Apart from other flood protection measures, the directive did propose that farms in flood-prone areas should fulfil management requirements in the future. However, instead of more strictly requiring the maintenance of a good soil structure in arable farming, this has so far mainly involved the conversion of arable land into grassland.

However, the “conditionality” regulation of the “Strategic Plans” EU’s Common Agricultural Policy stipulates that the receipt of direct payments is linked to the “maintenance of a Good Agricultural and Ecological Condition of the farmland” (GAEC). Not only is the maintenance of such a condition hardly controlled in member states, but the conditions are also extremely vague with regard to soil protection aspects. Not even a humus-balancing crop rotation is mandatory. However, monocultures are not only more susceptible to pests, they also sooner or later lead to humus loss due to lack of root diversity and high nutrient requirements. The diverse agronomic possibilities of building soil structure have not yet been discussed as a solution in all relevant strategies for flood prevention.

Humus build-up – both in arable farming and under grassland – in order to avoid flooding, would be a very important measure to be compensated for. Even small amounts are effective here. However, instead of promoting this very clear connection, large parts of politics prefer to rely on so-called “carbon farming” to get C out of the atmosphere, which does not succeed in relevant quantities and permanently anyway.

Soils can be water reservoirs …

If the soil is in good condition, i.e. not sealed, crusted or compacted, then most of the rain that falls on it seeps in. Under natural conditions, part of the water is stored for a longer period of time and is available to plants and soil animals, the rest seeps downwards purified and contributes to groundwater formation. But this is deeply dependent on biological structure building and biological water purification processes. Promoting high biological activity in the soil is THE fundamental principle of organic farming and it is regularly confirmed that organic is particularly effective here. This system thus supports a good soil structure that is less susceptible to erosion and can store significantly more water. Soil erosion is also significantly reduced in organic farming, as many studies show. This is largely due to the much higher aggregate stability.

The benefit lies not only in the prevention of floods and erosion. Agriculture itself benefits directly when water absorption and storage capacity of the soil increases. This not only helps to prevent erosion. Crop security increases significantly when soils have a balanced water cycle and can store water well.

There is a conclusion reached by the Commission for Soil Protection at the German Federal Environment Agency (KBU) in its position paper “Soils as water reservoirs” (in German): organically managed soils store significantly more water than soils on conventional farms and are therefore in better condition to prevent flooding.

“The main reason for this is clearly the significantly higher biological activity of organically managed soils and not just their soil organic matter content“, the scientists emphasised.

Modern flood risk management must focus much more on different agricultural management effects: a more attentive approach to soil biodiversity soil management is urgently needed, not only to safe food security but particularly for flood protection!

#SoilMatters – So How Did Our Authors Treat It?

Andrea Beste is a geographer, agronomist and soil scientist. She wrote her PhD thesis on soil evaluation in a tillage survey and developed the field method “qualitative soil analysis”, which can be used by every farmer.

2001 she founded the Institute for Soil Conservation & Sustainable Agriculture (Büro für Bodenschutz & Ökologische Agrarkultur) in Mainz, Germany. The Institute offers international analysis and consultancy services in the fields of soil conservation and sustainable agriculture as well as in agro- and food-policy. Since 2008 political consulting to members of German Bundestag and European Parliament.

Since 2017 Beste is permanent Member of the Expert Group for Technical Advice on Organic Farming (EGTOP) to the European Commission.

What do we count, when we count greenhouse gas emissions? What’s anthropogenic and what’s not? And how does this all relate to the food system? Gunnar Rundgren explores. […]

On Wednesday the 10th of July an estimated 2,500 farmers took to the streets of Dublin to protest against the proposed Mercosur deal. The protest was organised by Beef Plan, a voluntary not for profit organisation set up in October 2018 by a small group of farmers from Meath (in Ireland’s centre-east). Since then, its membership has grown to over 20,000. So who are they and what do they want?  […]

From Mud Angels to Soil Angels

Europe needs – and is getting – itself some soil angels. Who are they? What do they do? And where do mud angels (!) come into it? Mario Catizzone explains […]