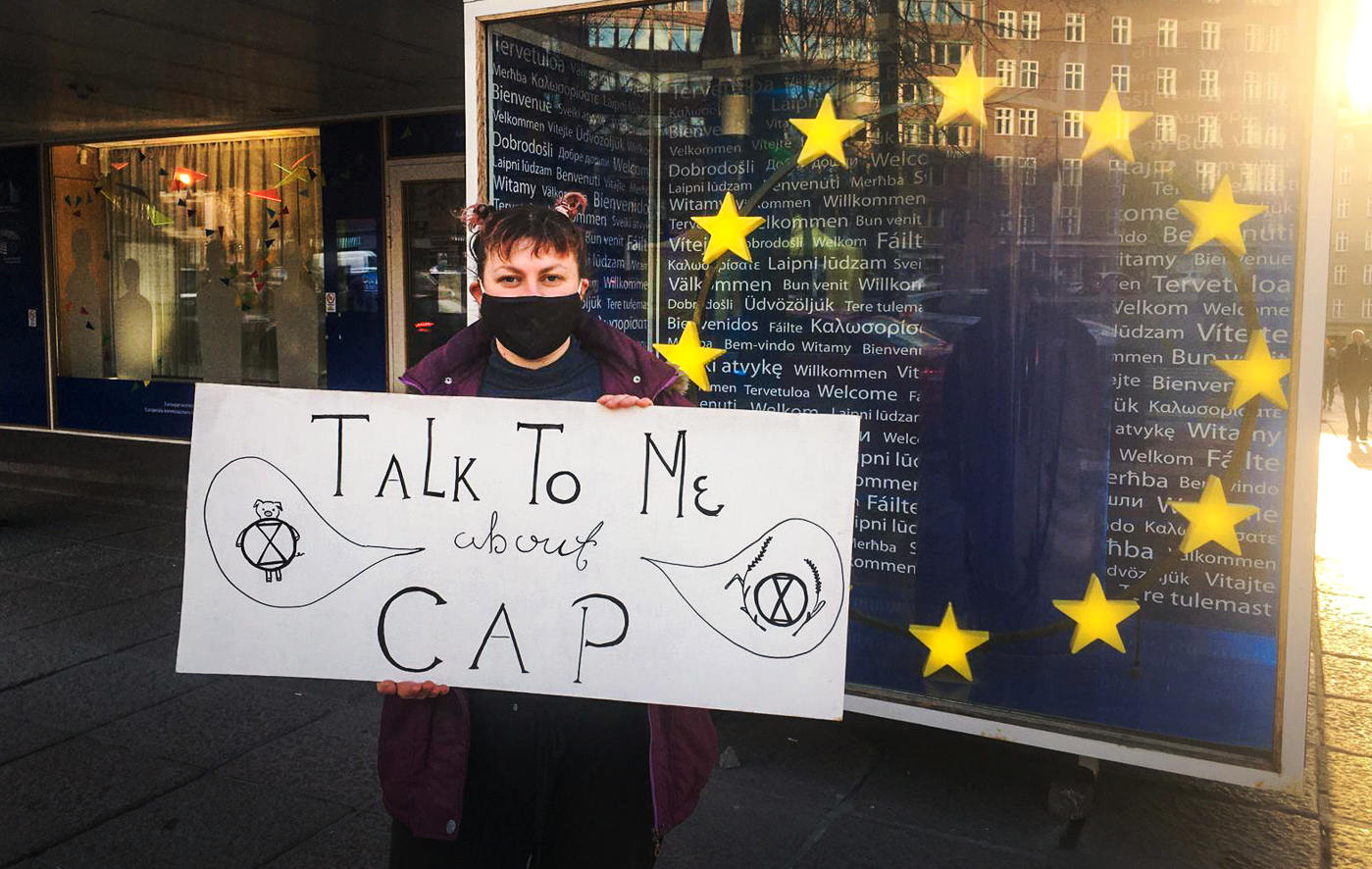 This op-ed comes from climate striker Sommer Ackerman. Sommer became active in protests for a better CAP in October 2020.  She combines activism at EU level in the WithdrawTheCAP campaign with activism at national level to make agri-food policy change in Finland. Here Sommer shares her interest in the CAP, her passion for alternative food systems and why she believes that an issue as important and consequential as EU agriculture policy should not be so far removed from the public.

On the 23rd October 2020 the European Parliament voted for a reform of the European Union’s Common Agricultural Policy (CAP) that will decide how agricultural subsidies will be implemented for the coming 7 years. Essentially the CAP provides subsidies in the EU to farmers and its main purposes are to ensure stable and affordable food, ensure the livelihoods of farmers, promote sustainable management and maintain rural areas and landscapes. At the moment the current CAP reform promotes overproduction and industrial agriculture at the expense of the climate, biodiversity, small scale farming and global justice. On the 16th of November, I decided to go on hunger-strike and participated in a peaceful roadblock with Elokapina to demand the necessary changes be made on a national level. The action became national news in Finland and I am now a near full-time campaigner on CAP. How did this all happen?

I became interested in the CAP in late October 2020 when I joined in with a social media campaign calling to #VoteThisCAPdown. Learning about the CAP was a huge learning process for me, while I found it very interesting, I found it frustrating at how difficult it was to learn about CAP as it is made up of many different complex parts. Agriculture is something that affects us all, even if we feel so removed from the process. I have been working, volunteering and living on small sustainable farms across Europe for a few years now. It began as a hobby of mine and then I realised that I loved being hands-on with alternative food systems and decided to adapt farming into my lifestyle, though I am not formally educated in agriculture. My passion for the CAP comes from my belief that there is now a disconnect between people, farming and nature; I see this to be a problem because now more and more people do not know where their food comes from. This is not the first time the CAP has been protested and it won’t be the last.

I am in a collective of international activists who focus on campaigning to withdraw the CAP. The collective is made up of members who are part of Fridays For Future; however, there are many people with different backgrounds in the group such as scientists, people working at NGOs and just ordinary people. When it came time for the new CAP to be voted on this group formed in order to make a social media campaign asking for MEP’s not to vote in favour of a new CAP reform. The website WithdrawTheCap was made in response and a letter was published asking for the CAP to be withdrawn with over 71 thousand signatures. From there we got in contact with scientists, MEP’s and organisations asking for their help and information. After the campaign reached 50k signatures the letter was sent to members of the Commission and to the media, but initially there were not many replies. The group has had several meetings with the Commission including Frans Timmermans, Vice-President of the European Commission and Wolfgang Burtscher, Director General of DG Agriculture and Rural Development.

Aside from my work on an EU level, I felt it was important to try and make change here in Finland. I decided to go on hunger-strike and participated in a peaceful roadblock with Elokapina to demand changes be made on a national level. Here were our demands:

Overall, the protests went well and it ended with several representatives from Elokapina speaking to some members of the ministry about our demands. We agreed with the ministry that we must work together on the CAP, however, since then there has been no follow up. In February, I took part in a conference held by Birdlife Europe ECA and Good Food Good Farming and spoke about Elokapina’s protests for a better CAP. It was there that I got reconnected with several activists and then we began to work on a list of demands that will be sent to the Ministry of Agriculture for creating a CAP that favours biodiversity, provides fairness to farmers and takes the climate crisis seriously.

Finland must take social responsibility for its ongoing role in contributing to the climate crisis. Finland and Finnish companies are constantly exploiting nature and biodiversity, in order to profit from its destruction. Finland must be more ambitious with its emission reduction targets, biodiversity and nature protection. Finland must recognise how the decisions made in our own country not only affect our own citizens but how they affect the land and communities in other countries and continents of the world. It is well known that the richest people are responsible for more global emissions, while the poorest are responsible for the least. The people and areas most affected by climate change live mainly in the Global South. Finland must take social responsibility in realising the destruction caused by the agricultural sector not only jeopardizes Finnish citizens, but jeopardizes more the lives of those who produce the least emissions and suffer the most from them. Additionally, this is a matter of public interest and therefore the discussion about CAP must be made as transparent and as democratic as possible.

The CAP was established in the 1957 Treaty of Rome but was first implemented in 1962. The point of the CAP throughout the years has been to increase productivity, enhance the income of farmers, ensure food supplies amongst other things that are meant to be good for farmers and for citizens, although as the reforms have gone on it also is meant to foster sustainable developments and also contribute to the protection of biodiversity. Essentially the CAP is now an agricultural funding policy which is essentially a tool to implement subsidies. CAP accounts for approximately 36% of the total EU budget and comes from taxpayer’s money.  In Finland, the allocation of CAP funding for 2021-2027 sees 900 million euros per year of EU money and around 1100 million euros per year of national funding allocated to agriculture and rural development.

The EU agricultural support system consists of two pillars 1) direct payments and 2) rural development programmes. The first pillar is about income support and market measures, the income support is granted through different types of direct payments. They are mostly paid per hectare and are conditional to various environmental regulations. The problem with this system is that the majority of CAP subsidies will be directed towards intensive farming, rather than looking at the interests of organic sustainable farming. At the moment 20% of the recipients (the farmers and the agricultural industries) receive 80% of the CAP’s budget.

The second pillar goes to rural development programmes, which supports things like agricultural environment climate measures, payments for organic farming and Natura 2000 sites (protected nature areas). These three are seen as ecologically effective despite some concerns that these agri-enviro schemes are quite an expensive way to do conservation. The other part the second pillar gives money to instruments like supporting rural areas.

Along with being passionate about the CAP because of my background in farm work, the other reason that I am passionate about the CAP is that I want topics like this not to be complicated and so far removed from the public. It is important to educate people on matters that affect us all. Agriculture is so complicated and we now take our food for granted. It is not radical to say that food / agriculture is now political. You can import food from far away countries for cheaper prices and that just isn’t right, when did this become acceptable? It has become twisted because of policies like the CAP. The agricultural industry is now run by lobbying and the honest farmers who care about the people, the animals and the climate are no longer valued.

The media and the governments, in my opinion, are failing to educate and bring attention to important issues such as CAP. Recently the media has focused on trivial issues such as renaming vegan burgers while not talking about the very thing that even allows burgers to exist. It may seem like things bigger than us are impossible to change; however, change is always possible, just in some cases there is not enough political will. We, the people, cannot always be in the room, but we should be there when it matters. We must demand more from our media; we must demand more for our governments and ministries.

This article originally appeared on the Nuorten Vuoro blog and is licenced under creative commons attribution.

*Sommer Ackerman is a 24-year-old environmental activist from the UK but living in Finland. She is part of the WithdrawTheCAP campaign and has been involved with sustainable farming projects across Europe.

More on the CAP:

The role of farming in climate change mitigation is controversial and fraught. The UN COP (Conference of Parties) Climate Change has tentatively introduced soil and carbon sequestration into its workings, via 4 pour 1000. However the role of particular agronomic practices involving livestock is under special scrutiny. Does livestock release more than it sequesters, or does the farming model matter? What about deep carbon storage? And how will policy makers work with new research and 4p1000? […]

As a major agricultural nation in the east, Poland has a significant interest in how CAP will unfold in the current reform process. While not all regions or sectors are the same in this large country, there are some common considerations. Hans Wetzels to get to grips with CAP and Poland, in particular how Polish farmers and Polish policy makers will adapt to likely changes, including a lower overall CAP budget, greater environmental focus and the new delivery model. Part 3. […]