This is the third of a four part series of posts from the FAO’s Regional Conference for Europe in Romania.  For all posts, see here. 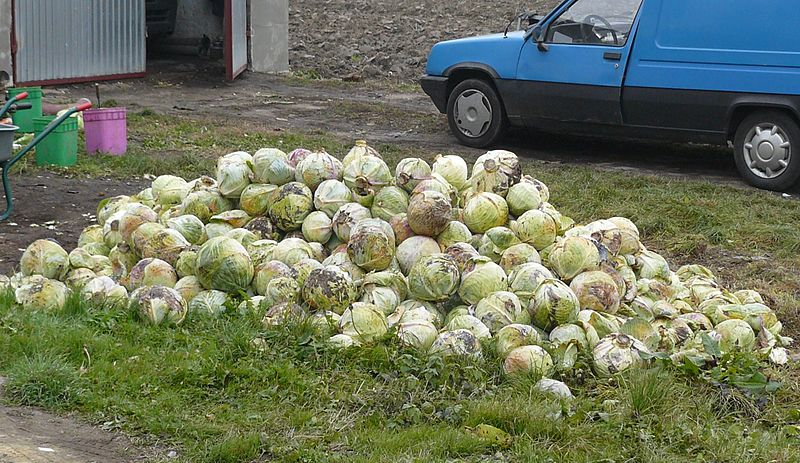 The twenty-ninth FAO European Regional Conference (ERC) and the thirty-eighth session of the European Commission on Agriculture (ECA) “Conference Week” was held at the Romanian Palace of Parliament in Bucharest, Romania, from 29 March to 4 April 2014. It gave a perfect opportunity for debate as the major topic for the Ministerial Round Table of the ERC was “Food losses and waste in Europe and Central Asia”. According to the conference description: “the documentation will improve understanding of underlying causes of food losses and waste (FLW) along selected food supply chains in developing countries of European and Central Asia region and raise awareness on the need for introduction of appropriate policy interventions to mitigate the impact of FLW on food security and incomes of smallholders in the region”.

Food losses and waste (FLW) are generated due to many factors. However, the most prominent issue is overproduction which is caused by industrial agriculture. There has been an ongoing war of words over the quantity and quality of the human food supply. A few questions rest at the center of this battle. What should we produce? How should we produce it? And, how much should we produce? Large-scale producers claim that they provide a large quantity of food in order to stem hunger and thus keep more people nourished in a world with an ever growing population. Small-scale producers say that they provide higher quality food that is more healthy and tastes better. Now, let’s see what other groups think about this topic.

For governments, food security is the goal. They feel that overproduction is essential to ensuring that their citizens will be fed in case of unforeseen emergencies such as extreme drought which could produce famine. Governments offer farmers huge subsidies to encourage large-scale industrial production that will boost the quantity of food reserves. The problem with this logic is that this enormous quantity of extra food is not needed. Even with erratic climate changes and drought, all too often there is a bunch of food left over every year. At some point, those “leftovers” decay and become food waste, others simply don’t reach markets and are even left on the fields due to standardization. It is absolutely correct to say that the people’s money is being used to generate food waste in the form of taxes collected. Therefore, it is crystal clear that governments cannot stop FLW from happening with their current policy. Something must change.

Supporting local markets builds up rural employment and strengthens local economies. Without more support, rural poverty will continue to be high in many areas, especially for peasants. When farmers work for themselves, they always produce enough to feed their families first and then sell the surplus at the local market. When farmers work for companies, they must do what the companies demand … industrial agriculture. They must cultivate what they are told, how it should be done and how much to produce. Food is given to companies first and farmers have little or nothing left over for their families. Ironically, they have to use the money given to them by the companies to go and purchase food from somewhere else. It is very strange to fathom how food producers could not be allowed to fill their bellies every day with what they raise or cultivate. It seems unnatural. If they go to the super market, they could potentially end up buying the food they originally produced. That would be extremely weird. If all of this sounds ridiculous or idiotic to you, you’re not alone.

The public knows that the examples above obviously do not signify food independence nor food sovereignty. However, the average person doesn’t know something vital to the conversation …What is the True Cost of FLW?

The true cost of FLW involves countless things that don’t just instantly pop into someone’s mind at first thought. It would be quite difficult to pinpoint the exact amount of losses for each food production and distribution chain but listing many of the variables involved will provide a much clearer picture of what is needed to support large-scale industrial agriculture. And this is not an exhaustive list by any means.

Due to everything mentioned above, it is apparent that a decentralized food system is needed. Such a system would not be prone to speculation and commodity markets which cause FLW. This would satisfy local needs and reward producers not middlemen and retailers. The position of civil society is crystal clear on this, now let’s see how Governments approach it.

Simplification should work for peasant farmers and not to generate fund-grabbing by the corporate sector, as Maria Rodriguez Beperet explains. […]