French farm minister Stéphane Le Foll first launched the word “agroecology” as a national policy priority as part of the produisons autrement campaign last December, after taking office in May. As the minister continues to draft his bill for the future of French agriculture (Loi pour l’Avenir de l’Agriculture or LAA) which will be debated later this year, he made a point recently of adopting a simple agroecological measure using existing agreements and organisations. 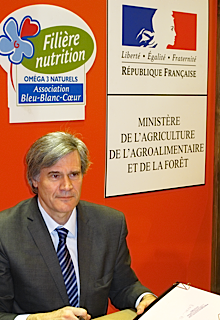 During the Paris international farm show (SIA), the French government signed a collective agreement that will ensure that a further one million French consumers will be able to cover their daily intake of omega-3 fatty acids between now and 2016. The association Bleu-Blanc-Coeur (BBCoeur) links food and forage producers to food manufacturers and retail outlets: by promoting the growing of flax as an oilseed crop, alongside other forage crops such as alfalfa, BBCoeur generates a number of virtuous cycles with a basis in science.

By feeding high omega-3 forage crops to livestock, the animals themselves live healthier lives, laying down less saturated fat in their bodies, as well as passing on beneficial effects in milk and eggs as well as meat. The collective agreement sets a headline target of putting 750 tonnes of renewably sourced omega-3 fatty acids into the human food chain. In turn this will eliminate 2,240 tonnes of saturated animal fats from the food chain, which BBCoeur estimates is equivalent to a saving of 6.5 million litres of palm oil in the national diet.

BBCoeur represents a substantial volume of production. The previous day, national retailer Système-U signed an agreement to source all its eggs from BBCoeur members, who produce over 72 million eggs a year. By 2016, there will be seven times that volume available with the emblematic blue flax flower logo.[take in logo-graphic]

Many of the other food manufacturing and retail partners are household names, too: national players like Danone, liquid milk brand Candia, charcuterie maker Fleury Michon, edible oils processor Lesieur stand alongside retailers Carrefour, Casino and Intermarché on the BBCoeur platform.

The focus on the transfer and value of omega-3 fatty acids is a key aspect of the scheme. It gives mainstream producers a chance to be involved and widens the accessibility of omega-3 to French consumers. It is a starting point for change upstream, too.

The BBCoeur agreement will add just over 21,000 hectares of flax, 12,000 hectares of alfalfa-rich grassland and 18,000 hectares of vegetable protein crops to the French countryside. This will also mean that 65,000 tonnes of Latin American soya will not need to be imported and the French livestock sector will not need to find 160,000 tonnes of maize, a notoriously thirsty forage crop. It will also save the equivalent of 231,000 tonnes in carbon dioxide emissions from ruminants: this figure is arrived at by a method that was developed by BBCoeur and is recognised by both the United Nations and the French government.

In terms of government policy, these are all pragmatic steps in the right direction. They give mainstream food producers an opportunity to step off the technological treadmill momentarily, even if they are not going to be transform the food industry into exemplary ecological enterprises overnight.

Healthy eating and nutrition have been on the French government agenda since 2001, when the Plan National Nutrition et Santé (PNNS) started the first of a number of five-year cycles. It was joined later by a national food plan, the Plan National pour l’Alimentation.

Preparatory studies carried out in the 1990s, ahead of the PNNS, demonstrated that a very small health education budget spent during primary education years could generate huge health budget savings. Most notably, the studies carried out in the Lille dormitory suburbs of Fleurbaix and Laventie suggested that the funding requirement to deliver the necessary educational programme was trivial.

BBCoeur has been a supporter of the PNNS programme from the outset and has, at intervals, contributed to the pooled nutritional knowledge in a becalmed political process. With last year’s change of government, the renewed political commitment to act on a range of broad food and farming issues is breathing new life into the development of policy.

The French government’s collective agreement with BBCoeur is built on generating measurable results between now and 2016. For instance, BBCoeur-accredited farmers will account for 2.3 million or one in ten of all French pigs a year by 2016, a doubling in current levels. A seven-fold increase in today’s BBCoeur-accredited egg production will mean more than 500 million French eggs a year (4% total current production) will carry the association’s  little blue flax flower logo. A three-fold projected increase in BBCoeur-produced rabbit will account for 16% of total production by 2016 on current figures.

The scientific basis for the association’s omega-3 credentials was overseen by Dr Bernard Schmitt, BBCoeur co-president. As a result, the association was authorised by the French state to describe its products as “natural sources of omega-3 fatty acids” while BBCoeur eggs carry a more extensive statement. The association’s national recognition predates the European decision for all such schemes to be overseen by EFSA, which has yet to approve any similar schemes. “We had a visit from some Slovenian pig researchers with a similar project in mind,” Schmitt told ARC in Paris, “but they were getting nowhere with EFSA accreditation.” BBCoeur already has Italian and Swiss companion associations, so there is even a way of breaking the EFSA logjam.

French-German Alliance calls for CAP Reform Based on Principles of Sustainability, Solidarity and Justice

A number of NGOs, farmer and consumer organisations have issued a joint statement in French and German, calling for a fundamental CAP reform. Read our exclusive translation. […]

French parliament register of accredited lobbyists is being cleaned-up […]