Just days after I started helping out on a Greenpeace project to protect bees from harmful pesticides, a swarm of bees came to build a colony just outside my window. In a different situation I would probably have panicked, but instead, surrounded by information regarding the global decline of bee populations and their value as pollinators, I was quite happy to sit and observe the busy swarm. 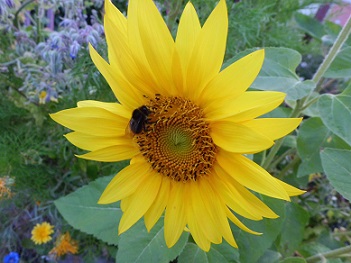 Many people may not realise that around a third of all our food depends on bee pollination. In Europe alone, the growth of over 4,000 vegetables relies on the essential work of these pollinators. Many of our favourite fruits and vegetables will simply disappear if bee numbers continue to drop. A recent visual from Huffington Post shows how the supermarkets might look if bees vanish.

The economic value of bees’ pollination work has been estimated to be around €265 billion annually worldwide. So even from an economic point of view it is worth taking measures to save them.

In order to shed more light on the ongoing disappearance of bee populations, Greenpeace published a scientific report Bees in Decline. Published in April 2013, the report highlights multiple factors such as diseases and parasites, climate change, and wider industrial agricultural practices. Among the latter, scientific evidence highlights the deadly role of some pesticides, including the mass-killer neonicotinoids. Besides acute poisoning that leads to immediate bee death, the observed sub-lethal, low-dose effects of such pesticides range from physiological effects, perturbation of the foraging pattern, interference with feeding behaviour and neurotoxic impacts on learning processes. The ability of bees to resist diseases and parasites seems to be directly influenced by their exposure to such toxic chemicals, with catastrophic consequences for the health and survival of honeybees and other wild pollinators.

Although EU Commission proposals to ban four bee-harming pesticides have been backed by Member States (clothianidin, thiamethoxam, imidacloprid and fipronil), not all countries backed the bans. Furthermore, they are only short-term bans of two years. Environmental NGOs and Beekeeper Associations agree that these partial bans are a step in the right direction, but they will not do enough to recover bee populations. What is needed is a long-term ban.

Greenpeace is calling all European citizens to join a campaign and sign a petition addressed to EU Ministers asking them to:

Greenpeace Greece has also launched a new website as part of the campaign to increase awareness of the issue and mobilise people in the country. It was a big disappointment to see the Greek Agricultural Minister vote against the prohibition of the first three neonicotinoids during the initial vote, and then abstain in the final vote. Greece did however vote in favour of the most recent proposed ban of Fipronil: a positive step.

Stay tuned for the results of the research in the Greek bee landscape.

Current legislation on pesticide use and data collection is insufficient both for reaching reduction targets, and for assessing whether or not the goal was even reached. Now, a leaked version with new elements of the proposed reform to the Sustainable Use of Pesticides Directives (SUD) has escaped into the Brussels bubble. The document outlines options for planned reforms by the EU Commission set for March 23.  So what’s in the leak?  Ashley Parsons reports. […]