What is the scale and impact of pesticides in agri-food? Where is power expressed, and what are the costs associated with the use of these agri-industrial inputs? A new concept note and policy brief ‘Pesticides: a model that’s costing us dearly. An initial cost-benefit analysis of the pesticide sector at the European level’ throws some light on the topic. Op-Ed by Le BASIC – Christophe Alliot, Sylvain Ly CCFD-Terre Solidaire – Maureen Jorand Pollinis – Nicolas Larmaan PAN-Europe – Martin Dermine and CEO – Hans Vanscharen.

Pesticides are one of the key drivers of agriculture evolution: global sales have doubled in 20 years and the world market, worth €53 billion, is all in the hands of a few multinational corporations. Despite their huge socio-economical, health and ecological impacts, this is not being acknowledged enough in the European debate on food production. 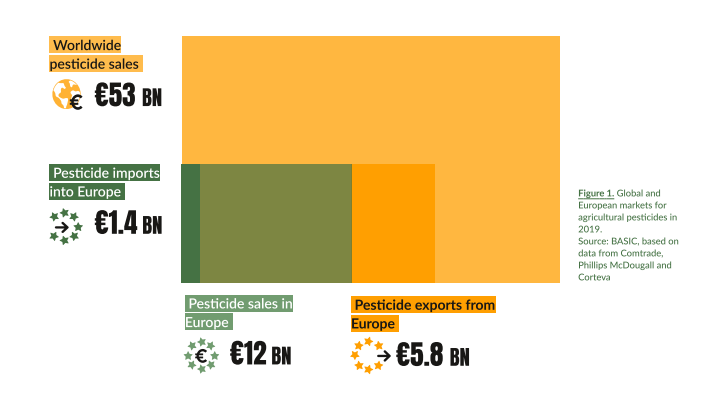 Only 4 groups (Syngenta-ChemChina, Bayer, BASF and Corteva) make up 67% of world sales, and this highly concentrated sector is partly controlled by a set of 5 US Investment funds and the Chinese State. The trick for this toxic business to remain profitable is a classic one: cash as much profits at the expense of societies and ecosystems who pay dearly for the hidden costs.

While the EU is revising its Sustainable Use of Pesticides Directive and targets a 50% reduction in pesticides use by 2030, a report published today reveals specific figures on the real socio-economical costs of pesticides use.

The total costs paid by society amounts to €2.3 billion in 2017 in the European Union, more than twice the sector’s annual net profits. The costs are mostly related to water decontamination, Green House Gas emissions and farmers diseases caused by these chemicals, but also to a generous half-a-billion subsidy which is allocated to the pesticides sector, mostly in the form of VAT reductions. And this is only the tip of the iceberg: these figures do not take into account wider impacts and other subsidies, notably those of the EU brand new Common Agricultural Policy (CAP). 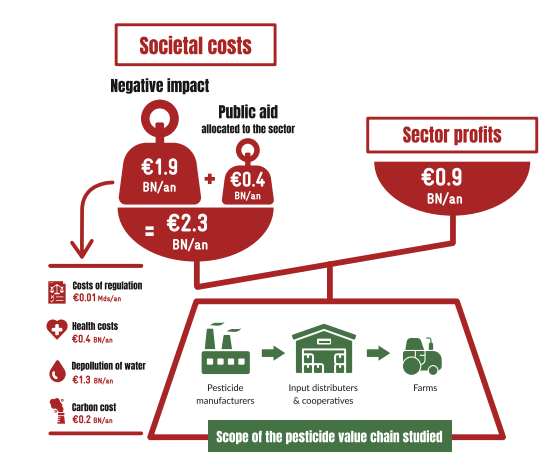 If pesticides companies were held accountable for the various detrimental impacts of their products and had to pay for associated costs, this industry could simply not survive economically.

Meanwhile, the EU keeps supporting pesticide companies and promoting their promise of a new agricultural revolution, based on robots, big data and biotech to “feed the world”. In reality, this revolution intends to maintain pesticide use as long as possible with expensive tools that will increase the dependence of farmers and food systems on non-renewable resources and on a few input providers.

Behind this glamourous 3rd revolution lies another shameful truth: the industry’s international growth relies on the export to developing countries of pesticides, part of which are banned in Europe due to their toxicity.

At the beginning of September, President Emmanuel Macron announced his willingness to act on pesticides during the French presidency of the Council of the European Union. The floor is his, as there will be no lack of opportunities in the coming months to take strong measures for the benefit of farmers, citizens and our environment.

Downloads in French and English

Rebugging the Planet – new book on where invertebrates fit in

Hans van Scharen, born in Brussels, studied Journalism in The Netherlands and worked as a journalist for newspapers, magazines and television in both Belgium and the Netherlands for over 15 years. For a decade (2009-2019) he worked as parliamentary assistant to Belgian MEP Bart Staes in the European parliament, focussing a lot on agricultural and food policy related issues like pesticides, food waste, seeds and trade. Since the start of 2020 he works as media officer for the Brussels based research and campaign NGO Corporate Europe Observatory (CEO) and works as freelance journalist.

The Eastern European entrance of Lidl and Kaufland, supermarket retail chains owned by a German corporate group, were financed with loans from public money. According to an investigation by The Guardian, almost 900 million Euro of public funds coming from the World Bank and European Bank for Reconstruction and Development (EBRD) were injected to develop hundreds of supermarkets packed with cheap, imported food. This leaves peasants and other local food producers, largely ignored by these retailers, unable to compete. These public institutions, funded by taxpayers and owned by governments, have explicit mandates to increase local development in the countries where they spend their money. The World Bank also has an additional, specific mandate to reduce global poverty. An International Consortium of Investigative Journalists found that 1,000 World Bank projects approved between 2004 and 2013 forced 3.4 million people from their homes, grabbed their land, or damaged their livelihood. The banks claim that their funding for Lidl and Kaufland would create jobs, opening new markets for local producers and bringing “good quality, affordable food” to poor […]

Bees versus neonicitonoids: second vote due

ARC2020, along with 28 other organisations, wrote and co-signed a letter on the unacceptable delays in introducing the EU’s pesticide regulation, called SUR (Sustainable Use of Plant Protection Products). Below is the full text of the letter, which was sent to Ministers for Agriculture, Environment and Health, the President of the European Parliament, AGRI and ENVI coordinators, and members of the AGRI and ENVI Committees.  […]