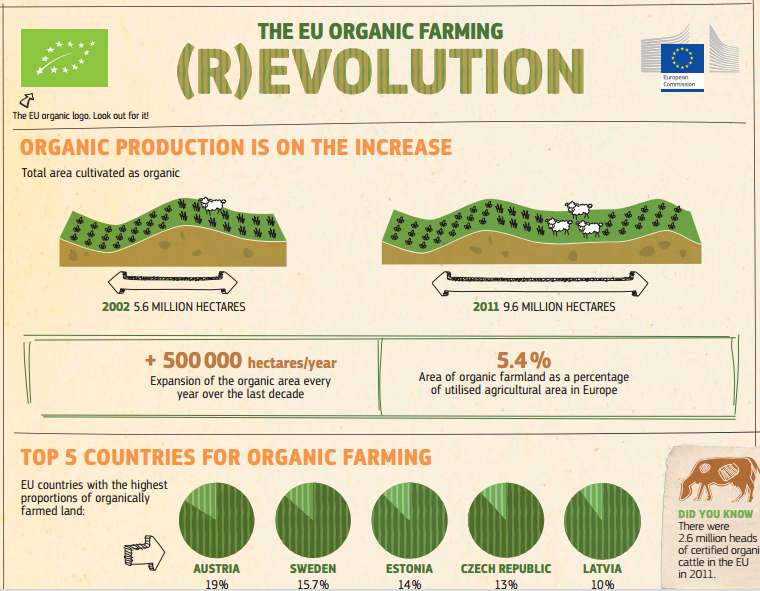 Payment rates will increase for organic farmers and those in conversion to organic considerably, should the EU Commission approve the Irish Department of Agriculture’s Rural Development plan.

Currently organic farmers in Ireland are paid E106 per ha, while the two year conversion period pays the higher rate of E212. This is one of the lowest rates in Europe.

According to Gillian Westbrook of Irish certification body IOFGA, payments in Ireland have been the 8th lowest out of 22 comparable member states for grassland; second lowest for arable; lowest for both vegetables perennials/orchards fruits.

This is now set to change. Conversion is set to marginally rise to E220 per ha, but the big change is for the full symbol (also called maintenance) rate. This jumps toE170 per ha, an increase of a full E64 per ha.

In addition, a top-up of €30 per ha for red-clover is included. The higher horticultural rates will apply to the first six hectares only; thereafter the standard rate applies, according to the Department.

Another significant element is that registered organic farmers “will qualify for priority access” to the agri-environment scheme GLAS under Tier 1, subject to some conditions.

The accompanying literature from the Department explains some of the rationale behind these changes.

Unsurprisingly, with maintenance rates in Ireland so poor by European standards, feedback given to the Department by farmers and their representatives pointed to increased supports as being a core need: “A theme emerging from stakeholder consultation is that the additional support for farmers via the Organic Farming Scheme is the key factor underlying conversion and promoting continuance within the sector” as they put it.

Perhaps unusually, the Department was quite frank in their language: “The fact also remains that the scheme in its current form is not convincing enough farmers to convert to organics and meet the demand that exists for organically produced food.”

They add: “the option may be taken now to annualise the total payment, to standardise the rate across the five years of the contract, and in this way to support ongoing participation in the sector.”

Ireland lagging so far behind the European average of land certified organic was also cited by the Department as a driver in increased supports for organic farming.

Extra supports are to be made available for red clover “both for its value as a source of high-protein, high dry-matter organic fodder, as well as for it environmental benefits as a natural nitrogen-fixer.”

Gillian Westbrook, IOFGA General Manger, welcomed these changes, changes she has campaigned for ,and included in IOFGA’s submisison to the Department’s Rural Devleopment Plan. “Irish organic horticulture has huge potential to develop within the home market alone, as does the dairy sector where demand currently outstrips supply. Added value opportunities for both the home and export market for the organic sector have yet to be fully realized, and the proposed funding rates are encouraging at a time when Bord Bia is reporting an exponential increase in EU sales of organic food.”

She added: “Beef and lamb processors are actively seeking export markets but they do need to ensure continuity of supply, therefore the increased per hectare supports for grassland farmers as well as the coupled Beef Data and Genomics Programme will give the market the much needed confidence to develop.”

Westbrook was, however, less convinced about the changes in Tillage. “To what extent the proposed rates for tillage farmers will encourage more uptake of organic cereal production is debatable. The conversion period for organic tillage is particularly costly and IOFGA had hoped for more targeted support for this sector in order to address the bottlenecks in supply and encourage more self-sufficiently in the feed chain. However, the recently announced coupled payment available to all farmers for protein crops should encourage self-sufficient protein supply as it is an area that urgently needs development within the organic sector.”

She added “other measures within the RDP, including the dedicated Capital Investment Scheme and GLAS will play an important role to compliment the agro-ecological whole-farm approach as adopted in organic production.”

IOFGA on the new organic supports in Ireland

Ireland and Northern Ireland on Arc2020

The measures already decided for CAP implementation in Spain […]

Can EU CAP it?

94% of all the EU’s ammonia pollution comes from farming, with nitrogen fertilizer use (both mineral and slurry) and increasing animal numbers seen as drivers. Human respiratory health, soil and water quality are just some of the concerns with excessive ammonia pollution. Here we point to some ammonia troubles in the EU. […]