In August, the Savory Institute hosted Putting Grasslands to Work, an international gathering of the institute’s Holistic Management practitioners in London to discuss pastoral landscapes as integrated systems. Biologist, farmer and former Zimbabwean politician Allan Savory (right) puts grassland management above all else, because it accounts for two thirds of the planet’s agricultural land.

Savory argues that industrial agriculture has failed, driven by narrowly-focused, reductionist science and bringing with it climate change and soil erosion on a catastrophic scale. The problem arises from not taking into account the relationships between component parts of the biosphere. In short, reductionists are better at taking things apart under a microscope than they are at assembling a bigger picture from their observations.

A few days later, in a bid to simplify the environmental issues for urban populations, Guardian columnist George Monbiot took the term grassland management and translated it into the headline Eat more meat and save the world: the latest implausible farming miracle. With the bit firmly between the teeth, Monbiot went on to accuse Savory of every mortal sin known to reductionist science, short of selling snake oil.

In a telling passage, Monbiot implies that every live bovine is no more than a pair of sides of beef walking around before undergoing slaughter and conversion into a form that town dwellers will be able to buy and consume. “Savory’s grazing technique, which he calls ‘holistic management’, could, in other words, reverse not only desertification but also climate change – while permitting us to keep consuming vast quantities of meat. No wonder it has been received with such enthusiasm.”

The years a bovine spends grazing, trampling and manuring grassland are also years during which countless soil bacteria and other organisms interact with grazing animals. Remove large or medium herbivores from a piece of land and an adverse impact on biodiversity in the vicinity is inevitable, not to mention disruption to carbon and nitrogen cycles.

Human activity is rapidly changing the natural world in ways that neither governments, still less scientists, can either control or anticipate. Take the higher organisms out of any food chain and fundamental change will be readily visible in quite short order. For instance, for the past decade, the Mediterranean has been rapidly filling up with jellyfish, now that higher level predators, like tuna, are fished out.

What reductionist science cannot conceal is that the planet’s resources to sustain high input agriculture are finite. Like economists, who are selective in the inputs they use for economic modelling, scientists and economists alike will sooner or later be confronted with the consequences of this external reality. Economists refer to such inconvenient truths as “externalities,” a euphemistic phrase par excellence befitting of economics as both a dogma and a discipline trying to be a science.

Neither science, nor technology, still less political rhetoric, is going to save the planet, which can manage without human race and does not need saving. What we need to do, as never before, is rethink our place in the world before the world does it for us.

There are four fundamental insights that drive Allan Savory’s vision of Holistic Management (HM) for grasslands and the livestock that moves across it. The straight-talking scientist came to London in August to share his knowledge and insights with an international audience, including existing HM practitioners at a two-day conference in London.

As well as following a scientific career, biologist Savory has also been a game ranger, soldier, farmer and politician in Zimbabwe. His science is as challenging as his background, for its radical simplicity. He advocates nothing less than a deep paradigm shift, whose time has come, he argues.

Far from seeing livestock holdings as a problem, he sees the right kind of livestock management as a vital step to improving the landscape and the outlook for life on the planet. This insight directly challenges the conventional view that desertification arises from livestock without taking into account animal movements: in the past, predator activity kept populations of large herbivores on the move. “It is the disturbance of these animals’ hooves that acts on the ground to incorporate dung and urine to the soil,” he explains.

Savory’s argues that nature can only work on whole systems, referring back to Jan Smuts, who described holistic principles in 1926: “…scientists will never understand nature until they understand that it only functions in wholes and patterns,” he argues. While component parts of nature may be viewed under a microscope, the role of an organism in the biosphere is as important as any notion of how it might function in isolation. “Nature works on whole atoms, whole molecules, in whole systems and patterns.”

This is more than lucky happenstance, however: “Timing is everything,” Savory adds. The length of time livestock grazes a specific piece of land is crucial to the wellbeing of animal and land alike. The rate at which plants and soils respond following grazing and trampling governs the outcome. At the heart of Savory’s concept of brittleness scale for environments, is the distribution of humidity throughout the year, in which healthy rain forests measures a 1 and arid desert scores a 10. Across this scale, dependent on distribution of humidity rather than total rainfall, the decay of annually dying above-ground plant material differs – being dependent almost entirely at the lower end on micro-organisms in abundance in the gut of herbivores at the other end. 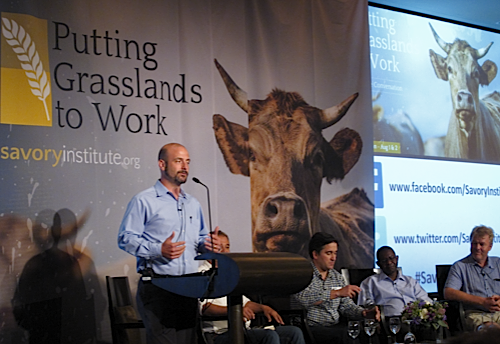 For years, applying the principles of holistic management has helped thousands of practitioners all over the globe to prove the validity of Savory’s insights, which have also been investigated by scientists around the world. Today, faced with failing industrial agriculture, “catastrophic” soil erosion, climate change arising from human activity, Savory argues that there is an alternative strategy. The first step is the recognition that: “…our economic models, based on the flawed presumption of infinite growth in a world of finite resources, are inherently unsustainable.”

In May 2013 Savory told the All-Party Parliamentary Group on Agroecology at Westminster that: “Agriculture is not just crop production, it is the production of food and fibre from the world’s land and waters and is the basis of everything.” He went on to explain why agricultural policy was far too dangerous to leave in the hands of narrowly trained experts advising politicians but needed to be developed holistically.

Savory’s appearance in the palace of Westminster marked the opening of a global speaking tour for the eponymous Savory Institute. He travelled thousands of miles before the one-time farmer, game ranger and parliamentarian returned home after a marathon environmental crusade.

“Agriculture has caused climate change,” he warns. There is no mistaking the irony that Nobel, the maker of cordite, should have a peace prize in his name and yet there is not a Nobel prize for environmental good practice or farming. Yet, Savory adds, “…more civilisations have been destroyed by agriculture than armies.” Nor have any of them ever risen again.

Our four part livestock debate, which considers less and also no livestock options.

By Shefali Sharma, European Director IATP, 12.07.2016 The Institute for Trade Policy’s European Office, along with international group Compassion in World Farming (CIWF), German member of Via Campesina—Arbeitsgemeinschaft bäuerliche Landwirtschaft e.V. (AbL) and PowerShift launched their new report Selling Off the Farm: Corporate Meat’s Takeover through TTIP with a panel discussion and a press briefing at the European Parliament on the 12th July. Some key findings from the report: Many new agricultural and food technologies are being developed or already utilized with limited or no regulation. TTIP will make rulemaking in the public interest much more difficult in the future for technologies such as gene editing and cloning. Labour and environmental regulations related to the meat industry are inadequate on both sides of the Atlantic and need to be strengthened. Trade unions and environmental campaigns have achieved incremental gains; however, TTIP is likely to make it difficult to improve regulations. The chilling effect of TTIP’s (de)regulatory cooperation provisions will make it increasingly challenging in the future to effectively regulate impacts of the meat industry on climate change […]