This week, the European Parliament and the Council of Ministers have set a direction for CAP which fundamentally ignores the Commission’s European Green Deal (EGD), and, by extension, the biodiversity and climate crises that led to the EGD.

Though the Parliament is still voting, by voting against Amendment 1147 – to reject the legislative CAP Reform Proposals outright – and instead to accept all common amendments as proposed by the deal brokered between the EPP, Renew Europe and S&D –  the die has been cast.

Despite many public statements by MEPs, and an intervention by Greta Thunberg on twitter, majorities were quite similar all the way through, suggesting MEPs who protested the speed of the vote, nonetheless voted along party lines. The first batch of Amendments were typically carried by 430+ MEP votes. 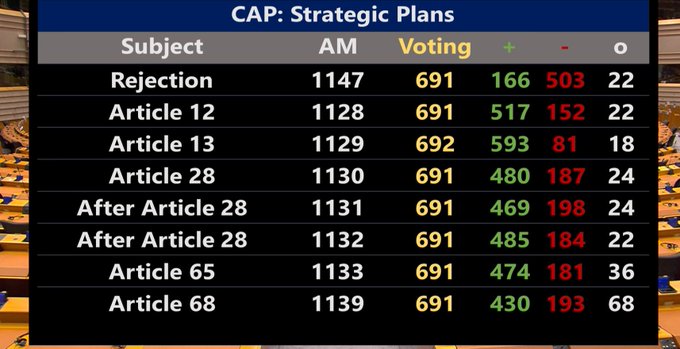 All amendments voted on can be found here

The articles in question, which were passed last night (Tuesday), included important ones on ecoschemes (28,28a, 28b), ANCs(65), spending (86, rural development 90, financial allocations 86, tracking climate spending 87, pillar transfers 90) and annex III and article 11 on conditionality. The latter, on GAECs and SMRs were exceptionally bad, while one of the few positive notes – article 1127 on 10% for nature – was just a recital and less legally binding.

Indeed today (Wednesday) amendments 1199-1201 to integrate EGD targets into CAP were all rejected. This means that hundreds of MEPs voted for the recital, but then voted against actually having a target.

What is supposedly ”enhanced” conditionality will, as per the Parliament’s position, now allow for ploughing in natura 2000 permanent grasslands and a far smaller area dedicated to high diversity landscape features (only applicable in arable land, at 5%, not 10% as per EGD) and other GAEC and SMR adjustments.

The Parliament position means that 60% of farm subsidies are spend on basic income support and other related non-environmental payments. As we reported earlier, the Parliament’s position is one that now includes eco-schemes as having an economic element, including precision farming, which was never the intention for eco-schemes in the Commission’s first CAP communication. While eco-schemes are ringfenced at 30%, based on the Council and likely trialogue outcomes, this supposedly ringfenced money will actually be transferable out to other areas of Pillar 1 if uptake is low, and for at least 2 years.

ANC (Areas of Natural Constraint) spending is set at 40% of the Pillar 2 environmental spending. ANCs may be circumstantially environmentally beneficial, but they have not been established as such by evidence.

These votes come after, earlier in the month, the same Parliament also voted for a 60% reduction in greenhouse gas emissions  – up from the current 40%. Agri-food will now find it very difficult to paly its part in reaching this sort of target.

The remaining votes being cast between now and Friday will only concern articles that were not covered by these compromises, so there is far less of relevance left, apart from capping, to vote on.

There is enormous pressure on the GAECs and SMRs, from both the Council and the Parliament. In this vote, GAEC 8 has been changed for simple “crop rotation” to the following: “Crop rotation in arable land, including a leguminous crop, except or crops growing under water”. Despite the typo (presumably its “for” not “or”) this  would exempt Italian rice for the requirement, which is no doubt convenient for some in S&D group leader Paolo De Castro’s Italian constituency.

The amendment to GAEC 9 says: “Minimum share of 5% non-productive features and areas on arable land where no pesticides and fertilizers are used” However footnote 6 adds: Using existing flexibility of Regulation (EU) No 1307/2013, Article 46. This article says: “Where the arable land of a holding covers more than 15 hectares, the farmer shall ensure that, from 1 January 2015, an area corresponding to at least 5 % of the arable land of the holding that the farmer declared in {….}, if they are considered to be ecological focus area by the Member State in accordance with paragraph 2 of this Article, including the areas mentioned in points (c), (d), (g) and (h) of that paragraph is ecological focus area.”

This leaves an ambiguity as to whether this applies only to farmers over 15 ha. However other parts of article 46 are more positive – “The percentage shall be increased from 5 % to 7 % subject to a legislative act of the European Parliament and of the Council in accordance with Article 43(2) TFEU.”

This is not the end of the matter however. The Council of Ministers have also been meeting this week, and have come to a deal. This also reduces the environmental ambition of the CAP, in ways which we will report on later today.

The next step is for these two institutions to come together, with the Commission, to work out a compromise between their positions. Past history tells us that there could be still further dilution of environmental ambition when trialogue happens.

In all of this, the Commission’s flagship EGD is in tatters. Technically the Commission can now do two things – propose amendments in Trialogue, or withdraw the CAP proposal altogether, in light of heightened climate and biodiversity circumstances. While amendments may be in their thinking, in this most unusual of years, outright rejection would be a nuclear option.

More on this Story

As the negotiations start to come to a close, this article focuses on the remaining fair and green considerations. We shed light on the state of play in the CAP post 2022 inter-institutional negotiations, particularly in relation to those articles of the CAP Strategic Plan Regulation which are still open to political and technical discussions. So what’s the deal? […]

Despite the rhetoric, this CAP is less green than the last one. Here’s why. […]

Polish government’s controversial decision to shift 25% from Pillar 2 (including RDP) to Pillar 1 of the CAP, forgetting about rural development priorities. […]