In their proposed quest to improve food safety and availability, the Romanian government changed the law regarding land purchase and sale last April. They modeled this on the unique French system of SAFER (Land Development and Rural Establishment Companies). SAFER is a non-profit agency under the control of the French Ministries of Agriculture and the one on Finances which can buy and sell agricultural land. This model was seen as a success by many other countries. But it recently had to face criticism from the French Court of Auditors regarding, among others, lack of transparency and ethics in some deals and loss of its primary objectives. So this French model needs not only to be adapted to the Romanian context but also to be improved within itself. What traps should be avoided by Romania in order to make a good policy?

SAFER was created under the 1960 Agricultural Orientation Law. Back then, it was seen as of key importance to increase agricultural production and to develop industrial agriculture, in order to insure food security by providing a stable production at affordable prices. Its objectives were to help farmers settle but also to regroup the lands, enlarge the family farms to increase profit and give more transparency to the land market.

More than 50 years later, Romania is following France’s outdated policy and improves its public system to administrate the land market. The goals are quite similar to the ones that led to the creation of SAFER: consolidating agricultural land in order to increase farm dimensions and to establish economically viable farms. Even if Romania used SAFER as an example, the organization is different. SAFER is divided into regional authorities. If a farmer wants to sell his land, he can contact the regional SAFER who will give a fair price to the land. Advertising is made by SAFER through the town halls and on a website. Candidates for the purchase have to fill a written submission. A regional Technical Committee (composed by members of the Agriculture Chamber, the majority farmers union, banks and insurance companies, regional authorities and representatives of the State) examine all the projects based on multiple criterias; the local situation, SAFER’s missions, the skills of the candidate and the viability of the project. Then they give a recommendation to the Board of Directors who will make the decision.

SAFER also has a pre-emption right: it is always informed by the notaries when a plot of land is for sale. Even in cases where there is another candidate, the land is bought by SAFER if there is a need to protect the general interest, such as to maintain an agricultural land, protect the environment, or avoid speculative purchases. 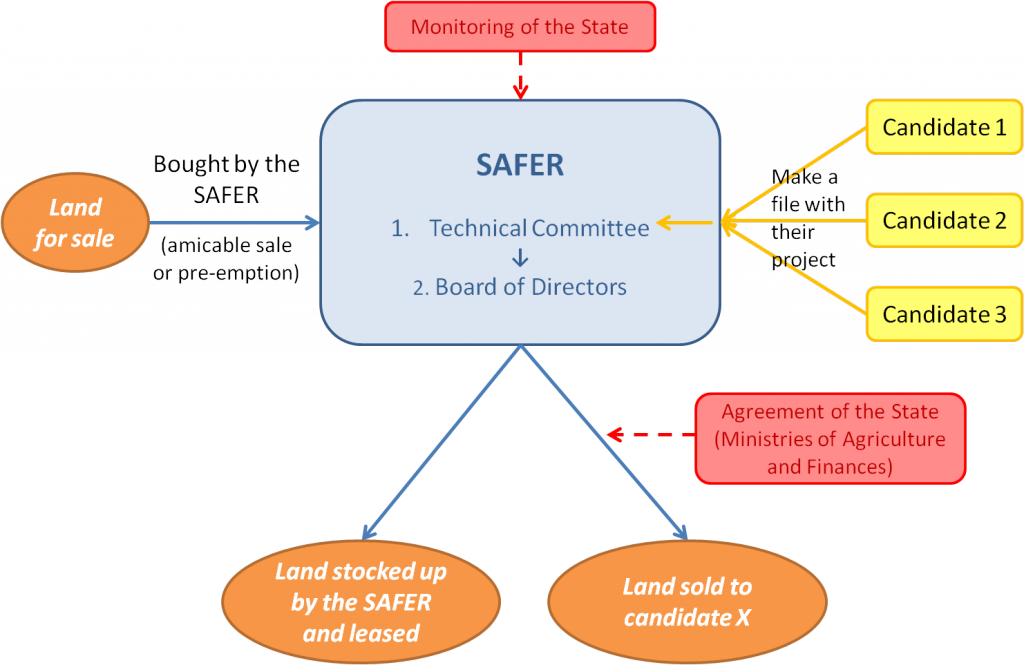 Unlike the French model, in Romania the management of agricultural land is distributed in three main structures: the town hall, the State Domains Agency (SDA) and the Ministry of Agriculture. Each farmer who wants to sell his land has to inform the town hall. The town hall is then in charge of the offers advertisement as well as the overseeing of the deal.

Since 2001, SDA is responsible for the administration of state lands. This agency is directly controlled by the Prime Minister, who names its president and vice-president. As part of its mission, SDA can acquire new lands considered strategic for consolidating agricultural lands. Those purchases are made easier by the new law that gives to the SDA the right of pre-emption for each sale of land. Once the land is acquired by SDA, it can only be leased. So its main work is to find tenants. For this purpose, it organizes public bid and fixes a minimal lease price. Those who plan to rent a larger amount of land, or those who offer a higher price will be selected.

Finally, the Romanian Ministry of Agriculture is responsible for checking the pre-emptive rights and legal status of sales. It is also responsible for applying penalties in case of violation of the law. However, it also manages a database on agricultural land to better know this market (like SAFER). 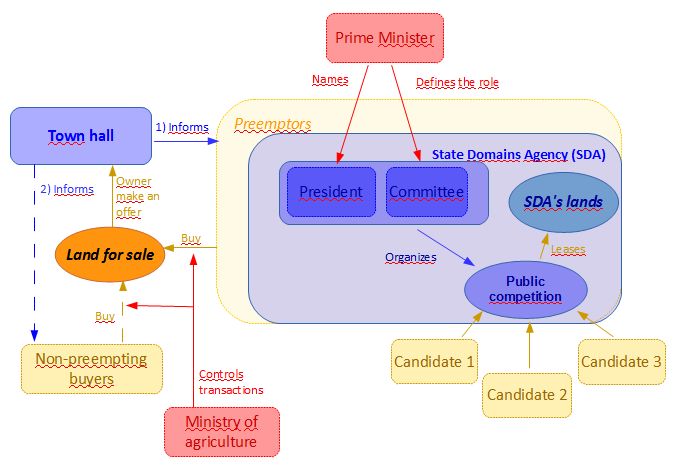 SAFER represents 23% of the land deals in France. Yet, is this system perfect? A recent report from the French Court of Auditors blames SAFER for not following its objectives: there are less settlements of farmers (only 1/3 of the deals), and more and more deals with rural buildings instead of agricultural buildings and lands. SAFER is also accused of including in the Technical Committee only the majority farmers union, whilst excluding other farmers unions.

The Romanian law 17/2014 was adopted last April but some parts still need to be clarified, especially the role of the controversial SDA: will it be allowed to sell land in the future? How will the pre-emption right be controlled?

In order to support a more sustainable and diversified family agriculture, the government should improve its infrastructure by using tools developed by SAFER and adapting them to suit Romania’s own social and agricultural needs. For instance, while the new law gives more power to the SDA through the pre-emptive right, it should also define more criteria for the lands tenant selection. Examples of this include: prioritizing young farmers and choosing sustainable projects in cohesion with local, sustainable rural development schemes.

Similarly, the Commission selecting tenants for SDA’s land should include representatives of rural areas, such as members of agricultural unions and environmental NGOs. But this point is trickier to implement. Romanian farmers unions are not so popular among farmers. Indeed, many of them are still suspicious about those organizations, because the unions are often direct descendants of the former communist regime. First and foremost though, the full diversity of Romanian farmers need to be represented in the decision-making process. Until this happens, it is all too likely that smaller farmers will be forgotten under the SDA’s new management plans, and pushed ever further towards the fringe of the land market.

Our dedicated section on Land Grabbing