ARC2020 is organising a 10 day EU-wide Speakers’ Tour on land grabbing in Romania. It will take place from 21-30 April 2013. Mr Attila Szocs who monitors large scale agricultural land purchases in Romania, and Mr Dan Cismas a biodynamic farmer and co-president of the EcoRuralis peasant association, will tour European capitals and cities to highlight, debate and raise public awareness on the social, environmental and economic impact of large scale land acquisition by both, foreign and national companies.

Find out more about the tour here

Over 4 million small-scale farmers own farmland of an average size of 2 hectares of arable land and 3 hectares in total. Most of these small-holdings were formed in the early 1990s during the first phases of post-communist transition when there was an increase in the number of small farms following the privatisation of former state agricultural enterprises and the restitution of land to the original owners. Since this coincided with a marked decline in industrial output and the release of many workers from industrial enterprises in the rural areas, a large number of unemployed people were readily absorbed into subsistence agriculture.

Current legal provisions in landownership stipulate that only Romanian citizens or companies registered in Romania can purchase land.

Despite these stipulations, figures released by Romania’s ministry for agriculture in November 2011 showed that multi-national companies own 800,000 hectares of agricultural area in Romania. This figure represents 6% of the country’s arable land surface. Capturing lucrative EU subsidies under the Common Agricultural Policy (CAP) appears to be a major driver of many of these grabs. This is leading to growing land concentration, as half of the subsidies received in 2012 went to just 1% of the farmers, all of whom had holdings above 500 hectares.

Investment funds and companies controlling agricultural land in Romania are i.e. Germany’s Nordcapital, Aquila Capital, Agrarius and Agroyield; KTG Agrar AG manages lands owned by foreigners in Romania. Germanagrar is one of Europe’s biggest players in agricultural and farming investments with a focus on Eastern Europe; including Romania. Other players are First Farms, Ingleby and Jantzen Development from Denmark, Finnish Tornator and Austria’s Cascade Empire. Two of the largest farmland owners in Romania, Maria Trading and Delta-Rom Agriculture, are multinational companies registered in Romania. 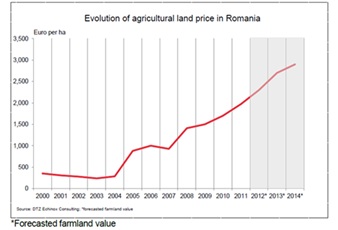 As a result of increased demand for agricultural land, average prices have been on a steady increase in Romania since 2004.

As of 1st January 2014 Romania’s legal provisions on landownership will change. Due to conditions enclosed in its treaty of EU accession, Romania will have to liberalise its land market to open it to non-residents and those living in the EU. This date is also likely to see an increase in farm subsidy payments. This means that Romania’s agricultural land prices are likely to increase further.

It is vital that people in Europe learn more about an issue which is taking place on our own doorsteps. Organisations and farmers across Europe are working hard to raise awareness and find out more about the facts and figures behind the debate. The tour coincides with the  launch of a new study by Hands Off the Land and the European Coordination of Via Campesina (ECVC) showing that the scale of land grabbing in Europe is greatly overlooked.

Come and join us in central Paris next week…at a farm!

Some wild species are returning once again. But what does this mean around the Continent? […]

Does peasantry pay the price for a more European Turkey?

By Asutay Meriç, Agrobiodiversity Campaign Intern at Eco Ruralis Following a contentious and  controversial election in Turkey politicians seem to continuously highlight that Turkey is Europe’s first and the World’s 7th largest agricultural producer. Roughly 80% of the hazelnut production, and most  of the fruit and veg that is exported into the EU comes from Turkey. These figures sound impressive. However, for the last decade Turkish peasantry which holds nearly two-thirds of the Turkish farms has been the poorest segment of the society. Their political, economical and cultural rights are constantly violated by the ruling Government itself. According to the Turkish National Institute of Statistics (TNIS) (pdf), agriculture makes up 8,4% of the national income and 25 % of the employment. Its 38.6 million hectares of utilized agricultural land has a segmented structure where an average plot size has around 5 hectares. Turkey, an EU candidate country for more than 15 years, has a very large utilized agricultural areas compared to other European countries. Having such a strong rural base, the country has always been […]