One of the highlights of this year’s Oxford Real Farming Conference (#ORFC2016) was the launch of a rural manifesto by the Landworkers Alliance and Land Magazine. Called Equality in the Countryside: a rural manifesto for the parliamentary opposition, the manifesto was launched  on Wednesday 6th January in the Old Library of Oxford Town Hall.

It includes 46 action points, on matters such a housing, land ownership, agriculture and rural employment. These all have the common aim of making Britain’s rural land and resources more accessible to a wider constituency of people. “

The manifesto makes clear the chasm between the wealthy and the poor, especially in the rural setting.

The  British  countryside,  and  more  particularly  lowland England,   is   enjoying   unparalled   prosperity.   Newly-thatched  cottages,  gleaming    Range  Rovers,   300  horse power  tractors,  and  rolling  seas  of  subsidised  wheat  and barley testify that the countryside harbours a great deal of wealth. However this opulence is not shared by everyone who lives there; it masks an obstinate persistence  of age-old  inequalities,  and  a  significant  level  of  what  is  now termed “hidden poverty”.

Impressive in scope, the manifesto considering historical causes, including the Corn Law repeals of 1840, the unfairness of CAP subsidy payments, while also offering lots of very practical solutions to current realities.

The  root  cause  of  the  gap  between  urban  and  rural wages  lies  in  the  fact  that  the  rural  economy,  reliant  on the  dispersed  production  of  primary  commodities,    is vulnerable  to  competition  from  global  markets  and  to aggressive price bargaining from cartels of processors and distributors  (supermarkets)  —  whereas  large  sections  of the urban service economy are immune from these forces. This explains why less than ten per cent of earnings from the UK food industry go to UK farmers and fishermen.

Controversial Guardian columnist George Monbiot emphasised the land and equity point, reminding attendees that the UK was one of the only parts of Europe not to have significant land reform.

A key class distinction the Manifesto spotlighted is the residents vs workers wealth gap. Whereas rural residents earn £90 more on average than urban residents, rural workers earn £90 less. This was in fact one of the most tweeted tidbits from the conference.

Indeed the conference hashtag #ORFC2016 rather incredibly, for what is ostensibly an alternative take on agri-food and the rural issues, trended on twitter. 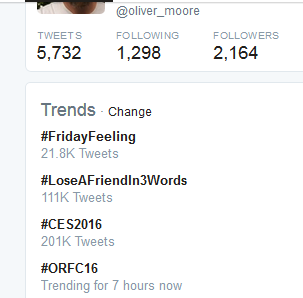 This former alternative now, it seems, is gaining a higher profile than the other longer running, mainstream Oxford Farming conference. Perhaps the same will soon be said for WirHabenEsSatt (We Are Fed Up) in Berlin January 16th, coming as it does just before Greenweek.

The alternative is becoming mainstream, as farm incomes plummet and public goods fail to get delivered by the CAP.

Organic and small-scale: An alternative vision for the future of farming (2016 review of #ORFC2016)

The European Commission continues to describe the Common Agricultural Policy as “ambitious”, yet its own evaluation of the CAP’s impact reveals that the farm subsidy scheme is inflicting massive damage on Europe’s biodiversity, water resources and nature. In this in-depth feature, Célia Nyssens of the European Environmental Bureau (EEB) explains why the CAP is not fit for purpose and outlines how it can be reformed. […]

After a summer break, we return to our re:CAP series to talk young and new farmers. We speak to Christian Rehmer (BUND – Friends of the Earth Germany), Aurélie Catallo (Pour Une Autre PAC), Ulrich Jaspers (AbL and Die Verbände-Plattform), and Ariel Brunner and Harriet Bradley (BirdLife). […]