Is the way we farm animals and turn them into food part of the problem or the solution to the myriad of social and environmental issues we face today? This is the core question we will address here in a new livestock debate series here on ARC2020.

As part of ARC2020’s 2016 focus, we’ll be hosting some debates on key issues for the agri-food and rural actor communities. Livestock is number one.

The impetus for this debate has been the emergence of the what could be called the livestock soil regeneration movement. It has long being argued and assumed  by many that livestock in general and meat in particular meat is unsustainable: that they contribute excessively poor diets, much environmental damage and, especially, climate change.

So while there are plenty of issues worth addressing many argue that dietary change encompassing less meat – or perhaps no meat or even animal products –  is essential for the planet’s socio-environmental well-being (see “more information” section below for some of these from 2014-2016).

In recent years however, an alternative view has emerged, one that considers the carbon building role – or, potential –  of livestock in soil, while also looking more broadly at agri-food and dietary sustainability. This position does not necessarily promote the current industrial agri-food system and its use of animals as sustainable, but does promote ways in which livestock could be – and in some cases is –  more sustainable in various parts of the world. Sustainable perhaps in the broader environmental, economic, social and political sense, but nonetheless regenerative.

Both strands are represented in numerous ARC2020 articles in recent times:

The Business of Pigs: Der Spiegel interview with Jochen Fritz (2013)

Agroforestry – saving the world with meat and sport (2015)

In this debate series, we’ll feature a host of experts from both sides of the Atlantic who make their cases for how they see livestock.

And very knowledgeable but and also quite different  individuals Frank Armstrong and Sheldon Frith.

We will also take contributions from readers, and will be active on social media about this. We’re especially looking forward to hearing from food producers. Do get involved via comments (including below) and on social media. Or contact us directly.

Finally, on a personal level I have to say I’m really looking forward to this debate. I’m a former vegetarian of 16 years, but I’ve also worked with livestock hill farmers who have exclusively outdoor and grass fed animals with zero winter feed iuputs *. My own PhD background is in agri-food and rural sociology, so I’ve been thinking about this for a long time. However I’m genuinely undecided on this issue!

Currently, I’m in the ‘less but better meat’ camp, but am I being delusional? Is  this a waste of valuable nature space compared to a hyper-efficient animal factory farm capturing and using gases? Or, compared to a completely plant-based diet?

Its really interesting being open to suggestion, rather than, as so often happens on the internet, looking for the data that backs up your own case. So enjoy – engage – argue respectfully – and join in!

We hosted a very popular livestock, meat and climate change debate in 2014 – one of our top ten most read articles in fact, since we started in 2010, was the first of these articles. 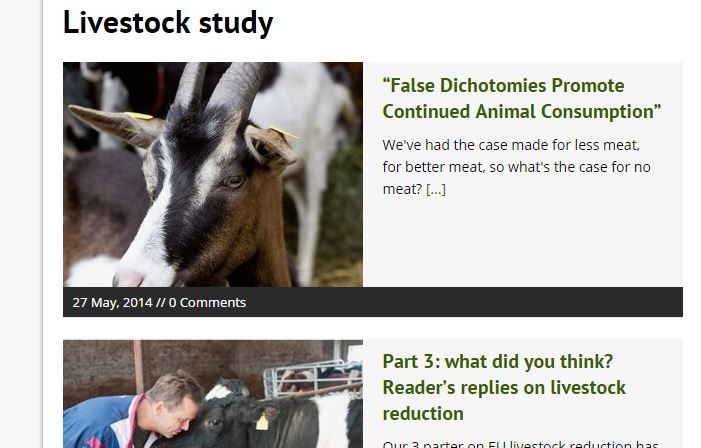 This debate started out with research which linked a reduction in livestock numbers with a reduction in GHG emissions; we then interviewed the authors, followed up with readers’ replies and finally had another perspective from writer Frank Armstrong. Check it out here!

Warning: your festive meal could be more damaging than a long-haul flight (Dec 2015)

Further Attention to the Environmental Implications of Dietary Choices (Jan 2016 – the author of the infamous ‘lettuce vs bacon’ paper!)

Is Eating Lettuce Really Worse For The Environment Than Eating Bacon? (Dec 2015)

*excluding that required by law via the suckler cow welfare scheme in Ireland, whereby cows having just given birth receive some supplementary feed to build themselves back up. In this case the feed had to be certified organic and was only for the period required. No indoor housing with either silage/hay or pellet feeds  such as soya, rolled cereals etc occurred.

3 Neonicotinoids Banned from Outdoor Use in EU

3 neonicotinoids – Bayer’s imidacloprid and clothianidin, and Syngenta’s thiamethoxam – will be banned from all outdoor fields on EU farms within six months. […]

What happened to the Sustainable Food Communication?

The Sustainable Food Communication will not see the light of day before Janez Potočnik steps down. […]