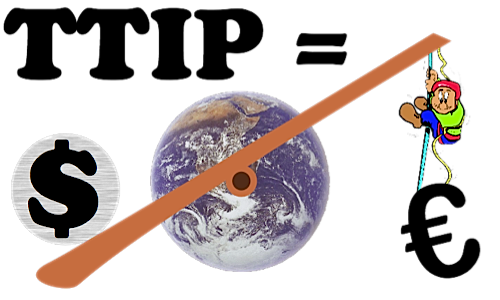 Last November, the Economics Research Service (ERS) unit of the US Department  of Agriculture (USDA) published economic models that beef up the USDA’s case for TTIP. For months, there have been many informal guesses as to what the impact of TTIP might be on food production: now there is an official version.

This latest offering is better-suited to providing ammunition for future Investor State Dispute Settlement (ISDS) hearings than casting any light on likely trade patterns in coming years. Unlike previous claims for TTIP’s trade impact, the authors have identified agricultural sectors within the study, as this passage from the introduction makes clear.

“This study uses an agriculture-focused, multicountry, computable general equilibrium (CGE) model to examine the effect of market access and NTM (Non Tariff Measure) reforms from TTIP. A particular focus is placed on the role of NTMs, which are explicitly modeled across specific agricultural commodities.”

Using economic and production data from a single year, possible growth in trade is projected as ratios over an unspecified time span. From a commercial point of view, such forecasts would be regarded as fanciful, but for political purposes it brought 2015 to a close with a sharper focus for negotiations, especially NTMs. The Economic Research Report ERR 198 was published in good time for the north American Thanksgiving holiday. Yet there is very little to celebrate on the European side of the table. 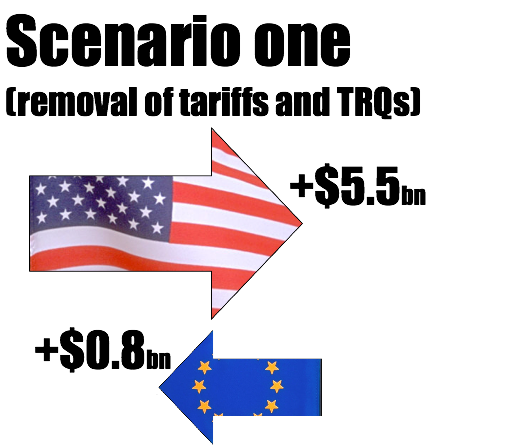 The first ERR scenario assumes that TTIP will remove all tariffs and Tariff-Related Quotas (TRQs). Without setting a time frame for the change, the ERS team calculates that TTIP changes would generate an additional 5.5 billion US dollars’ worth of export  sales in agricultural goods (including beverages and  tobacco, which in other contexts would be stripped out of the dataset). The corresponding gain for EU food exporters to the US would be 0.8 billion US dollars.

The second scenario assumes the same level of tariff-related market access and adds a number of  controversial Non-Trade Measures (NTMs) to the economic model, including beef reared with hormones, biotech [=GM] crops and “the use of pathogen-reduction treatments” on poultry and beef. The result roughly doubles the predicted gains in export sales on both sides of the Atlantic, with the same  significant advantage being claimed for US agricultural exporters. 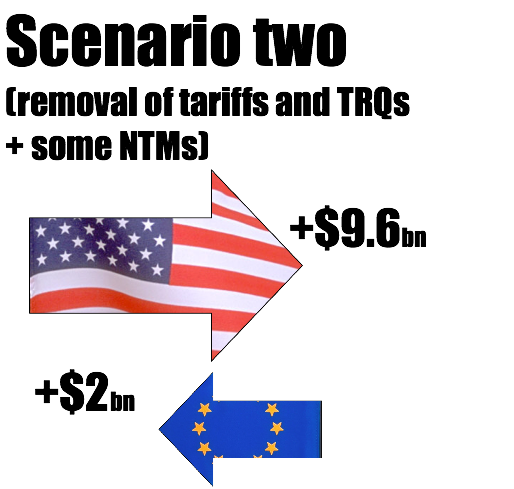 In some sectors, the predicted step change is dramatic. The first scenario suggests that US chlorine-washed poultrymeat exports would nearly double their sales to the EU, adding a further 97% over an unspecified time period. Yet removing the NTMs in the second scenario would magically boost  US poultry sales by thirty three thousand, five hundred and five point one six percent (33,505.16%)(sic). When a calculation generates a predicted five-figure result, retaining two decimal places is irrelevant and absurd. The exercise of forecasting sales gains on this scale only makes sense in the context of supporting an ISDS claim for US poultrymeat exporters in a few years’ time.

There is a third scenario, which takes into account “demand sensitivity.” In the case of poultrymeat it means that economists recognise that there is a certain hesitancy on the part of European consumers to buy chicken from abattoir lines that kill hundreds of birds a minute and every year manage to contaminate millions  of chicken carcases with their own faeces because the lines run too fast to operate cleanly. However, assuming that incremental sales will turn up for US poultrymeat, ERS predicts that exporters could see a sales lift of 841.66% for faecally-contaminated chicken in the EU. There would be grounds for supposing that such meat would find its way into ready meals rather than retail packs of raw chicken pieces, which would be subject to spot checks by trading standards inspectors, where these are still carried out.

The ERS economists used 2011 data to build and run this series of economic models. Each one presents the data in such a way as to make compelling statistical arguments for the negotiating team. Compelling, that is, until anyone starts asking questions or looking more closely at the results.

[1] Agriculture in the Transatlantic Trade and Investment Partnership: Tariffs, Tariff-Rate Quotas, and Non-Tariff Measures is the title of the Economic Research Report number 198. Summaries, diagrams and the full report can be downloaded.

There is further discussion of NTMs in Economic Research Report number 199.

All ARC2020 articles on TTIP

All you ever wanted to know about TTIP…

Arc2020 has this week updated our briefing notes on TTIP. This means you can be fully informed with all of the major aspects, controversies and issues related to the Transatlantic Trade and Investment Partnership, especially from an agri-food perspective. We explain the background – the spin about jobs and growth, in essence, and then begin to unpack all the main problems we see with this corporate power grab. These notes feature the work and publication of key organisations on both sides of the Atlantic including Friends of the Earth Europe, the Institute of Agriculture and Trade Policy, Corporate Europe Observatory. We unpack the threat of lowered standards and regulations; corporate influence on negotiations especially ‘investor-state dispute settlement’ (ISDS) and similar regulatory chill developments; the relationship between bad diets and trade deals; lack of transparency, and also the good news – the fact that we are making progress. Here are some of the highlights you will find if you pop over to the briefing notes page: Poland had to pay E2 Billion in an ISDS settlement trying […]

Over 400 activist groups met, demonstrated and marched in 22 countries across Europe on Saturday, October 11 against TTIP […]