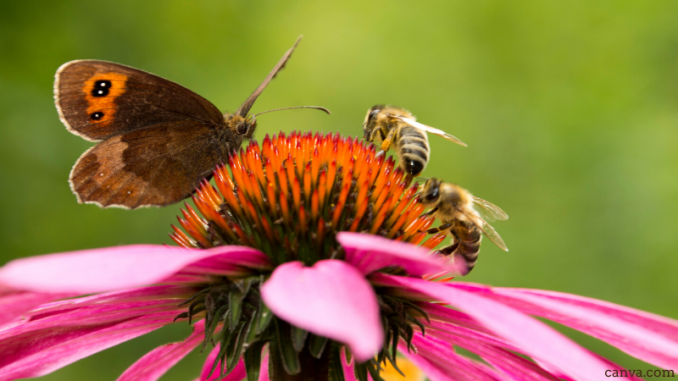 Pollinators secure our food supply, but Europe’s wild pollinators are being wiped out by intensive agriculture and the use of pesticides and fertilisers. In the latest in a series of damning reports, the European Court of Auditors accuses the Commission of failing ailing pollinator populations. Louise Kelleher reports.

You have to hand it to the European Court of Auditors (ECA): it’s coming down hard on biodiversity loss. Of the 15 special reports published so far this year, this is the third to sound the alarm on the EU’s failure to rescue plummeting insect populations.

Having previously slammed the Commission for having a poor handle on pesticide use and for failing to safeguard farmland biodiversity, the auditors are back to attack the EU’s hit-and-miss approach to wild pollinators.

The Commission has underused the tools available in CAP and in biodiversity conservation measures, say the auditors. The EU biodiversity strategy to 2020 has no specific actions to rescue declining populations.

The 2018 Pollinators Initiative is a step in the right direction, but ultimately it fails to fill the policy gaps it is meant to address due to a lack of governance and control mechanisms.

No safeguards in CAP… for now

Because intensive agriculture is a driver of pollinators’ decline, CAP largely holds sway over the diversity of nature in Europe’s landscapes. Yet while it purports to protect biodiversity through cross-compliance, greening and agri-environment-climate measures, CAP contains no specific legal provisions to protect wild pollinators.

Indeed, a related report by the ECA only last month found that CAP spending on farmland biodiversity has been largely a waste of money.

So how did the CAP measures designed to protect biodiversity fare under the glare of the auditors?

Ecological Focus Areas (EFAs) have the greatest potential to provide food resources and nesting ground for wild pollinators, the auditors found. As of 2018, pollinators are specifically catered for in two new EFA types: land lying fallow for melliferous plants (pollen and nectar rich plants) and the cup plant (Silphium perfoliatum).

But EFAs are hit-and-miss when it comes to benefitting wild pollinators. This is because Member States are free to cherry pick their EFA types – along with the management requirements and conditions they impose. In 2018, the most popular choices were catch and cover crops, nitrogen-fixing crops and land lying fallow, which together accounted for 96% of EFAs.

These EFA types yield mixed outcomes for wild pollinator populations due to variations in location, cutting and harvesting dates, and pesticide use.

For instance any benefits for pollinators are negated if catch, cover or nitrogen-fixing crops are cut before or during flowering (as happens in the majority of cases).

Land lying fallow meanwhile is only beneficial to pollinators if sown with wildflowers – not if soil is left bare. Yet the Commission does not dictate how land lying fallow should be managed, and Member States don’t provide information on how farmers are managing this type of EFA.

Meanwhile pesticide use is permitted in certain EFA types such as field margins, buffer strips and other non-productive landscape features, note the auditors.

Agri-environment-climate measures (AECMs) also hold promise for the protection of wild pollinators. Especially beneficial are targeted AECMs such as maintaining existing semi-natural habitats and landscape features, or creating new habitats. However due to insufficient uptake by Member States and farmers, AECMs are not enough to bring back wild pollinator populations.

Conditionality in the new CAP

Under the post-2020 CAP conditionality (which is to replace current greening and cross-compliance requirements) will include voluntary eco-schemes to be defined at Member State level.

However the Commission’s stated objectives for the eco-schemes do not include the protection of pollinators or pollination services. In practice this means that when Member States draw up their CAP strategic plans, there is no guarantee that the eco-schemes will specifically benefit wild pollinators.

EU rules are supposed to safeguard honey bees from nefarious plant protection products (PPPs). However the risk assessment procedure for these PPPs is not up to speed with now more stringent legal requirements. What’s more an appropriate risk assessment scheme should incorporate specific protection goals according to EFSA.

Other pollinators however don’t enjoy the same protections from neonicotinoids.

Neonicotinoids are known to be harmful to insects, but emergency authorisations are allowed under the PPP directive. In 2017, note the auditors, emergency authorisations for PPPs containing imidacloprid, thiamethoxam and clothianidin, which had been issued by Bulgaria, Hungary, Lithuania and Romania, were found to be unjustified. The EFSA concluded that in all four countries chemical or non-chemical alternatives were available (such as crop rotation or soil tillage).

Under EU rules chemical PPPs should only be used as a last resort. Farmers are required to apply Integrated Pest Management (IPM). But as noted in the ECA report on pesticides published earlier this year, the use of IPM has been poorly enforced.

The auditors acknowledge that the Commission has included two research projects focusing on alternative solutions to neonicotinoids in the Horizon 2020 work programme.

But as a Commission communication, the Initiative lacked the teeth of a legal framework or the specific financial resources to protect and restore Europe’s wild insect pollinator populations.

The Pollinators Initiative failed to influence key policies and measures, as the auditors illustrate with a couple of concrete examples:

The Pollinators Initiative also suffered from shortcomings in governance. Apart from a lack of clear roles and responsibilities, to date there have been no progress meetings. In any case progress is impossible to gauge since the Commission defined no monitoring and reporting arrangements, and set no targets or criteria to assess whether the actions achieved their objectives.

Auditors’ Recommendations for the Commission

Assess the need for specific measures to protect wild pollinators

(a) assess whether to address threats currently not considered in the Pollinators Initiative in the follow-up actions and measures for the EU biodiversity strategy to 2030;

(b) set up appropriate governance and monitoring mechanisms for these actions and measures, including assigning clear responsibilities between Commission departments involved in policy areas relevant for wild pollinators.

(a) for Natura 2000 sites, make sure that requirements for the protection of wild pollinators are included in the Prioritised Action Frameworks (PAFs), and assess the relevant measures proposed by the Member States in the PAFs;

(b) assess the positive or negative effects on wild pollinators of management practices in the 2014-2020 CAP;

(c) for CAP Strategic Plans, make sure that Member States include, whenever necessary, management practices which have a significant and positive effect on wild pollinators in conditionality, eco-schemes and rural development agri-environment-climate measures.

(a) propose to amend or create implementing PPP regulations to:

(i) include safeguards for a representative range of wild pollinator species which are comparable to those for honey bees, and

(ii) require that Member States justify emergency authorisations, and give details of their search for alternative solutions.

(b) prepare, together with Member States, a work plan for the development of test methods focusing on wild pollinators, and the definition of specific protection goals for wild pollinators.

This audit has been timed to complement last month’s report on farmland biodiversity, which is also intended to feed into the new EU biodiversity strategy to 2030. As the ECA itself boasts, it has a pretty good track record of getting its recommendations adopted. Can this timely onslaught of audits throw a lifeline to Europe’s ailing pollinator populations? Will the CAP strategic plans allow more breathing space for biodiversity in EU agriculture? And will the “Green Deal” Commission make the most of this decisive moment?

More on CAP and Biodiversity

End of milk quotas: how will eastern Europe cope?

By Laetitia Nourry, Eco Ruralis intern on Food Chains Campaign 30 years after its setting up, the milk quota system is coming to its end. Europe is returning to unlimited production of milk where the benefits go to industrial farming. Another stab for the slowly disappearing peasant farmer. Milk quotas were set up in 1984 by the Common Agricultural Policy, to regulate the supply and demand and avoid prices collapse. So why lift them now? The reason is for economic. As milk consumption is increasing, especially in Asia (the demand of milk should double by 2022), the European Union definitely wants to keep its first place as milk exporter to the world. To reach this goal, one solution proposed by the EU leaders says that “farmers should be more aware of the market signal“. In other words, produce more milk, again and again, at the cheapest price. Hyper-production, exports, economic growth…but what is the price ? The end of quotas will indeed enrich big producers. Industrial farms will be able to produce milk in impressive […]