My name is Kieran Sullivan and I farm sheep and forestry part-time with my brother in the south-east of Ireland. The ground is heavy and we have a relatively low stocking rate of seven ewes per hectare, spread over six hectares, meaning our flock comprises 40 mature ewes.

Suffice to say we are a small lamb production enterprise and our target market thus far has been the local village butcher. This is the first point to note – we are part of the economy that supports rural employment.

My brother and I were born farmers. However, we moved away from it in 2002 and only returned in 2015. Both of us had been living in a nearby city but moved to the countryside again when we recommenced farming. This is the second point to note – farming allows us to live in a rural area, not in a city.

We have plans to develop different consumer foods based on our lamb, creating new routes to market and linking directly with consumers. Point number three – we are trying to close the gap between citizens and their food.

It almost goes without saying that we farm in a sustainable manner: trees and hedgerows are maintained, water courses are fenced off, artificial fertiliser is kept to a minimum. The fourth point – we are helping to look after the countryside and the environment.

So, where is this description of our farm going and what does it have to do with the CAP?

Each of the above four points can be seen as a ‘public good’, and very much aligned with the three overarching priorities for rural development policy in the second CAP pillar. We could reasonably expect CAP pillar-2 to support our efforts then?

Well, yes and no. As with any modern bureaucratic system, it’s complicated.

Ahead of the new CAP in 2020, all environmental measures from the current pillar-2 are closed in Ireland. So, no joy there.

Our forestry payments are fixed, and thankfully they are assured for another few years.

We didn’t qualify for the ‘transfer of knowledge’ scheme when it opened and though a ‘physical investment’ scheme remains available, there is a minimum investment of €2,000 required. Given the scale of our enterprise at the moment, we are not in a position to spend the price of twenty finished lambs on fencing or additional handling equipment.

The ‘sheep welfare scheme’ is most welcome and even though it is only €10 per ewe, and we had only 26 ewes in the reference years, it certainly helps with costs.

We started looking at the local LEADER programme and that may prove to be fruitful, but it is early yet. And its very bureaucratic.

Overall, it is safest to say pillar-2 is a mixed bag – at best.

What about pillar-1 of CAP then? From our point-of-view, it seems mostly concerned with direct payments and providing income support for farmers. Without historic ‘entitlements’ or other legacy payments, pillar-1 does nothing for us.

So, who does actually benefit from the current implementation of multi-billion Euro CAP budget? The consumer perhaps? Well, not quite. They get cheap food but it is increasingly supplied by large multinationals who can afford to pay retailers for shelf-space to sell their heavily processed products (high salt, high sugar). Retailers themselves benefit, as do food processors since both can squeeze farmers’ margins, safe in the knowledge that many farmers depend more on the “cheque in the post” (direct payments) than a decent payment for their produce.

In a nutshell, these are the people gaining from CAP in its current form: retailers, processors, and farmers with large enough direct payments to remain in business. While each of these groups are part of the food supply chain, it is unlikely they are the sole beneficiaries envisioned in Europe’s CAP. They now have vested interests in maintaining CAP’s current format and will no doubt work hard to resist any changes post-2020. Their professional lobbyists at regional, national and European level are already laying the ground work to preserve the status quo.

The distance between policy-makers in Brussels and those of us who wear muddy boots has never seemed greater.

This is what CAP looks like for many at the front-line of primary food production: it’s a nice idea but favours those who have the most muscle. Having said that, the winners outlined above in the current CAP must also be winners in the new CAP – the supply chain will not function without them. However, new thinking is required and consideration must be given to current farming landscape. Despite decades of so-called structural change and the apparent demise of the small farmer, we continue to exist and play a vital role not just in agriculture but across the entire rural landscape of Europe.

In his book, Fast Food Nation, author Eric Schlosser outlines the destruction wrought on society by the fast food chains and their upending of the whole agriculture supply chain to suit their own needs. Nonetheless, he concludes by saying the fast food multinationals are not simply the bad guys. They just want to make money – if consumers demanded salads and fruit instead of burgers and fries, then that’s what they would sell.

The same goes for European citizens. If we demand healthy food, produced to high standards, then the vested interests named above would sell it to us. For this to happen, citizens must first understand the importance of nutrition. Educating adults and children alike on what comprises a healthy diet is a prerequisite for a healthy society.

Rather than simply supporting agriculture production, our small, part-time farm family would like to see the new CAP take on an education and awareness role. Only an informed citizen can lead to the long-term viability of European agriculture and rural development. Whether via two pillars or otherwise, such an approach would ensure lots of ‘public goods’ for us farmers and us citizens alike. 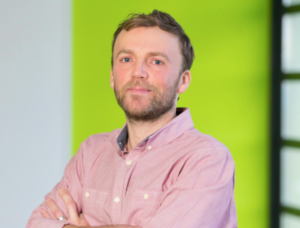 Kieran Sullivan is a part-time sheep farmer in south-east Ireland. He and brother Tony manage a mid-season lambing flock in addition to 13 hectares of forestry on the family farm. Kieran works off-farm on IT research projects, covering subjects such as telecommunications and data analytics. He is a regular contributor to various agriculture-related publications, in addition to being a folk singer and guitar player.

About Kieran Sullivan 2 Articles
Kieran Sullivan is a part-time sheep farmer in south-east Ireland. He and brother Tony manage a mid-season lambing flock in addition to 13 hectares of forestry on the family farm. Kieran works off-farm on IT research projects, covering subjects such as telecommunications and data analytics. He is a regular contributor to various agriculture-related publications, in addition to being a folk singer and guitar player.

How was the first growing season for Chiara and her forest mushrooms? What worked and what didn’t work? And how sustainable – in ‘blue economy’ terms – is the whole thing anyway? […]

Why should farmers consider community, cooperative approaches? What are the benefits to doing so – and what happens when more individualistic approaches are taken instead? In the first of our occasional contributions from Patrick Worms, this testing topic is grappled with.  Patrick Worms trained as a molecular geneticist and is the Senior Science Policy Advisor of World Agroforestry (ICRAF) and the President of the European Agroforestry Federation. These rants however, are 100% Patrick’s own personal opinion, and are not necessarily the views of any of the organisations he works for or represents. […]

Understanding the Nature of Peace

Following terrorist attacks and retaliatory bombings, read Understanding the Nature of Peace. A joint article by Hannes Lorenzen (ARC2020) and Juliette Majot (IATP) which places these awful occurrences in a rural, farming and food context. […]