Non-government organisations on both sides of the Atlantic are restating their arguments against the Comprehensive Economic and Trade Agreement (CETA) between Canada and the European Union, which was signed on October 30. The race is on to prevent CETA from being ratified in the coming months. The first part of this two-part report from Paris reported the warnings given by the Council of Canadians. In this second part, we will cover wider transatlantic issues, which have been packaged as trade questions, despite in reality going far beyond their stated aims. 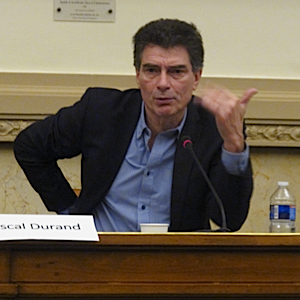 During the December 6 meeting at the Assemblée Nationale, in Paris, one speaker encapsulated the transatlantic agenda very neatly. Ecologist MEP Pascal Durand (right) spoke towards the end of the meeting, but his contribution is worth citing out of sequence. The previous speaker noted the lack of any independent assessment of CETA’s impact on European agriculture, to which Durand added: “…in the cases of CETA and TTIP, [their true impact] will never be discussed in any report from the European Commission.”

Why? “Because, quite simply, these treaties pose the question: ‘what kind of society do we want to live in?’ There is nothing else [of consequence to discuss]. It’s true, there will be interminable technical discussions, but the one question that needs to be answered is:  ‘which agricultural model do we want to keep?’”

There is more to the debate than giant corporations on one side and small businesses on the other, Durand explains. In the context of CETA or TTIP, the private interests of the big corporates can be served by endless transnational mergers and restructuring of businesses. Large scale agribusinesses on either side of the  Atlantic will constantly adapt and anticipate opportunities in the markets. “But if Europe abandons its vision of a social agriculture with environmental aspirations, it’s all over. La messe est dite. (The mass has been said.)”

US policymaking is taking a harder line

It would be easy to assume that all US law is decided in Washington, given that federal legislation is reported as a fait accompli but most state legislation goes unreported unless it is over-ruled by a federal diktat. As a former legislator in her home state of Maine, Sharon Treat (left) worked for decades to add a human dimension to state laws, chairing committees in Maine’s House of Representatives and Senate.

“Way back, I faced a choice between being a campaigner or a legislator. Developing good policy is very satisfying,” the IATP consultant told ARC2020  in Paris. There is a gentle wisdom to be found in her accounts of leading committees to make enlightened decisions of their own accord, delivered with a faintly subversive smile.

Since then, however, the US policymaking environment has polarised considerably, to Treat’s chagrin. “Before, people were prepared to compromise, but that’s a thing of the past.” The re-emergence of strong-arm public figures as political role models is sidelining the subtlety of policymaking and the experience that Sharon deployed so effectively during her legislative career.

Treat is a co-author of Selling Off The Farm: Corporate Meat’s Takeover through TTIP which was published jointly in July by the Institute for Agriculture and Trade Policy’s European office, along with international group Compassion in World Farming (CIWF), German member of Via Campesina—Arbeitsgemeinschaft bäuerliche Landwirtschaft e.V. (AbL) and PowerShift. In Paris, she was able to announce a French language executive summary, Élevage à Vendre, which can be downloaded from the Compassion In World Farming website .

Since November, the US presidential election result has redrawn the political map of the USA, but it leaves the underlying corporate agenda untouched. President-elect Trump may have dumped the idea of actively developing TTIP, but the ideas it would have implemented are still around. Having surrounded himself with agribusiness leaders and the lobbyists who successfully petitioned TTIP negotiators, Trump will be subjected to the same diet of partisan half-truths as his predecessor. The fact that he was very quiet about agriculture before the election is, in itself, a cause for concern, Treat believes.

She warns that Europe still needs to learn lessons from the impact of the North American Free Trade Agreement (NAFTA), if smaller operations and family farms are to survive intact. In the US, 90% of independently-owned pig farms have gone out of business in the past two decades as a result of NAFTA. With a single company accounting for half the total US pig production, the economies of scale would appear to be incontrovertible — until the day, that is, when the bacteria  on a 20,000 animal holding develops a resistance to the available antibiotics.

Livestock concentrations on this scale come with other environmental issues. US livestock generates 500 million tonnes of manure a year, with no effective water treatment requirements for feedlot operators. To put it in perspective, this is three times the total tonnage of human sewage treated in the USA every year.

With no effective regulations on greenhouse gas emissions either, intensive livestock operations have a free hand. It would be hard to find an industrial-scale US food producer who could honestly say that he or she was constrained by what president-elect Trump calls “burdensome” regulations.

The US Department of Agriculture (USDA) cannot even require meat processors to recall batches of contaminated or infected meat. US meat processors literally do not have time to integrate traceability of any description into their workflows. By US standards, however, European regulations are beyond “burdensome” and simply impossible to even contemplate. 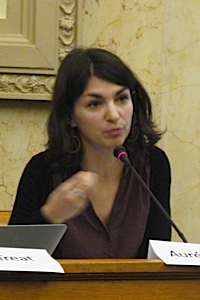 The process of transatlantic regulatory harmonisation would seek to set lowest common denominators rather than impose meaningful animal or public health standards. It may also explain why agricultural economist Aurélie Trouvé (left) has not yet seen an independent academic study for the agricultural implications of CETA.

She is currently working on a report for  the European Parliament that evaluates the risks of CETA to European agriculture. However, she notes that while the US government agencies have lined up their case for North American standards, the European Commission has yet to get its act together. “When it comes to CETA, we are being dragged by the nose and we need to catch up as best we can.”

CETA isn’t dead. As George Monbiot put it recently, when discussing the fade back of TTIP while CETA was being signed, the price of liberty after all, is eternal vigilance.

BREAKING (12/06/2015, 20.30 hrs): House Rejects Trade Bill, Rebuffing Obama’s Dramatic Appeal First comment from IATP: Following months of intense public opposition to Fast Track, the House of Representatives today defied the Obama administration’s trade promotion package. The debate over Fast Track blurred party lines. “It took real courage for those Democrats and Republicans who stood up to the President and Republican leadership and opposed the free trade package. They defended working families, farmers, natural resources, the environment and most importantly, democratic principles,” says Juliette Majot, President of the Institute for Agriculture and Trade Policy (IATP). “This is a clear rejection of the free trade agenda that favors big business over workers, farmers, consumers, and our environment. It’s time to bury this failed approach. I just hope the administration is really listening to what was said today, and what citizens groups around the world have been saying for years. We need very different rules that enhance local economies and jobs and advance efforts to rebuild our food system so it is fair and sustainable,” according […]

Non-government organisations on both sides of the Atlantic are restating their arguments against the Comprehensive Economic and Trade Agreement (CETA) between Canada and the European Union. In the first section of a two-part report from the Paris leg of a CETA and TTIP European Tour by experts, ARC2020 looks at the warnings given by the Council of Canadians. […]