“We need to come back down to earth in Europe. Agriculture is losing its farmers. The European model of small-scale farming is at risk. There is a gradual process of land concentration undermining small-scale farming, and consequently the future of a diverse and sustainable cultivation of our land. Farmers are increasingly losing the ground they are working on.” Maria Heubuch (MEP)

The above quote introduces the report  by ARC2020s Benedict Haerlin – Land Rush – The Sellout of Europe’s Farmland. Haerlin also facilitated the opening session of a major Conference in the European Economic and Social Committee and also the European Parliament on December 7th called “Access to land for farmers in the EU”.

The context is that all across Europe, land speculation and land concentration are an increasing threat to small and medium sized family farms and to people trying to get involved with farming.

As the Conference outline emphasised: “Soaring land prices make it increasingly difficult for farmers to have access to land. In the meantime, investors are buying up enormous pieces of land, sometimes using legal loopholes. Land is increasingly becoming a globally tradable commodity and an object of financial speculation. Examples such as Scotland and Andalusia, where arable land, pastures and forests are highly concentrated since centuries, show the negative effects for sustainable rural development and societies as a whole.” 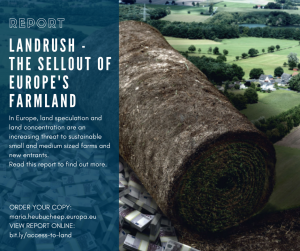 All ARC20020 articles on landgrabbing

About Oliver Moore 178 Articles
DR. Oliver Moore is the communications director and editor-in-chief with ARC2020. He has a PhD in the sociology of farming and food, where he specialised in organics and direct sales. He is published in the International Journal of Consumer Studies, International Journal of Agricultural Resources, Governance and Ecology and the Journal of Agriculture, Food Systems, and Community Development. A weekly columnist and contributor with Irish Examiner, he is a regular on Countrywide (Irish farm radio show on the national broadcaster RTE 1) and engages in other communications work around agri-food and rural issues, such as with the soil, permaculture, climate change adaptation and citizen science initiative Grow Observatory . He lectures part time in the Centre for Co-operative Studies UCC
Website Twitter

Written By: Stella Beghini, Agrobiodiversity Campaign Intern for Eco Ruralis  At the recent International Forum on Agroecology held in Mali, delegates of peasants and many other groups from all over the world strongly addressed the roots of the crisis concerning our natural and social systems. They claimed agroecology as the real solution to reach environmental justice. The challenges and opportunities of how agroecology can be achieved in Eastern Europe is essential to growing this international movement. The Nyéléni Center in the Malian village of Sélingué held its first Forum in 2007 where food sovereignty was first conceptualized as a holistic approach and vision to agrarian justice. Fast forward to 2015, another meeting of diverse and united groups of peasants, indigenous people, fisherman, agricultural workers and others was held to work on reaffirming agroecology as the solution to mend our broken food and social systems. The delegates pointed out the many challenges that peasants around the world are facing nowadays: the loss of control over natural resources, land and whole knowledge systems that are the basis of our traditions and […]

Introducing an advocacy tool against large land investments and their negative impacts on rural communities in Europe. […]

Lack of access to affordable land is one they key obstacles to new farming entrants. The sector is suffering from a seriously aging population which puts the future of European small-scale farming at risk. How can we encourage more young people to get into the profession when access to land is so tricky? Natasha Foote talks us through the problem and explores one exciting approach on the vineyards of Southern France. […]