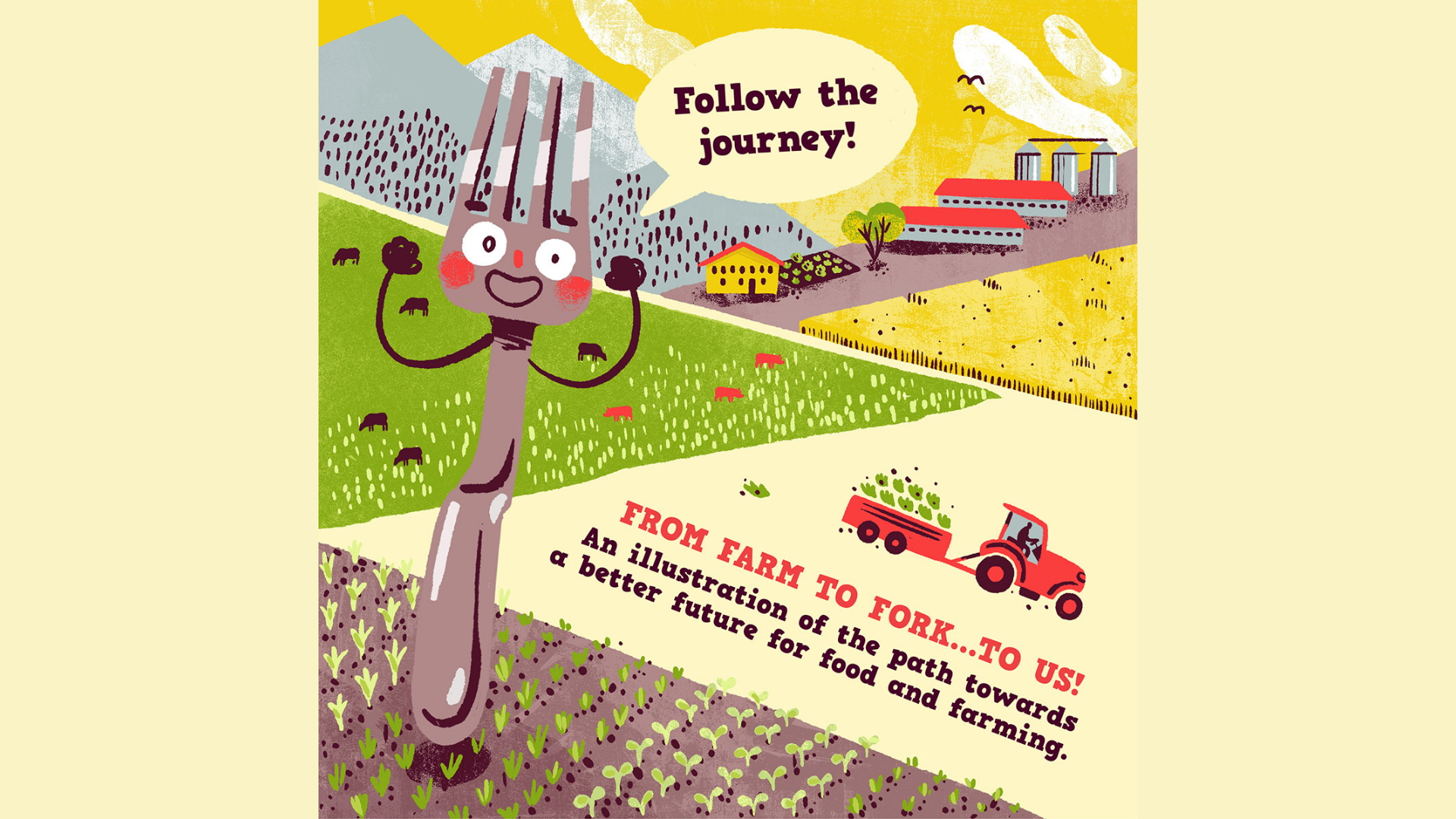 A year on from the launch of the EU Farm to Fork and Biodiversity Strategies, the Good Food Good Farming coalition is running an exciting social media campaign to raise citizens’ awareness of the problems of industrial agriculture and illustrate a path towards a better future for food and farming.

When it comes to pressuring legislators to act, citizen awareness is crucial. The targets and objectives of the European Green Deal’s Farm to Fork and Biodiversity Strategies, without implementation and follow-up, are little but lip service.

But the details of these strategies can appear far-removed or overly technical for many citizens. We may not always understand the complex problems associated with industrial agriculture – and how these issues affect us.

To get citizens up to speed, the Good Food Good Farming campaign breaks down some of the key issues, and presents the goals of the Green Deal as solutions.

In a trio of comics, Fork, the narrator, and his farmyard friends, take us through a farmland story which highlights key objectives of the EU Green Deal Strategies along the way.

Biodiversity and making space for nature 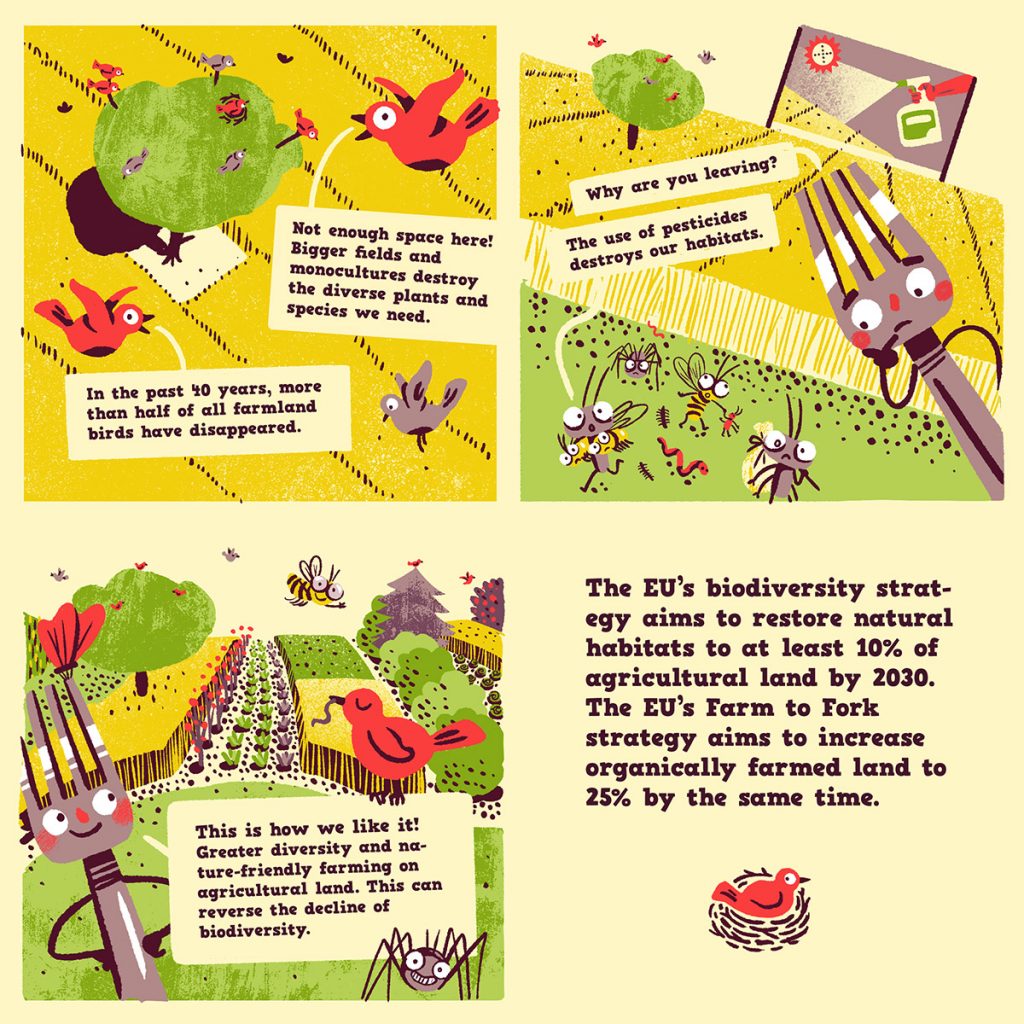 The first comic shows how habitats and their species are devastated by increased field size, monocultures and pesticide use. A possible solution? Greater diversity on agricultural land and nature-friendly farming. Here we are reminded of the EU Biodiversity Strategy’s objective of restoring natural habitats to at least 10% of agricultural land, and the Farm to For Strategy’s target for 25% organically farmed land by 2030. 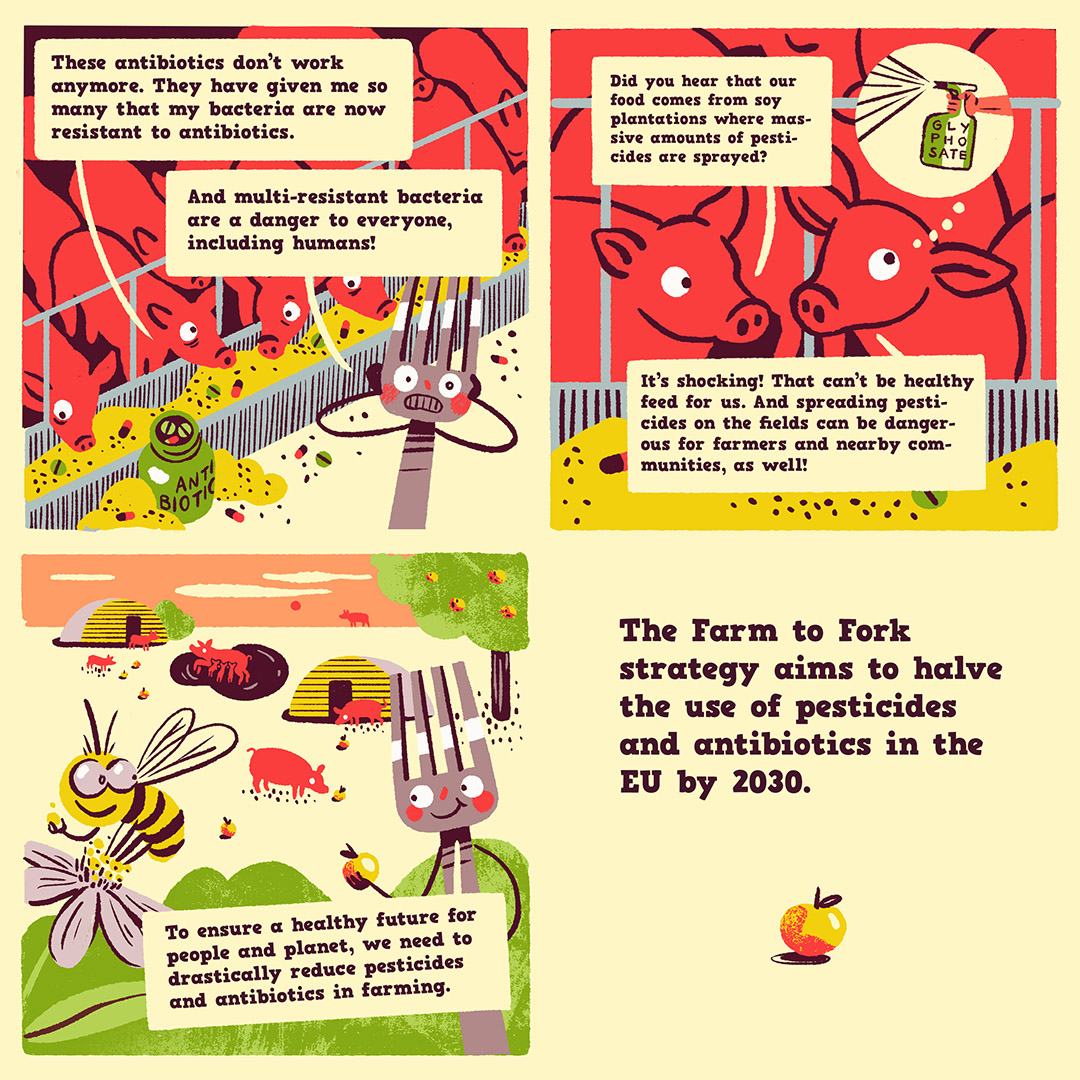 Next up is antibiotic resistance and the dangers of excessive pesticide-use. What progress is there on the Farm to Fork Strategy’s aim to halve pesticide and antibiotic use in the EU by 2030? The European Commission is to publish yearly reports on the progress at EU level towards the pesticide reduction objective. 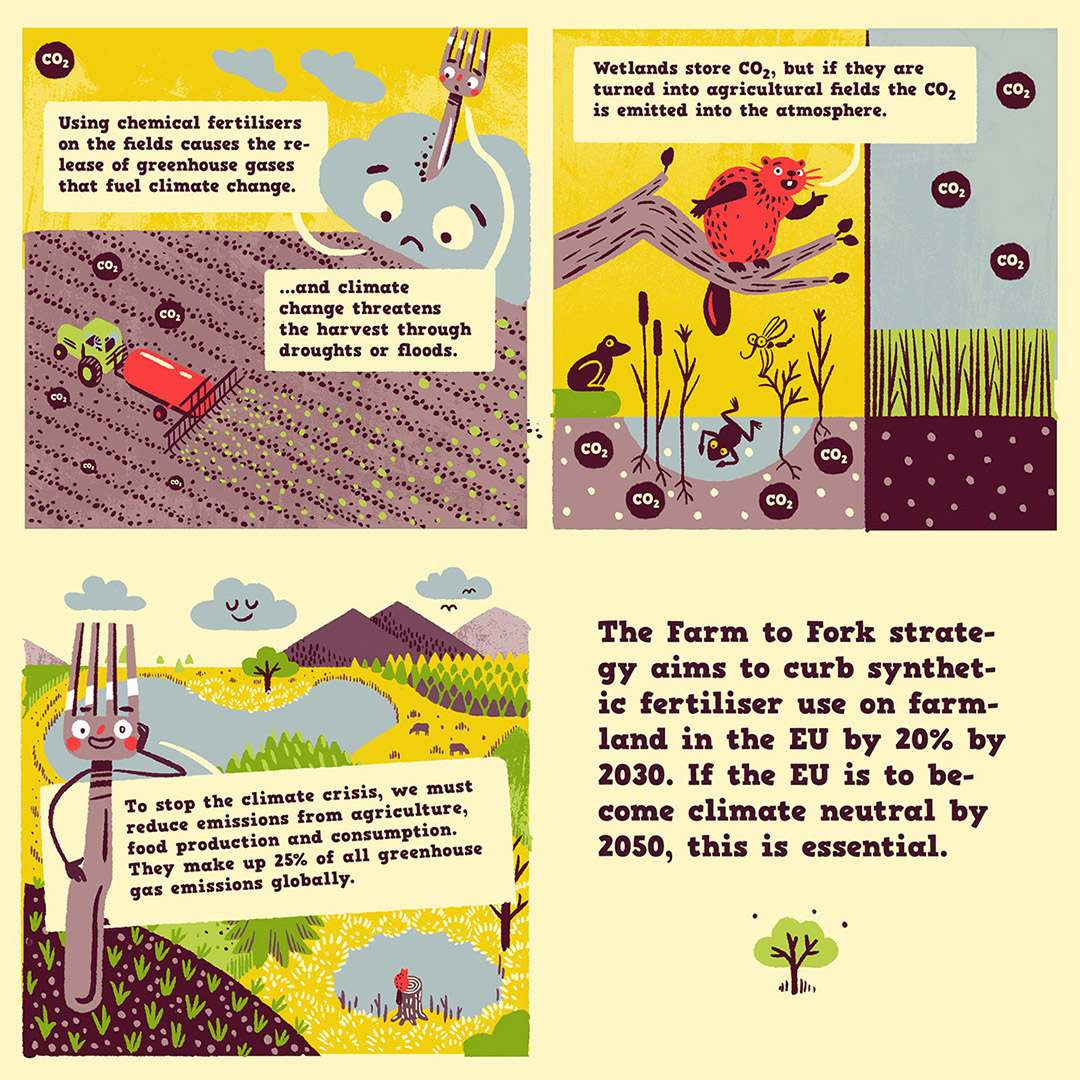 The last in the trio of comics spotlights the climate impact of chemical fertilisers, and the draining of wetlands for conversion to farmland. The Farm to Fork Strategy aims to cut synthetic fertiliser use on EU farmland by 20% by 2030, an important factor for reducing greenhouse gas emissions and pollution from agriculture.

Citizens on board for agricultural transformation

Good Food Good Farming’s campaign is a timely reminder of the agricultural transformation that must occur between now and 2030 if the food and farming objectives of the EU Green Deal are to be reached.

Along with the implementation and enforcement of existing legislation, agricultural policies must support the transition of farmers currently ensconced in the industrial model towards better food and farming.

The European Parliament is soon expected to publish its Own Initiative Report on the Farm to Fork Strategy. In April 2021 a coalition of civil society organisations including ARC2020 proposed 10 priorities that MEPs should endorse in this report. The priorities include a demand that the European Parliament fully endorses the Farm to Fork Strategy’s aspirational targets and calls for their translation in legislation and prompt implementation.

Of course, the Common Agricultural Policy looms large in this discussion. Though trilogues are continuing beyond the expected end-date last month, the Commission recently confirmed that it will not be withdrawing its CAP proposal.

As a result, the Withdraw the CAP movement is now targeting the message at MEPs to #VoteThisCAPDown. Otherwise, a business-as-usual CAP until at least 2027 would likely hinder the fulfilment of the Farm to Fork and Biodiversity Strategies’ aims.

The Good Food Good Farming campaign runs until June 21st so there’s still time to get on board and help spread the word for a better future for food and farming.

(Brussels, 02/10/13) BEGINS On Monday the European Parliament’s Agriculture Committee (COMAGRI) voted on the remaining issues on CAP reform. This follows the substantive agreement in June in Ireland and the final trilogue between Parliament, Council and Commission last week, where the Council strong-armed the Parliament into ceding its position, aided by the Commission. The committee vote still needs to be confirmed by Parliament as a whole in a plenary vote at the November session. “The co-decision procedure on CAP reform has been a long, epic process, full of delays and brinkmanship. In the end however, it also represents, unfortunately, a missed opportunity to really, radically reform the CAP. The momentum now turns to member states” Samuel Feret, ARC2020’s coordinator said. Substantial reform has been bypassed in favour of business as usual, questioning the whole notion of co-decision making and trilogue. The Council, together with anti-reform COMAGRI members opposed capping payments to even the wealthiest, while watering down greening with exemptions and loopholes and maintaining polluting and export dumping practices. Specifically The COMAGRI vote dealt with outstanding issues on DP (Direct Payments), CMO (Common Organisation of Markets), RD (Rural Development) and HZR (Horizontal Regulations). […]

Sebastian Lakner finds fault with the recent COPA contribution to our #AfterCAP debate in terms of market policies, red tape and public goods. He presents his suggestions. […]

A report for the European Parliament’s Agriculture and Rural Development Committee has called for an end to payments based on historical references, known as entitlements. Instead, a more uniform system, one fairer to younger farmers, should be introduced. […]