Launched in 2012, the Good Food Good Farming campaign is the action point of ARC2020.

Through the campaign, ARC2020 has organised common actions and mobilised citizens across Europe at key moments in the CAP reform process. Highlights include Go M.A.D. (Go Meet A Deputy), and the CAP SNAP photo campaign; as well as actions in Strasbourg and Luxembourg. 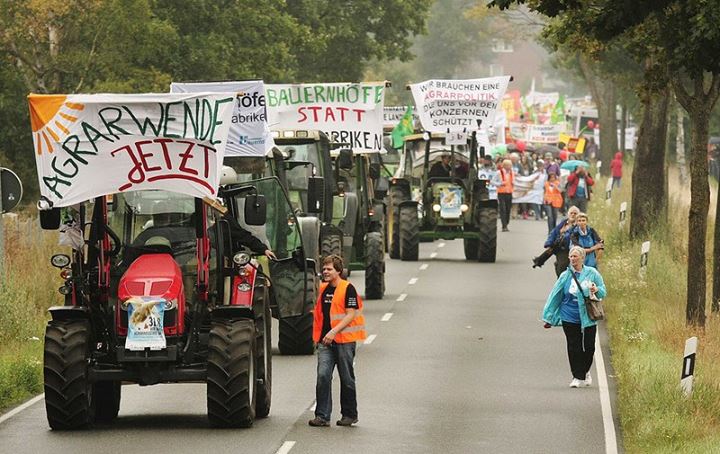 Yesterday morning, several hundred protesters descended on Strasbourg to call on the European Parliament to reform the CAP acknowledging the serious climate and environmental crises. This was the closing action of this years Good Food Good Farming campaign which saw over 90 actions in 23 countries. […]

In 2010 ARC2020 launched a “Communication from Civil Society to the European Union Institutions on the Future of Agricultural and Rural Policy” which was elaborated over six months and adopted  by a broad alliance of civil society organisations and networks. The Communication was submitted to the European Commission, to the Council and the Parliament on the same day when the Commission published its first outline for a reform of the CAP. During the following debate and negotiations of the future of agricultural and rural policies ARC2020 has strongly advocated for a paradigm change in agriculture and food systems and for an economic, social and environmental renaissance of rural areas. ARC2020 has become a European Platform for a debate on the future of farming and food. Our #ARC2020 conference – Good Food, Good Farming and a living Countryside –  is an opportunity for renewing our civil society’s agenda for the coming five years. We offer a framework for a  ROAD MAP of goals and activities which ARC2020 and its partners could follow in the coming years, based on […]

All our September Articles