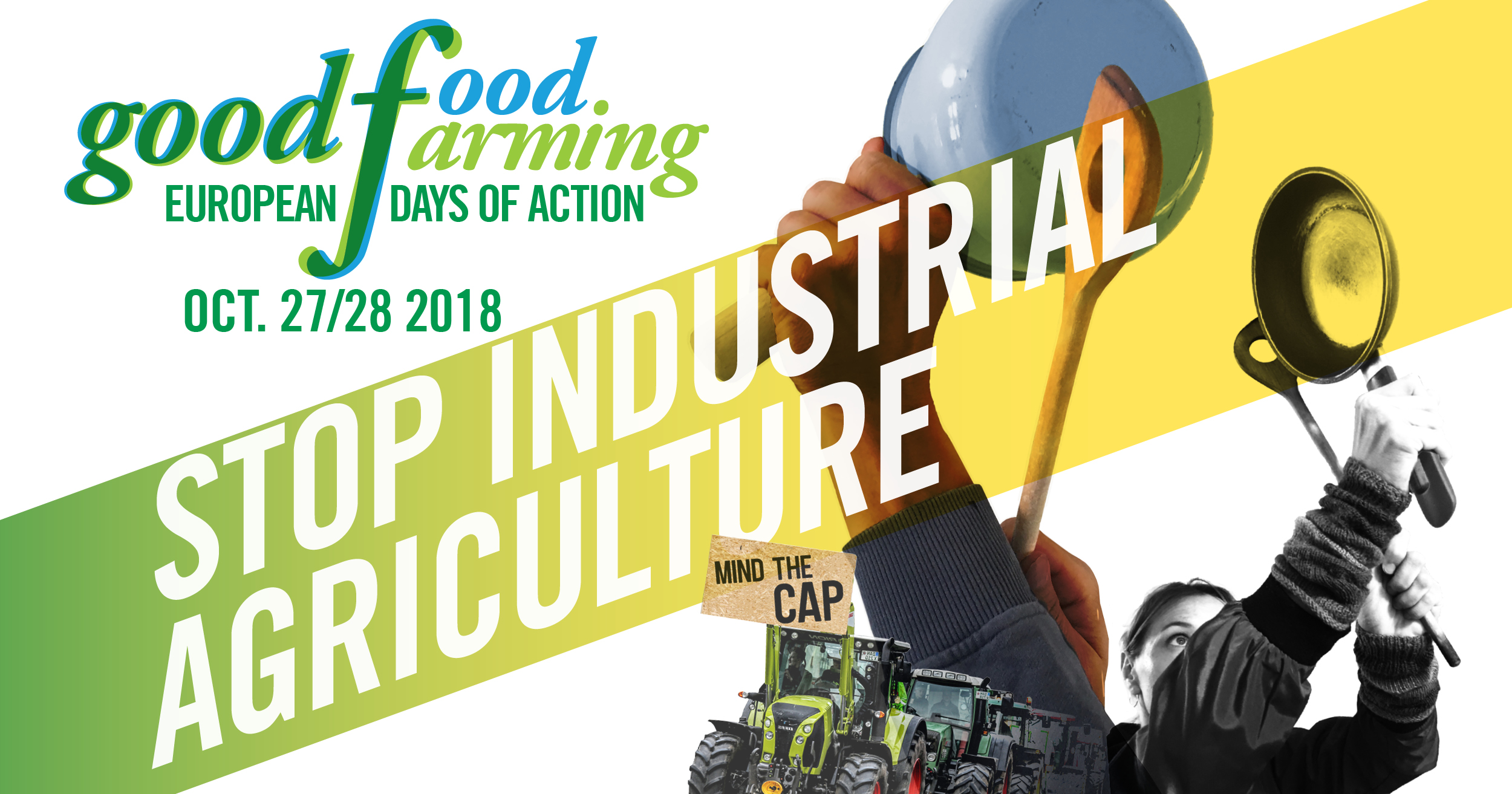 Across the continent, farmers, environmentalists, pastoralists, fishers are grabbing their pots and spoons to call for a more socially and environmentally just European food system. We want to see policy which supports small farmers and rural livelihoods, protects our soil, water, ecosystems and biodiversity and provides healthy food for all. We want an agroecological transition at the European level. On the 27th and 28th October, let’s make sure we are heard!

ARC2020 has teamed up with Meine Landwirtschaft, Friends of the Earth Europe, Heinrich Boell Foundation,European Coordination Via Campesina, BirdLife Europe, IFOAM EU,  Slow Food and Pour une autre PAC. Together we are organising a range of events throughout October culminating in a concerted weekend of action on the 27th and 28th. From dinners to demonstrations, picnics to panel discussions, farm visits to film festivals, events of all shapes and sizes are taking place. There is still time to get involved!

The coming months will see important developments in the formulation of the next CAP. In light of these crucial decisions, the GFGF Campaign calls for:

The diverse actions across the continent do not just call for an end to industrial agriculture and support for big business and landowners but also wishes to platform and celebrate the farmers, beekeepers, chefs, NGOs and citizens already engaged in creating a better food system.

Already, across the continent a range of creative events are taking shape. Each event is tailored to the local context: what are the specific issues facing that regions food and farming system? What are local citizens concerned about? Some examples include

A great thing about these action days is accessibility. The last Good Food March, in the run-up to the last CAP reform,  culminated with a demonstration in Brussels, to hand over their demands to relevant ministers in Brussels. In the absence of a large, centralised event like that, more energy and attention has been placed on encouraging a diversity of localised, creative actions across the continent. Since they no longer have to travel long distances, engaged citizens and farmers can organise their own events with greater ease.

It also means these events are tailored to local contexts. The Landworker’s Alliance, for example, is hosting the Good Food Good Farming March on Westminster, London 14th October.  Whilst the UK will no longer be directly impacted by  the next CAP,the future UK Agriculture Bill is passing through parliament at the moment. Throughout October the proposed Bill will be debated by MPs.

“As we leave the European Common Agricultural Policy, the UK agriculture bill will determine the future of our food system for the next 50 years or more,” says Jyoti Fernandes of The Landworkers Alliance, “If you want that food system to support farmers to produce environmentally friendly, healthy, affordable food for everyone, please join us.”

The march will culminate at the We Feed the World photography exhibition. Coordinated by the Gaia Foundation, the exhibit celebrates the small farmers which produce 70% of the world’s food. The events in London will round off with the London People’s Feast on 27th October. In light of Brexit and worrying anti-immigration rhetoric, organisers want to celebrate London as a global city, created and reliant upon its international connections. This is an open-to-all feast to celebrate the diversity and multiculturalism of the UK and the rich culinary heritage this has produced as well as to express solidarity with European partners.

The events will draw to a close with a disco soup in Brussels on the 19th November. EU agriculture ministers are invited to join us and will be presented with our set of demands for the future of European food and farming policy.

Want to get involved?

Several organisation representing farmers and environmentalists came together in Brussels to protest against the Mercosur trade deal yesterday. Responding to a call from the Belgian farmers group FUGEA, farmers and activists gathered outside the European Commission to protest against the threat posed by Mercosur to farmer incomes, the environment, and the rights of indigenous peoples in South America. […]