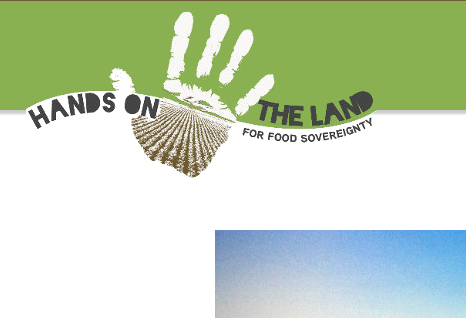 In February of this year, a new international alliance of 16 civil society organizations around Europe joined forces to tackle issues related to climate and agroecology, markets and food chains, land and water, seeds and bioeconomy. The alliance, Hands on the Land for Food Sovereignty (HOTL 4 FS), has launched its campaign and will work on these issues for the next 3 years.

Eco Ruralis, European Coordination Via Campesina (ECVC) and the Transnational Institute (TNI) are among the partners which includes “peasants and social movements, development and environmental NGOs, human rights organisations and research activists. We aim to raise awareness on the use and governance of land, water and other natural resources and its effects on the realisation of the right to food and food sovereignty. Through evidence-based research and material, public events and meetings, trainings, education and advocacy work, the campaign engages EU citizens, media, journalists, NGO practitioners, social activists, educators, students, politicians, policy and decision makers to take action for food sovereignty.”

The vision of our campaign revolves around the fact that everyday people should be able to control their own access to food, land, seeds and water. “Land, water, seeds and other natural resources are not only vital for the world’s small-scale food producers, they form part of our common heritage, are a matter of fundamental human rights concern, and are at the core of any vision for a sustainable and shared planet.”

The entire alliance will work together to conduct grassroots and policy work that will focus on supporting small-scale farmers and also growing the international peasant movement. A main argument that will be made is how agreocological farming affects our climate in a positive way. We will show the benefits of these agricultural methods in comparison to the industrial model which pollutes our environment and creates food losses as well as food insecurity.

We are calling for a stoppage of free trade agreements like the TTIP, land grabbing and plant and genetic material laws. We support a UN Declaration on the Rights of Peasants and also the Right to Food.

Our pan-European education and awareness raising campaign “aims to connect struggles for food sovereignty across the global North and South. This requires putting the visions and aspirations of those at the frontline of struggles for food sovereignty, whether they be small-scale fishing communities, peasants, pastoralists, indigenous peoples, young and prospective farmers, as well as the most vulnerable and marginalised, at the heart of policies which affect them. In the European context, this requires challenging the role the EU plays where it falls short and championing EU policies where they succeed. As such, our campaign pledges to engage EU development cooperation policy.”

HOTL 4 FS officially launched its campaign at the Expo dei Popoli in Milan at the beginning of June. It publicly supported alternative solutions surrounding the food-energy-land-climate nexus which was disregarded at the official Expo 2015. A speakers corner and energising activity was organized, a campaign press release was disseminated, interviews with the media were conducted during a press conference, other radio and web channel interviews took place and campaign fliers were distributed after a panel spoke about the importance of HOTL 4 FS’ strategic goals and projects. Our campaign website is now live and provides information on many subjects as well as video interviews taken with important actors present at the Expo dei Popoli expressing how they feel about these issues and the campaign. Other partners in the HOTL 4 FS alliance held national launch activities to celebrate the International Day of Peasants’ Struggles on April 17th including Eco Ruralis who did a photo project demanding peasants’ rights and a stop to TTIP negotiations. By connecting our common struggles and working together, we can take back people’s rights to food sovereignty!

How To Better Preserve Mountain Grasslands

How can farmers, researchers and administrators work together to really preserve mountain grasslands, which are threatened with scrub encroachment and land abandonment? Dr. Ika Darnhofer outlines some findings from a recent paper Darnhofer and colleagues published. […]