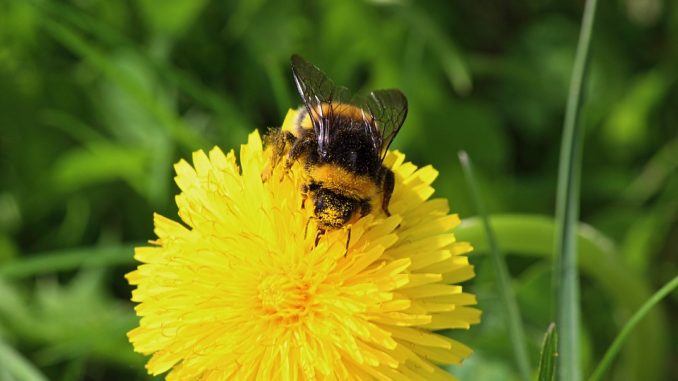 In Europe’s killing fields, the biggest driver of insect decline is monoculture-dominated and pesticide-reliant industrial agriculture. Meanwhile pesticide use is not declining. The EU should channel the billions it spends on CAP to support climate- and insect-friendly farming practices, argue Sandra Bell, Barbara Unmüßig and Jagoda Munić.

If we were to count them, we would have around 1.4 billion insects from an estimated 5.5 million species for each person alive today. We share our world with an incredible number and variety of six-legged animals. Some we ﬁnd beautiful; others, with huge fangs, are perhaps a little scary. Insects ﬂy, crawl, tunnel, sting and bite. They are experts at hiding. And they are at home in almost every ecosystem on Earth.

But they are facing massive threats. Maybe it is because of their seemingly inﬁnite numbers that we humans have for so long failed to recognize the scale of the danger that insects face. Or because there is little long-term research on their population status. Such studies are especially scarce in the southern hemisphere.

A very big chunk of the plant world depends on diligent pollination by insects. Bees must visit around 10 million plants to collect enough nectar to make half a kilogram of honey. In doing so, they carry pollen from ﬂower to ﬂower. Insects also clean up our world. They decompose manure as well as dead plants and animals, so improving the quality of the soil.

The public reacted all the more clearly to the alarming scientiﬁc ﬁndings on insect mortality that emerged in 2017. Because policymakers are not responding fast enough, citizens, environmental groups, farmers and political parties have joined forces and launched initiatives to protect insects in several EU countries. For example in the German region of Bavaria, where 1.75 million people supported a referendum for more nature conservation. Or in the UK the Bee Cause in 2012 aiming to reverse bee decline. A European citizens’ initiative, appropriately named “Save Bees and Farmers”, was launched in October 2019.

Farming must become part of the solution

Industrial agriculture, with its ever-bigger ﬁelds, its reliance on pesticides and its monotonous landscapes, poses one of the biggest challenges to the world of insects. There is no alternative: to protect insects, farming must become part of the solution. Not just for the sake of society, but also for the sake of farming itself – because it, too, needs insects. Nevertheless, since autumn 2019, tractors have blocked the streets of Berlin, Paris, Amsterdam, and Madrid, as thousands of farmers have voiced their displeasure at stricter environmental protection regulations.

Their anger is a result of decades of failure in agricultural policy. At the 1992 Earth Summit in Rio de Janeiro, the EU committed itself to protecting biodiversity. Way back then, policymakers could have set a course in the right direction.

But nothing happened. Farmers deserve a better set of policies: one that sets the right incentives and policy frameworks for the future. An insect-friendly type of farming has to be promoted. In practical terms, that means ﬁnancial support.

We do not pay enough attention to protecting insects. And farmers do not get paid for doing it either. But this is exactly what must happen. The European Union should use the nearly 60 billion euros it allocates to agriculture each year in a targeted manner to support climate- and insect-friendly farming practices. In the long term, we can only justify spending such sums if this money is used for projects that are important to us as a society.

It is not enough to merely keep watch on the ﬁelds outside our own front doors. Much of the fodder that feeds the millions of animals that supply our demand for cheap meat is imported from South America. There, in one of the richest areas of the globe in terms of biodiversity, millions of hectares of forest are being cleared to make way for soybeans and cattle ranching. The European Union is negotiating a free-trade agreement with the Latin American Mercosur bloc. This will allow even more cheap farm products to enter Europe without any trade restrictions – and harm Europe’s farmers as well as the world of insects.

That is why policymakers must be active internationally. A course of action can be agreed on during the 15th UN Biodiversity Conference in China in 2020, where the EU could play an important role and put
the protection of insects right at the top of the agenda.

By presenting the facts and ﬁgures in this Atlas we want to contribute to a lively debate on agriculture and insects. At the same time, we want to illustrate how diverse, colourful and worthy of protection the world of insects is. Our intention is to show that agriculture and insect conservation need ambitious policies, not only in the European Union, but also worldwide. The challenges are large, and to meet them, we must seek solutions together.

Europe’s fields and meadows used to be abuzz with insects, all busily flitting from flower to flower in search of nectar and pollen. With the spread of chemical-intensive farming, the insects are disappearing
and the fields are falling silent.

In Europe, the main pollinators are bees, hoverﬂies, butterﬂies and moths, plus some beetles and wasps. Around 84 percent of crop species and 78 percent of wildﬂower species in the EU depend at least in part on animal pollination, and up to almost 15 billion euros of the EU’s annual agricultural output is directly attributed to insect pollinators. This ecological and economic importance makes the current considerable decline in pollinators worrying. Decreases in wild bees and hoverﬂies have been clearly documented in parts of Europe. At least one out of ten bee and butterﬂy species is threatened with extinction.

The lack of data makes it difﬁcult to determine how many species are actually at threat: is it possible to count those species for which no (or inadequate) data exist? Of the 2,000 wild bee species in Europe, 9.2 percent are thought to be threatened with extinction, according to the European Red List. A further 5.2 percent, or 101 species, are considered “near threatened”. However, for more than 55 percent of all species not enough data is available to evaluate their risk status. As more data become available, many of the currently unclassiﬁed bees may prove to be threatened as well.

Europe’s most widely managed pollinator is the honeybee. Most of its wild and feral colonies are already lost, and existing colonies are managed by beekeepers. For some years, honeybee losses were severe and widespread throughout much of Europe, but since 2004 the number of hives has increased steadily. In 2018, there were more than 17 million hives in the EU.

Intensive agricultural production is considered one of the most important drivers for the decline in pollinators. Land-use changes for agriculture and agricultural intensiﬁcation result in the loss and degradation of habitats, and less crop diversity in the ﬁelds. This results in a loss of diversity in ﬂora, reducing food supplies and nesting opportunities. Exposure to insecticides poses an additional threat to pollinators.

Research in Sweden shows that there is not only a decrease in abundance – there is also a reduction in diversity. Bumblebee populations there started changing in the 1960s. Two generalist species have increased in relative abundance: they now completely dominate the bee community at the expense of other specialized species. This may be related to the loss and fragmentation of key bumblebee habitats in the agricultural landscape, such as hay meadows and semi-natural pastures.

The butterﬂy’s status is equally endangered. Of the 482 different species found in the EU, 7 percent are threatened with extinction, and another 11 percent are considered as “near threatened”. About a third of Europe’s butterﬂy species are declining, with a 39 percent drop since 1990. Researchers also attribute this decrease to agricultural intensiﬁcation, which leads to uniform, almost sterile grasslands for butterﬂies. The use of fertilizer reduces plant diversity on the pasture, while high frequency mowing and haymaking are particularly detrimental for pollinators.

Agrochemicals such as fertilizers and pesticides have a signiﬁcant negative impact on pollinators. They do not just affect the local area where they are applied, as once thought, but inﬂuence the occurrence of pollinators on a large scale across Europe. Even though the EU’s regulatory system for pesticides is widely regarded as the most rigorous in the world and the EU has been promoting reduced pesticide use and the adoption of integrated pest management practices, the amount of pesticides used in the EU is not decreasing.

Neonicotinoid insecticides have been proven to be particularly harmful to bees. A report presented by the European Food Safety Authority in 2018 confirmed that most uses of neonicotinoids pose a risk to wild bees and honeybees. This was based on a review of more than 1,500 studies. A study covering 2,000 hectares across three EU countries, found evidence of harm to honeybees and wild bees. It concluded that in bumblebees and solitary bees, higher concentrations of neonic residues found in nests led to fewer queens. Another study shows that honeybee colonies that were chronically exposed to neonicotinoids performed
worse in the short-term: the number of adult bees fell (–28%), as did the amount of brood (–13%), honey production (–29%) and pollen collection (–19%). There is also evidence that the use of neonicotinoids is a factor in the decline of farmland butterflies in England.

As a result of overwhelming scientific evidence, the EU has banned and restricted the use of some neonicotinoids. Member states can still apply for emergency use. This authorization is only meant for a plant-protection crisis where other means of protecting the crop are not available – but it has been used more widely. Seven countries have been investigated for inappropriate use of this authorization process. In addition, new neonicotinoids – such as Sulfoxaflor – have been approved by the EU.

Farming subsidies from the Common Agriculture Policy need to be shifted to support high nature value farming, organic farming, and agroecological systems. Stricter regulations for pesticide approvals are also needed. These measures will help strike a balance between agriculture, habitats and insects in the EU. Since political decision makers have not yet acted appropriately, the EU-wide citizen initiative “Save Bees and Farmers” is now needed to show decision makers how important this issue is to European citizens.

This is an excerpt from Insect Atlas 2020 published by the Heinrich Böll Foundation and Friends of the Earth Europe. The introduction is by Barbara Unmüßig and Jagoda Munić, and the chapter “Pollinator Decline in Europe: Killing Fields” is by Sandra Bell.

The EIP – European Innovation Programme – offers significant potential for citizens and agri-environment. What’s in it? […]