By embracing the productivist paradigm of producing more food to feed a rapidly growing population, Copa Cogeca’s vision for the future CAP ensures that crises in EU’s agriculture sector will persist in the future. The “feed the world” narrative, also championed by the European Commission, has led to an endless cycle of overproduction and overconsumption and has driven away small farmers unable to compete under increasingly difficult circumstances.

Promoting EU consumption and opening up new markets for exports have been the answer to the crisis. But short term gains, by keeping production levels high and some farmers happy, will not work for much longer and drive us further away from any sustainable future.

Ensuring a stable food supply for Europeans and a stable income for farmers was the original goal of the CAP. Subsequent controversies surrounding its enormous budget, the drive for overproduction which resulted in vast surpluses, the intensification of the sector which led to fewer farmers and bigger farms, and the dependence on a subsidy system which disproportionately benefits big farms have dominated the debate.

Since the 1960s, pressures from industrial agriculture have had a series of negative impacts on the environment, including inefficient use of resources, expansion of monocultures, declining soil quality, gradual loss of diverse landscapes, increasing dependence on chemical inputs for crop production, decline of wildlife, water pollution and worsening air quality. Agriculture is also an important contributor to climate change. Mitigation measures have not been sufficient to reduce GHG emissions and the degradation of our environment. Forecasts suggest that farmers will struggle to adjust. Many years of short term measures have not provided long term solutions.

Addressing the various environmental problems linked to agricultural intensification and responding to new challenges by proposing sustainable solutions will require a complete shift towards a well-functioning food and farming system. It will require a transition, through a holistic approach, which will integrate sustainable food and farming measures into one policy.

Such a policy should fulfil a number of objectives, including:

As the CAP consultation period approaches, we should turn our attention to industrialized animal agriculture, one of the core contributors to many current problems. The sector comprises up to 70% of overall agricultural activities through production of feed or animal products. The animal agriculture sector receives considerable subsidies to keep it alive.

The negative impact of industrial livestock production on the environment is undisputed.

Yet, the reality of animal agriculture is often ignored. Misleading impressions are widespread. Idyllic images of rolling pastures and grazing animals are not an accurate reflection of livestock farming in the EU. What’s hidden behind many of our products is the horrific mistreatment of animals.

The large majority of EU pigs and poultry are farmed industrially.  In addition, many dairy cows are ‘zero-grazed’ never or rarely having access to pasture. Most farm animals in the EU are kept indoors in high densities in barren conditions or confined in cages or crates, unable to perform their normal behaviours. These conditions cause added stress to the animals and undermine their health, making them more vulnerable to disease and in need of antibiotics. Genetic selection for fast growth or high yields seriously impairs their health. Mutilations such as tail docking, castration and beak trimming are routinely performed. Many farms do not provide even the basic enrichment materials.

Long distance transport of animals adds to their suffering and breaches of EU law are a common occurrence* (see references below). Live animal exports outside the EU are increasing and animals are subjected to the worst mistreatment, just to keep EU production levels high and farming profitable. Slaughter conditions are often inhumane, in violation of EU law. Existing animal welfare legislation provides only for the absolute minimum standards and non-compliance is widespread. A lack of a proper enforcement mechanism along with the tendency to de-regulate have resulted in the inherent cruelty associated with industrial animal production, the end result of the high productivity model. Given the extent of animal related agricultural activities, animal welfare should be among the major considerations in the formation of a food and farming policy.

The upcoming year represents a big opportunity to debunk the myth that we need to produce more to feed the world. As Hilal Elver, UN Rapporteur on the Right to Food has stated, the view “that humankind will not be able to feed itself unless current industrial modes of agriculture are expanded and intensified … is wrong and counterproductive and will only serve to exacerbate the problems experienced by the current mode of agriculture … there is a need to encourage a major shift from current industrial agriculture to transformative activities”. 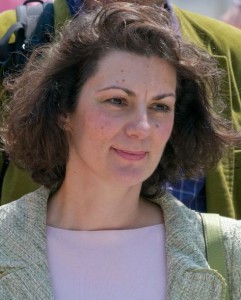 Reassessing the current model and its failures will enable us to respond to future challenges. Linking production to consumption and farming to food will transform the existing policy and meet the challenge of feeding a growing population while preserving resources for future generations.

Olga Kikou is the European Affairs Manager for Compassion in World Farming, an international organization working on farm animal welfare and sustainable food & farming policies. She is currently involved in lobbying the EU institutions, promoting campaigns at EU level, engaging with civil society organizations and other stakeholders to develop joint policy strategies to bring an end to factory farming.

Exposé of suffering involved in EU exports of live animals: Animal welfare groups call for an end to inhumane trade

About Olga Kikou 2 Articles
Olga Kikou is the European Affairs Manager for Compassion in World Farming, an international organization working on farm animal welfare and sustainable food & farming policies. She is currently involved in lobbying the EU institutions, promoting campaigns at EU level, engaging with civil society organizations and other stakeholders to develop joint policy strategies to bring an end to factory farming.

The EP’s final vote on the CAP intensified the failure to deliver a fairer, simpler and greener agriculture policy for Europe. […]