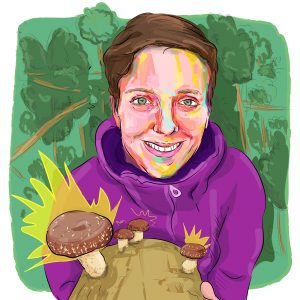 Winter and the fierce storms that came with it were a blow for our budding agroforestry farm in Italy. We hear from farmer Chiara Garini about how she dealt with the extreme weather events, how she plans to prepare for more such events in future and how she’s prepping for the year ahead.

Around 14 million trees were destroyed in the severe storms which hit northern Italy at the beginning of November. About twenty of these were spruces from our own woodland. The photo below shows you how it looked just a few days after my last letter, where I proudly wrote about how well we have prepared our woodland area for shiitake forest farming…

Fortunately, the inoculated wood logs are tough, so they were not damaged by the fallen trees. Now we have some months to clear up the area – once again – before starting the shiitakes harvest in spring. At least we are now pretty sure all the weak trees have been removed from this forest area which hadn’t been managed in decades before we took it over. Let’s hope it can now better resist the extreme weather events likely ahead of us in future.

But let’s move beyond the sour note this letter started on! During cold months ordinary farming activities pause and it’s time for an essential task for a budding agroforestry farm: planting trees.

In November, we planted one hundred trees in the fields we had left at 600 m.a.s.l., in Cavedine valley. So now all the 5 fields we had available – a total of about 1,1 ha – are planted with trees mycorrhized with truffles (Tuber spp.).

Pedo-climatic conditions are the first issue. Each truffle species has very specific requirements in terms of soil composition, environmental conditions and symbiotic plants. Therefore, before deciding to plant truffle mycorrhized plants all these aspects have to be taken into account.

However, reading our soil analysis and some textbooks on truffles cultivation was not enough to be sure whether it was the case to cultivate truffles and what species of truffles. Only when we were counselled by a senior expert, who we got to know thanks to local mycological groups and associations, we understood we could take on the challenge. In our case, soil and environmental conditions were suitable for the growth of black summer truffles (Tuber aestivum), which also grow spontaneously in our area.

We liked the idea of growing truffle mycorrhized trees not only because they are not too labour intensive or requiring too much economic investment for the coming years – truffle production should start in 6-8 years – but especially for their ecological role.

The fields we had were quite degraded. For decades they had been conventionally cultivated with maize crops with heavy machinery and pesticide use. This is not a desirable soil for organic farming. Remarkably, truffle mycorrhiza thrive in such conditions as they spontaneously grow among pioneer species in the succession stages from degraded or man-made areas to forests. Truffle cultivation would not be possible in a forested area or where other trees are present, as other mycorrhizal mushrooms could outcompete the truffles. In a degraded soil instead truffle mycorrhiza can expand with little or no competition from other species.

Given the economic potential of truffles market and the fact that very low inputs are required for cultivating truffle mycorrhized trees (they are robust varieties which do not require fertilizers or pesticides but only a minimum shallow tillage and emergency irrigation for the first years), I believe truffle cultivation could play an important role in stimulating the spread of  agroforestry and the diversification of farmed tree species in many areas of southern and central Europe.

Agroforestry is the deliberate integration of woodland elements and other agricultural crops in order to maximize the economic and environmental benefits achievable from the interactions of such diverse components. The cultivation of trees mychorrized with truffles fully belongs to this concept.

The second major factor affecting whether or not truffle cultivation is successful is choosing the plants nursery. As far as I know, the world of truffles is a world of fraud. Easy profits can be made by selling supposedly truffle-mycorrhized trees at very high prices, convincing the aspiring truffle cultivator about guaranteed success and then disappearing. In our case, we have built a trusting relationship with a small scale independent nursery, who has been following us since the soil and environmental analysis and species choice and is committed to keep advising us in the coming years with regular control of the mycorrhization status.

Now, as the new year kicks off, it is time to take stock of the situation! We have (almost..!) prepared the woodland area for shiitakes forest farming; we have finished planting the truffles mycorrhized trees in the fields at 600 m.a.s.l; and we have also started planting the top canopy layer of our developing forest garden in the land we have at 200 m.a.s.l . I will tell you more about the progress in the thoughts and practices of our forest garden in a next letter.

More Letters From a Farm in Italy

Germany | Hitch Up the Wagon it’s Time to Transform Agriculture

Agricultural industry, species extinction, nutrition, climate: If we reform agriculture, we could achieve great things. Such reform should be a priority for the incoming “traffic-light” coalition government in Germany, but will it rise to the task? Tanja Busse has more.  […]