On 20 August, more than 30 farmers, students and enviromental activists blocked the entrance of the port in Brake. The port is a huge hub for animal feed, hosting Europe’s largest storage capacities and acting as the main supplier of intensive farming systems in Germany. Among the stored goods is an increasing amounts of genetically modified plant products, especially soy as a heavily-used protein donor. 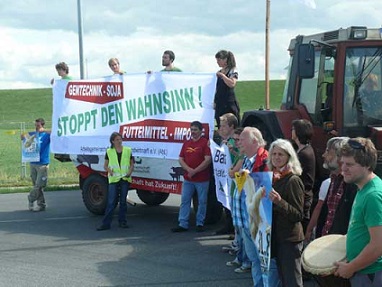 Through the action, the alliance of activists wanted to highlight the negative social and ecological impacts of the mass import of animal feed, and especially GM soya.

“The madness begins in the exporting countries”, explains Paulo Alfredo Schönardie, a landless peasant from Brazil, currently a doctoral student at the University of Hamburg: “With the soy monocultures, valuable ecological areas such as rainforests or savannas are destroyed. Small farms are sold. Young farmers like me do not come ashore. Today 1% of large farmers have 46% of private land in Brazil. This has nothing to do with food sovereignty!”

Ottmar Ilchman, dairy farmer from Ostfriestland and state chairman of the Small Farmers’ Association (AbL) from Lower Saxony added: “We must stop living at the expense of others. We need to consciously focus on a rural, regional and ecological food production. Federal and state governments must finally ensure the implementation of the EU agricultural reform and initiate a change of strategy in agricultural policy.”

A tractor, banners, good music and constructive speeches were enough to block 35 trucks in an hour and in this way to show how citizens can intervene peacefully but directly. 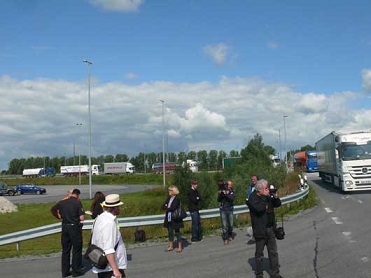 Coffees were distributed by the activists to the truck drivers to invite them in the discussion and show them that the action was of course not against them, but against the madness of a system of which they are also victim. TV and written-press answered the invitation to report about this original action and relay its important message. (Pictures and report in NDR, Radio Bremen and Kreiszeitung).

This action was the preparation for the even bigger event in the end of this week in Wietze which will take place in front of the biggest poultry slaughterhouse in Europe. These activists from different movements and fields were exchanging their beliefs and engagment in preparation of their common participation in Wietze’s workshops where they intend to discuss the alternatives to the agro-industry madness.

Leave it to Tesco: how the UK ignores food security