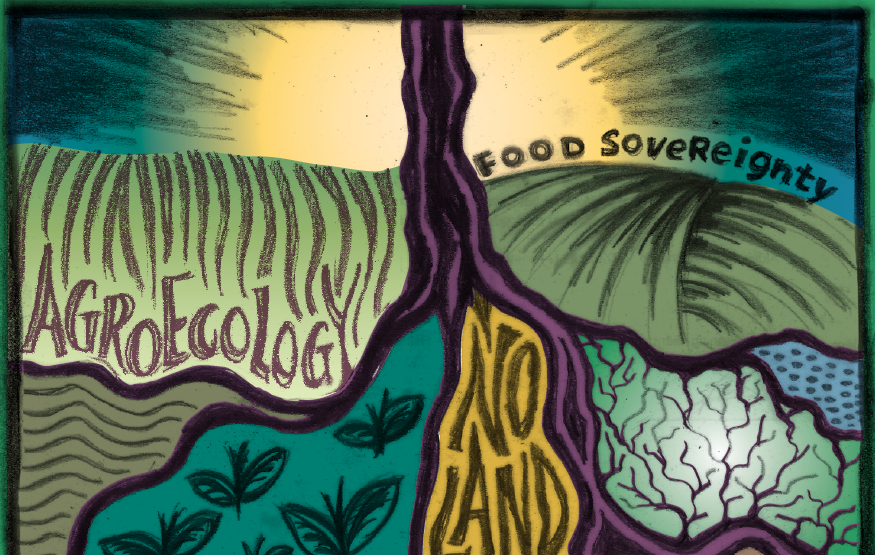 It is time to rediscover the roots of our resilience by grounding land policy in collective action and democratic forms of land politics. That’s according to a new report led by Transnational Institute. This position is based on an understanding of land not as a commodity but as a common resource, a living territory and a natural landscape. It corresponds closely with a philosophy of land stewardship: a deep and abiding relationship to land that is based on care-taking and an appreciation that land is held in trust, for now and for future generations. Sylvia Kay of TNI has more.

The EU’s Green New Deal (EGD) proposes to transform Europe’s economy through an aggressive carbon emissions reduction target, setting Europe on a pathway to become “the first climate-neutral continent” by 2050. This is done on the basis that “climate change and environmental degradation are an existential threat to Europe and the world”. Correspondingly, a suite of policies are to be rolled out over the coming years meant to advance decarbonisation and energy efficiency strategies in such diverse sectors as industry and manufacturing; energy; public transport and mobility; building, housing and construction; and agriculture amongst others.

Within the food and farming sector, the Farm to Fork (F2F) Strategy represents the major flagship policy of the EU to advance the targets set by the EGD through such measures as sustainable food labelling; shorter, more circular food supply chains; a reduction in food loss and waste; curtailing the use of harmful pesticides and the over-reliance on antibiotics in the industrial livestock sector; and support for organic farming.

While all these measures are commendable and the threat assessment underpinning the need to take urgent climate action is accurate, the F2F strategy still represents a missed opportunity to truly rethink the model of food production underpinning EU agriculture. Agroecology, while mentioned, is not featured prominently while a broader understanding of the way in which land policy impacts access to land and the viability of various forms of farming throughout Europe is not fully appreciated. The result is that support for large-scale industrial farms and measures which increase land concentration and land speculation are likely to continue, even if this directly undermines the stated goals of the EGD.

This is the central argument of a new report launched by the Nyéléni Europe and Central Asia food sovereignty movement in collaboration with the Innovative Land Strategies partnership.

The report argues that at this critical moment, it is time to rediscover the roots of our resilience by grounding climate and food policy in collective action and democratic forms of land politics. This is based on an understanding of land not as a commodity but as a common resource, a living territory and a natural landscape. This approach to land helps to sustain more ecologically regenerative models of food production such as organic agriculture and agroecology as practised by many of Europe’s small farmers, fishers, pastoralists, and indigenous peoples.

A recent virtual exchange organised with two EU policymakers on the basis of this report picked up on these points.

Guillaume Cros, a member of the EU’s Committee of the Regions and rapporteur of a recently released opinion on agroecology, argued that it is key to build in agroecological practices into national regulations. He noted that the current proposal for the CAP reform has not included any such measures, largely due to the influence of big farm lobbying groups within powerful member states such as France.

Benoît Biteau, MEP for the Greens/EFA grouping from France, concurred, arguing that large industrial farms are the complete opposite to agroecology. Yet the CAP, by linking economic support to farm size – as opposed to for example number of persons employed – and by promoting a general export-orientation of EU agriculture, continues to bolster this model. He pointed out the inconsistencies of these measures with the EGD (in terms of biodiversity, health, climate, and sustainability) and urged people to use the transition period up to 2023 to send a strong message to the European Commission to make sure the CAP is aligned with the principles of food sovereignty and agroecology.

In this sense, the EGD fails to truly transform Europe’s economy despite the clear intention of the EGD to connect the dots and move away from siloed approaches. Within European land policy, it would require challenging a status quo which is based on private property rights and the free movement of capital towards an approach which values food producers and works with natural cycles, harnessing local knowledge and skills set within a common political framework of food sovereignty.

One of the key mechanisms through which greater coherence could be given to questions of land tenure and sustainability is through the development of a new European Land Directive. The report makes the case for such a Directive as a way to counterbalance a number of alarming land dynamics at European level including increasing land concentration, land speculation, farmland loss and instances of land grabbing.

Both policymakers reacted positively to this proposal.

Biteau stated that a framework directive could be considered at EU level to preserve the fertility of soil and to ensure that agricultural land is dedicated to food production and not converted to other uses such as energy production. He believed that four-fifths of states would validate such a directive that would then need to be transposed to member-state level.

Cros also highlighted other recommendations of the report such as the creation of a European Land Observatory to monitor land dynamics across the EU. He emphasised the ways in which the different levels of EU policymaking interact, arguing that we are not going to see a green, agroecological transition without invoking local authorities.

Ultimately, decision-makers at all levels – local, national, and transnational – will need to be engaged in order for a true Green New Deal to become a reality, whether it is by farmers and community groups coming together to mobilise around local land struggles or by guarding against the corporate capture of agroecology. We all need to rediscover the true roots of resilience.

Sylvia Kay joined TNI in 2011 as a researcher working on issues around land tenure, natural resource governance, and agricultural investment. She has written various studies and policy briefs for TNI on land and water grabbing, the role of public policy in rural development, and different models of agricultural investment. She coordinated the Hands on the Land for Food Sovereignty alliance and is currently involved in a new European project on innovative land strategies for agroecology.

The European Green Deal and CAP emphasise digitalisation for ecological transition and sustainable growth. However, as Gianluca Brunori argues, we need to understand digitalisation as a process of social transformation, which takes place both as an effect and as a driver of technological change. A careful analysis of needs, opportunities and threats, including at the local level, add the necessary nuance for appropriate digitalisation. […]