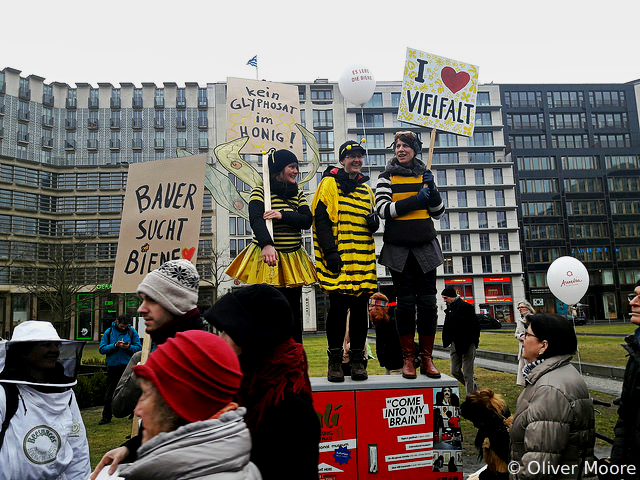 The European Citizens’ Initiative ‘Save Bees and Farmers!’ alliance – a network of civil society organisations in agriculture, health and environmental protection – is calling on the European Commission to propose legislation to phase out synthetic pesticides by 2035, to restore biodiversity, and to support farmers in the transition. As it stands, more than 750,000 citizens have already put their names to the demands of ‘Save Bees and Farmers!’. If they reach 1 million signatures by the end of September, the European Commission and the European Parliament will be required to respond.

An agricultural model that’s better for bees and for farmers could be forced onto the political agenda if enough EU citizens call for it by September 30th. The European Citizens’ Initiative ‘Save Bees and Farmers!’ needs to reach at least 1 million signatures by the end of this month.

At the time of writing, the European Citizens’ Initiative (ECI) has over 750,000 signatures and just 23 days remain to get it over the line. With the backing of 1 million citizens, the ECI will compel the European Commission to take action.

The political agreements reached on the future Common Agricultural Policy 2023 – 2027 provide little opportunity for a paradigm shift to fairer, greener and rural-proofed European agriculture. But the long battle for better food and farming systems persists.

The ECI is another avenue to introducing paradigm-shifting legislation. However, it needs more Europeans to add their voice to these demands in the next three weeks.

European agriculture at a dead-end

The ECI ‘Save Bees and Farmers!’ alliance – a network of civil society organisations in agriculture, health and environmental protection – is calling on the European Commission to propose legislation to phase out synthetic pesticides by 2035, to restore biodiversity, and to support farmers in the transition.

The alliance launched a European Citizens’ Initiative to put the demands on the political agenda, but time is running out to gather the required number of supporters.

Civil society organisations, grassroots movements, beekeepers, local citizens’ initiatives, farming groups and environmental scientists comprise the broad alliance that initiated the ECI. Their aim is to create an agricultural landscape in Europe which enables bees and farmers to thrive in a healthy environment for the benefit of all.

The alliance recognises that the current European agriculture model is at a dead-end – oriented towards ever higher yields through the use of agrochemicals, bringing eco-systems to the brink of collapse, seriously threatening the environment, future food supply, and our health – but that a different agricultural model is possible. This agricultural system would be free of agrochemicals, and support bees and farmers alike, preserving and enriching the diversity of landscapes, food and agricultural traditions in Europe.

We have less than a month to collect 1 million signatures for our ECI. We currently have >750k.

Demands of ‘Save Bees and Farmers!’

2) Restore biodiversity
Restore natural ecosystems in agricultural areas and transform means of production in such a way that agriculture again contributes to the promotion of biodiversity.

3) Support farmers in the transition
Reform agriculture by prioritising small scale, diverse and sustainable farming, supporting a rapid increase in agro-ecological and organic practices, and enabling independent farmer-based training and research into pesticide- and GMO-free farming.

More than 750,000 citizens have already put their names to the demands of Save Bees and Farmers!

Once the ECI crosses the threshold of 1 million signatures by the end of September, the European Commission and the European Parliament will be required to respond.

By signing and sharing the European Citizens’ Initiative you can join the fight for a better agricultural model in the EU!

The “Green Deal” Commission promises big spending on climate. If climate markers are to be believed, the current CAP accounts for 22% of the EU’s climate spending. The post-2020 CAP is poised to take even more climate credit. But the Institute for European Environmental Policy (IEEP) claims the Commission’s climate markers miss the mark. In a report released earlier this month the IEEP sounds the alarm on faulty climate accounting and greenwashing of direct payments. […]

Public places in France – schools, parks, forests, roadsides – are no longer treated with herbicides, while more restrictions are coming in in 2019. Senator Joel Labbé has been the driving force behind these restrictions. ARC2020 has worked with Labbé to help bring his work to the European stage. […]

“A sustainable food system is not about reducing animal-product consumption so to ‘free-up’ land for direct-for-human-food plants: rather, it is about using the land now used for feeds for shipping to animals confined elsewhere, for grazing livestock – be they ruminants, pigs or poultry.” Stuart Meikle outlines his position. […]