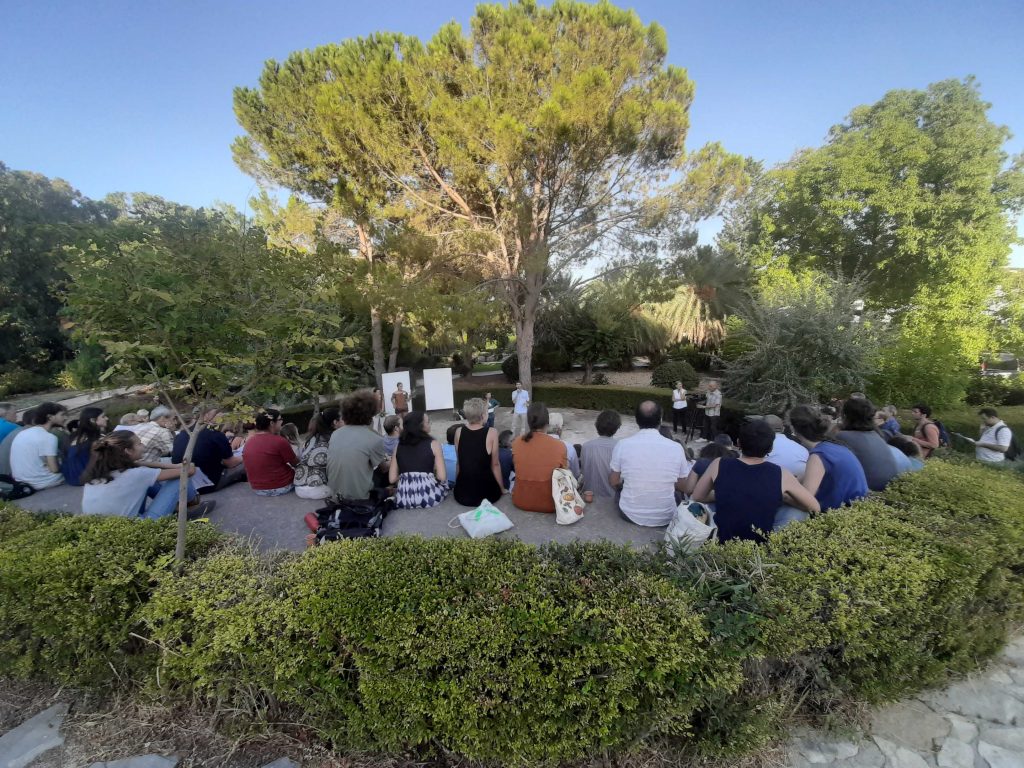 What is this Thing called Agroecology? ARC2020’s Oliver Moore attended the 2nd Agroecology Europe Forum at the end of September. In this second of three reports from the event, he ponders the triad – science, practice and movement – and wonders how they – and other elements – intersect. Featuring audio from a number of participants, including Lili Sára Balogh, Emile Frison, Jenny Evgenia Gkiougki and Stéphane Bellon.

Molly, herself an organic mixed farmer from the US, had hit upon something in the workshop called “Public image of farmers – abusers or saviours? Finding a way to balance the portrayal of farmers”.

Our task in this workshop was to find and assess, from a number of perspectives, articles about farmers in relation to climate change and other environmental stresses. And yet, so often, what emerged were articles about farming systems, where farmers were blamed by implication for big broad complex problems. What emerged as something of a solution was to bring farmers front and centre – to give them a voice. To hear about how these environmental stresses are impacting them too, and what they are doing about it. And we need to hear from them regularly – not just as a once off.

Its great when the three agroecology elements – science, practice and movement – come together in one session. In this case, the science of climate change, the practice of farming and the support of social movements coalesced. And while there were distinct streams of each Agroecology Europe’s 2nd Agroecology Europe Forum, inevitably there was also lots of cross pollination, of mixed approaches, of conscious congruity, as fits the diversity of agroecology itself.

And so we Begin

Our (very long!) opening session saw a great spread of types of speaker; a local farmer, a Norwegian farmer and social movement actor, supportive institutional voices, a high profile food systems advocate, local organisers, and an academic unpacking of the cognitive dissonance between the slogans of agroecology and the reality of its need to integrate feminism.

(Above: Lili Sára Balogh from Hungary discusses what she liked about the opening forum)

Even here, the categories meld, with the Norwegian farmer – Marielle Vink-De Roos – representing ECVC. And yes, she is a mixed farmer, as Ioanna Dialyna, our Greek farmer, is too. Like ripples floating out and into each other from stones flicked across a still pond, with agroecology too, there is a tendency towards recursion.

After this session, the programme itself opened out and became more aptly inclusive and participatory, with a small group chats in the warm outdoors. Our focus was on agroecology obstacles, priority actions and what Agroecology Europe specifically could do about it.

In this author’s session, much was said about the problem of silver bullet thinking and solutions. Problems are often complex, interconnected and with unexpected knock on effects, yet the supposed solutions to many of the world’s issues are presented as simple, strong and clear. Often these super-solutions come with venture capital backing, and the demands for rapid returns that accompany the fast cash, from vertical farming to gene editing.

Or to put it as Bertrand Russell put it (building on the shoulders of Mark Twain and W.B. Yeats before him) “The trouble with the world is that the stupid are cocksure and the intelligent are full of doubt.”

So banning this or focusing exclusively on that may have unintended, negative impacts, unless a whole, systemic and system change approach is taken.

Agroecology is well placed to deal with complexity, and with the muiltiple challenges we face, from biodiversity to climate to rural depopulation. The question is, can society take the required time to rework farming and food when living system collapse is upon us?

Our little mix group, with a chef and academic, institutional people, a practitioners and communicator, emphasied how agroecology is not just a practice, it’s a way, and way of seeing things – mimicking nature and adding societal context.

It’s a paradigm underpinned by values. And Agroecology Europe can promote this approach, without necessarily presenting prescriptive answers. Problems can be wicked and complicated, and things change over time as new knowledges emerge, or old ways are rediscovered as we try to background fossil fuel dependent farming. So social mobilizations are important, but sometimes social movements can have more answers than questions. So let’s remain open, be an ology, an approach, a practice.

Agroecology from Field to Feminism

The practice and the science can come together in field trials which are participatory and farmed-led. We learned about trials of cereal crops with perennial grasses undersowed, which offers so many positive opportunities for soil. And of some fascinating nature-mimicking involving different plant heights and predator insects.

A particularly fascinating topic was unpacked by Alessandra Trinchera on the social life of mycrorizza in soil. The ‘fungal fast lane’ refers to long distance communication and interaction below the ground. How can this be integrated into to diversified cropping systems, where agro-ecological service crops (i.e. cover crops) are introduced for managing weeds in an organic horticultural system? It turns out that Root mycorrhization was “an elective strategy used by cover crops to contain weeds, while weeds utilized the radical mycorrhization to advantageously compete with cover crops”. So clearly, more research is needed, to work out how to harness this underground network, as all the plants are already in these systems.

Move over for the movement

Recurringly, the movement stepped up too, and said remember us – all of us. Our political agroecology session was (inevitably) in a circle and covered so much.

One hot topic was a critical take on the positive story of new migrant populations in rural areas working on farms – this can of course be a really good thing, but its vital also that they are not exploited, as they are ripe for such treatment especially in the Greek context, where so many have landed in desperation.

For some intersectional is an awkward, ironically triggering word. But really, it simply means –  leave no-one behind.

In this context, the spotlight put on reproductive forces related to agriculture and agroecology by Maria Guadalupe-Rivera from the opening day’s first session is worth returning to. She emphasised that fragmenting the science-practice-movement triad in agroecology would inhibit its transformative dimension – in other words, science should not dominate to the detriment of movement and practice, and practice should not dominate movement either.

Her presentation honed in on a politics and ethics of care, of life and reproduction in all its guises, meeting production as an equal and a partner. Reproductive labour in the home, too often unpaid, underpaid and under supported, makes possible all other production.

Agroecology is supposed to put life at the centre, in all its forms, as it aims for healthy, nutritious, sustainable and just relations between people, food systems and environment. It makes visible interdependencies and diversity, it reconnects territories, making ecodependencies visible too.

Nevertheless, in an economic system that doesn’t work this way, there are forces that don’t like these questions and approaches. A dignified life, the democratisation of care, how we manage conflict and emotions, how we make decisions and eliminate (structural) violence – these are central to a fair, living world.

And from the ground up, via open pollinated seeds’ saved, to participatory plant breeding approaches, to mimicking the methods and symbioses and interconnectedness of nature, to forming social coops and building the social and solidarity economy, to collective work on making better policy, to celebrations and festivals in and around the food from field to fork – there are so many ways to work, live and play together. And yes, these are feminist, inclusive and intersectionalist ways to view and be in the world.

For Guadalupe-Rivera, there is a cognitive dissonance between the ideology and practice of agroecology. But the first step is recognition of this, and the embeddeding of respectful practices that acknowledge this gap.

This essentially ecofeminist take on agroecology could in itself be seen as perhaps essentialist, constructing a notion of the feminine that tied it to particular practices. There is however a conundrum: the work of care, from family especially but also to the mixed farming work around the home in an agroecological peasant setting, can be done by anyone. It just happens to be done mostly by women in most of the world, where these systems exist and flourish. So by valorising care, including reproductive work – from the household to the field – we place it front and centre of living systems, irrespective of whomsoever carries this, as it were, essential work out.

Last word to the first person who spoke – Ioanna Dialyna, our Greek farmer. Her back is sore, rural life is hard, but she takes solace in the fact seagulls travel way up to the plateau she farms on because they know her land has earthworms, which tells her she’s doing it right. Her family have been super-supportive, but its completely different, psychologically, going back to your home village to farm with back-to-the-future methods, when you are from the village and not a foreigner: foreigners can do wacky things, but everyone has an opinion of a returnee.

And she grows amazing strawberries, but never eats them herself. Way too much work goes into this fruit, when wealthier consumers can pay her very, very good and real money instead.

We still have a long way to go to live in a truly agroecological world, one where Ioanna can enjoy her own strawberries with abandon.

The dynamics of small and large scale farms in post-Soviet countries is fascinating. Natalia Mamonova unpacks some of the complexities and intracties in this interview. […]

Now in soggy Autumn, we return to Sinéad’s farm in West Ireland to hear about the impact of a hot, dry summer, talk mob grazing and learn about the need to farm within natural limitations. What makes her way of farming different from conventional practices? Why does she do it? Here’s an update straight from the farm. […]