Thousands of food campaigners will take to the streets of London on Saturday to remind the G8 heads of state that there is already enough food in the world to feed everyone. It is a consequence of unjust policies and priorities that one in eight women, men and children go to bed hungry every night. 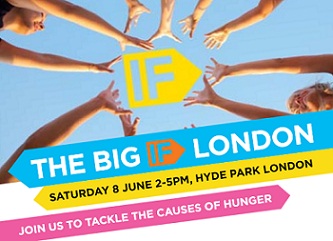 The Enough Food for Everyone IF campaign is growing and backed by more than 200 NGOs who share a commitment to lasting and sustainable change for the worlds’ food production. There is an urgent need, as Olivier De Schutter, the UN Special Rapporteur on the Right to Food recently told an IF campaign meeting to keep small farms on the agricultural policy agenda.

The simple fact is that current economic indicators understate the role of family farmers in feeding the world on their doorsteps. Policymakers simply do not understand that energy-hungry industrial agriculture simply hollows out local economies and will never be sustainable in the way that family farmers can be within local frameworks.

The IF Campaign has a number of recommendations for the G8 heads of state, in which tax transparency tops the list. A recent report by IF Campaign member Christian Aid found that a simple crackdown on corporate tax dodging and offshore tax havens would rapidly generate the USD 50 billion that the FAO estimates is needed to eliminate hunger by 2025.

The IF Campaign is also recommending a G8 commitment to support nutrition plans from countries with high levels of malnutrition. Since sustainable food production requires access to the land, the campaign is also urging the G8 to “… a new Land Transparency Initiative to support implementation of the Voluntary Guidelines on the Responsible Governance of Tenure of Land, Fisheries and Forests in the Context of National Food Security.”

Anther strand to the IF Campaign platform is urging the Hunger Summit delegates to renounce biofuels which are increasing hunger and food insecurity by using food for fuel instead of feeding people. The problem with current economic analysis is that it has no interest in measuring local food production, since this data cannot be collected as easily or as reliably as trade figures.

Budget transparency is an urgent priority on the IF Campaign agenda, which demands full budgeting transparency by the end of next year. Another urgent requirement is to: “…clearly acknowledge the impact that climate change is having on hunger and the threat it poses to food security in the future.” To make this enlightened consensus stick, the IF Campaign is also urging rigorous accountability and the involvement of “…developing countries to participate and contribute to all G8 working groups and summits/events that impact them.”

IF Campaign member Tearfund this week got breakfast time TV coverage last week, when it flew out a British 10 year-old schoolboy to Malawi, where he met and made friends with another 10 year-old, Mapangano, who regularly goes to bed hungry, but still finds the strength to walk to school every morning. Ayrton’s message to the G8 delegations was clear: “Mapangano is my friend and he suffers because of hunger. We need to change this, we need to end hunger.”

At least one person around the G8 table has already heard this message, since Ayrton’s grandfather is the UK business secretary Vince Cable, who was interviewed on the ITV Daybreak broadcast. Cable is also one of the few members of the UK cabinet to have first-hand experience of Africa, having worked as a Kenyan government economic policy adviser in the 1960s. The thousands in Hyde Park on Saturday will be arguing that it is time for food policy to transcend blinkered market economics and for the world’s self-appointed economic leaders to adopt an enlightened view of what is needed to feed the world.

The UK all-farm average business income is GBP 47000 for the year 2012-13, according to official figures released by DEFRA. However the ministry figure includes an average of GBP 25000 for Single Payment Scheme (SPS) money, which is not directly generated on any farm. So an adjusted headline figure for earnings from farming would be GBP 22000 between those working the farm: less than the average weekly earnings for an employee in a food factory (source: National Office for Statistics). DEFRA attributes the slide to a poor growing season and difficult conditions for cropping and livestock sectors alike. Higher feed costs were blamed for a 50% fall in lowland grazing incomes (average GBP 16500), while their upland counterparts in Less Favoured Areas (LFAs) suffered a 35% drop in earnings (average GBP 19500). DEFRA concedes that both categories of farming activity lost money saying they: “…failed to make a positive return from agriculture…” Yet the ministry insists on blaming the lower exchange rate for reduced CAP receipts, as if these were a direct product of farming. […]