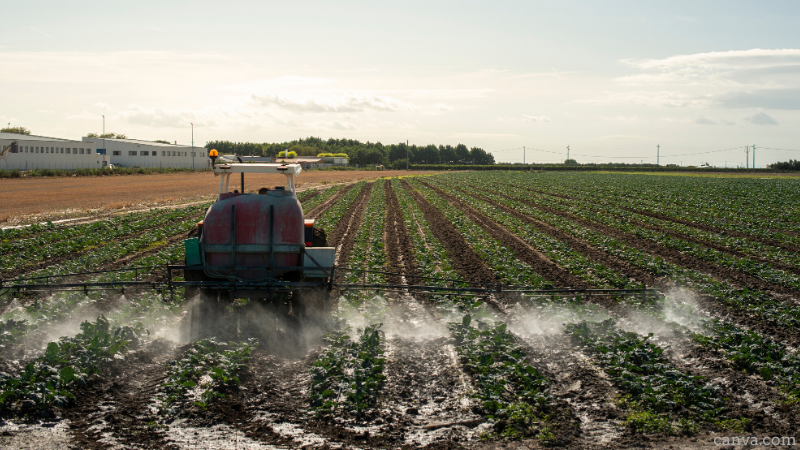 It has emerged that the SUR – Sustainable Use of Pesticides Regulation – may not be announced next week, as initially planned. Rather, on Monday 21st a decision will be made to postpose or not. This is just one example of how the EU Farm to Fork strategy is in a perfect storm: the agribusiness lobby against sustainable policies is now reinforced by war in Ukraine. Op-ed by Nina Holland, researcher at Corporate Europe Observatory. Hans van Scharen, press officer at Corporate Europe Observatory.

So here we are, on the brink of Spring 2022, witnessing a bloody war on the European continent. It is  sixty years after US scientist Rachel Carson published her groundbreaking book Silent Spring in 1962, which brought to the world’s attention the harms that pesticides such as DDT were wreaking on ecosystems. As the European Commission was expected to publish a revision of the Sustainable Use of Pesticides Directive (SUD) next week, including a long-expected pesticide reduction target, the agribusiness lobby and its political allies in conservative parties are cynically abusing the war as an excuse to get it off the table. After pressure from French minister Denormandie, big farm lobby Copa-Cogeca and the conservative group EPP, EU Agriculture commissioner Janusz Wojciechowski is expected to announce a “Communication on food security, affordable food & fair farm income”. Beter: has told MEPs that in current situation, Farm to Fork should go down the drain.

Since the announcement of the Farm to Fork and biodiversity Strategy two years ago, the pesticide industry lobby group CropLife Europe (CLE) and their allies have staged an immense and well-resourced lobby campaign against the flagship-policy of the EU: the Farm to Fork and Biodiversity strategy (both pillars of the EU Green Deal) . It is very cynical that in the past week, a growing choir of politicians both in Brussels and in member states were increasingly joining the attack on the EU Farm to Fork targets by using the Ukraine war and looming food crisis as an argument. The war shows precisely the urgency to make food production less dependent on fossil fuels, pesticides and fertilizers.

While officially embracing the EU Green Deal, CropLife organised a fierce attack on the EU’s ambition to protect ecosystems and public health by reducing pesticide risk and use by 50% by 2030.  Brussels-based lobby watchdog Corporate Europe Observatory (CEO) uncovers the toxic lobby strategies in a comprehensive report ‘A loud lobby for a silent spring: the pesticide industry’s toxic lobbying tactics against Farm to Fork’ 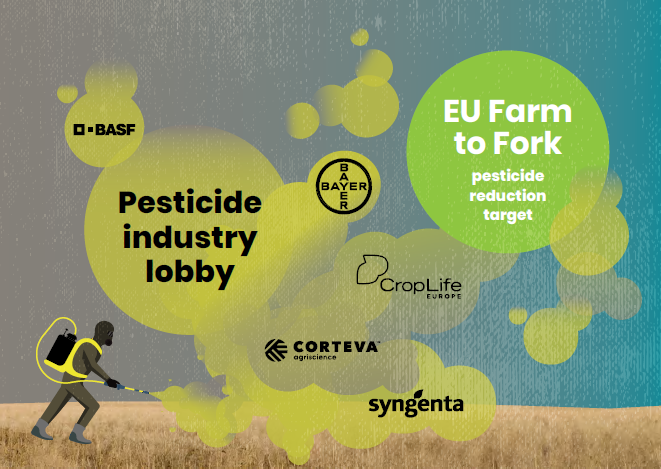 Our report is based on internal documents (obtained via Freedom of Information requests) from the European Commission, as well as a leaked, internal Croplife Europe social media strategy document, providing concrete evidence of the true objectives of this lobby group and its members, billion-euro pesticide corporations such as Bayer, BASF, Syngenta, and Corteva.

On 23 March the European Commission was expected to publish a revision of the Sustainable Use of Pesticides Directive (SUD), the first legislative proposal to put a Farm to Fork-target into EU law. Reports now suggest this will be postponed.

The current SUD already intended to vastly limit pesticide use, however EU Member States completely failed to implement it. Meanwhile evidence of the link between the use of pesticides and a decline in biodiversity and human health impacts has only piled up. The European Environmental Bureau (EEB) and 70+ other organisations, issued a joint statement on their concerns about the lack of ambition in the proposal on the “Sustainable Use of Plant Protection Products” that the European Commission intended to launch on 23 March: Joint Statement on the Revision of the Sustainable Use of Pesticides Directive (eeb.org); But for the pesticide industry the looming pesticide reduction target, was reason enough for a fierce lobby campaign against any serious greening.

The leaked CropLife-strategy confirms that while the pesticide industry makes hollow statements about its support for the EU Green Deal, in reality Croplife Europe’s overall mission is to “Protect and extend members’ freedom to operate”, and therefore has as a key objective: “no mandatory, uniform targets across EU countries”.

On the basis of the obtained documents we identified 3 main clusters of lobby tactics.

The massive lobby campaign is to protect the interests of a billion Euro pesticide-business. Global sales of pesticides have doubled in the last 20 years and the world market (estimated value:€53 billion), is in the hands of a few multinational corporations (partly controlled by a set of 5 US Investment funds and the Chinese State). According to US scholars Howard and Hendrickson up to 66% of the world sales of agrochemicals are in the hand of just four multinationals, whereas three of the same companies control half of global trade in seeds.

Of course the pesticide industry is clearly in survival mode, proposing false solutions (as in relation to climate change) and using deceptive tactics, like scaremongering European politicians with industry-sponsored research or creating international pressure by participating in a US-government-led alliance of countries and industries attacking the EU Green Deal.

The fact that European politicians are now jumping to this bandwagon is not only sad it show that just as with climate change, either they do not understand the real crisis that threatens food supply and ecological collapse, or they simply  don’t care out of the ‘business-as-usual-principle’.

If those politicians that cry foul concerning the Ukraine war , are truly concerned about food security, they would be trying hard to address the unsustainable levels of meat production and massive imports of animal feed, for instance. It is high time that European institutions and politicians change gear and stop defending corporate interests and do what they are supposed to: protect the general interest.”

Sixty Years ago Rachel Carsons’ warnings were met with fierce criticism and resistance by the pesticides industry. Chemical giants like Monsanto predicted her recommendations would bring about a world of famine and disease. Sixty years later, as the European Union’s long-awaited proposal to vastly reduce the use of pesticides is about to be published, the lobby is once again mobilising and even includes some of the same companies and tactics. But the planet cannot afford a repeat of events.

Hans van Scharen, born in Brussels, studied Journalism in The Netherlands and worked as a journalist for newspapers, magazines and television in both Belgium and the Netherlands for over 15 years. For a decade (2009-2019) he worked as parliamentary assistant to Belgian MEP Bart Staes in the European parliament, focussing a lot on agricultural and food policy related issues like pesticides, food waste, seeds and trade. Since the start of 2020 he works as media officer for the Brussels based research and campaign NGO Corporate Europe Observatory (CEO) and works as freelance journalist.

Imagine having a target to reduce pesticide use and risk by 50%, an aim to collect reliable data, the basic groundwork in place to reach it, and then working to make it far harder to actually collect the data to meet this target? Led by a group of 10 member states, the Council of Ministers has adopted a mandate for trilogue negotiations that does just this. […]

‘Plant protection products’ seen as essential, even though they are as likely to kill pollinators as pests […]