We know the industrial agricultural system is unsustainable, unhealthy and profitable for a select few. At ARC2020, we are interested in the pockets of resistance, the places where agroecological farming is thriving and alternative ways of producing and consuming food are being tried out, which are less damaging to the planet, animals and our fellow humans. We’ve found that movement to be upbeat, creative and full of good ideas. Today we hear from Saskia Richartz, from the Wir haben es satt! demo, fresh from a festival for young people involved in the agricultural transition.

Every January, we rally tens of thousands onto the streets of Berlin in the midst of winter to march for better food and farming. The Wir haben es satt! Demo kicks off the year with great company, important motivation for the months ahead.

Having demonstrated in the streets, it was now time to discuss and demonstrate our commitment to solutions, both practical and political. So we, the crew behind the January demo, brought 500 young people of the movement together to celebrate and strategise. The summer solstice festival carried the same energy as the Wir haben es satt! demo in January, but this time with enough space to get to the nitty gritty: to network, discuss and plan the agricultural transition we want to see.

The young get organising!

We have seen a massive increase in the participation of younger people in the demonstration in recent years. Urban and rural youth, organic and conventional farmers, food producers, animal welfare and environmental activists and good food campaigners. Young people across Europe are doing really great work to transition to a more sustainable food system. And all recognise the necessity of urgent action to address the climate and ecological emergencies, as well as the loss of fertile land and rural diversity.

Space to address the meaty questions

From meaty footprints to unfair trade deals, from agroecology to rural feminism and EU agriculture reforms – there is much to plough through on the journey of transition to more environmentally and socially just farming. Some twenty organisations contributed to the design and implementation of the programme.

We wanted to know: what is the role of meat consumption in sustainable food systems? What are gene-drives? Why will gigabytes and other tech-solutions not feed the world? How can we improve access to land for young and new farmers?

And what ingredients make or break a political action? Participants had lots of input on the ins-and-outs of the current food system and made full use of the time to bridge gaps and plant the seeds for collective action.

But it was not all brain work. Practical workshops from basket-weaving to making cheese, plastic-free cosmetics and compost allowed participants to work on the farm and get their hands dirty. Music, art and delicious food rounded off a programme that was both fun and informative.

Now we are energised and hungry for change.  EU agriculture policy has caused the loss of nature, diverse farming communities, soil fertility and has made us less self-sufficient in our food supply.

So we rally again!

The European action days for Good Food Good Farming will roll into their second year in October. Already we have a growing list of events scheduled across the continent to call for an end to industrial agriculture. Join us, on 22 October, when we rally in Strasbourg to call on the new Members of the European Parliament to back the accelerated transition to climate- and nature-friendly farming. It is high time that the EU restores soil-fertility and biodiversity, reduces energy- and chemical dependencies, supports and respects low-impact farming and shifts to seasonal production of fruit, vegetables and grain. 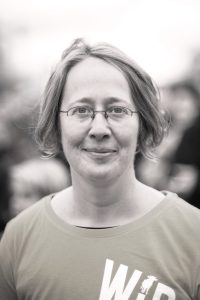 Saskia Richartz heads the campaign office of Wir haben es satt! (We are fed up!) – the German agriculture reform movement that comprises more than 50 grassroots and non-governmental organisations active on issues of agriculture, environment, nature protection, animal welfare, food activism, consumer protection and development cooperation. Wir haben es satt! is campaigning for environmentally and socially just farming and food production in Europe and beyond and is an active member of the European campaign for Good Food Good Farming and EU agricultural reforms. Prior to joining Wir haben es satt!, in 2018, Saskia spent more than 16 years in Brussels as campaigner for fair fisheries and ocean protection and then as deputy director of Greenpeace EU.

Good Food Good Farming Campaign is cooking up a storm

4 Good Food Good Farming actions you might have missed

There’s Something About Dairy – CAP, Exports and Global Milk Markets

It remains unclear how EU-member states with powerful dairy industries will take into account the interests of farming communities outside Europe. While the instruments of which the CAP is comprised focus on the primary production inside the EU, impacts are felt within countries, in Europe and further afield.  […]