With EU CAP trilogue negotiations entering a critical, final phase, the Irish Department of Agriculture, Food, and the Marine has published the results of a modelling analysis on its official website. This analysis, published in April, attempts to estimate the effects of 85% internal convergence of direct payments by 2026. While the results have been used to make strident, fear-mongering statements in the farming press, the methods used to come to these conclusions remain unclear. And the conclusions may in fact be quite different to what is being reported in the farming press in Ireland.

Modelling, but with Hidden Formulas

The Department study (available here at the bottom of the page) is over three pages, and presents the rationale, assumptions, and outputs of the modelling analysis. No information was provided on the actual formula to calculate the modelling outputs, nor explanations given on the strong implications carried by the assumptions.

It is in fact very difficult to comment on the robustness of the modelling findings and method, or the extent to which the analysis is sensitive to variables such as  the actual number of farmers in Ireland, their size, and the dynamic effects brought about by the convergence mechanism itself – for example moving money from higher to lower title values. The model appears linear and excludes many other important factors, including redistributive payments coming from capping and degressivity, to take two examples.

Although national governments can access data to run more robust modelling over a larger sample of farmers, the Irish Department of Agriculture applied this modelling exercise on three hypothetical farmers – X, Y, Z.

These three farms received different amounts of Basic Payment Schemes + Greening Unit Value (“BSP Greening UV”) in 2019, namely 160, 300, 400 EURO respectively. Internal convergence is about reducing these differences and ensuring that unit values across Ireland are at least 85% of the national average.

When the 2019 BSP Greening UV of these three farms is then compared with a situation of 85% internal convergence, starting from 2023, 2024, 2025, until 2026, for some reason this comparison is not made on the same budget basis. While the 2019 baseline of the modelling refers to BSP and Greening, the future years refer only to BISS (Basic Income Support for Sustainability). Comparing BSP + Greening UV with only BISS can indeed lead to different outputs and conclusions regarding the implications of internal convergence.

What role can eco-schemes play in the analysis of the “UV BISS” figure, at least to ensure a reasonable comparison? As eco-schemes are in pillar one (not pillar two) and are, along with enhanced conditionality, how greening is to be replaced, why does it appear that they have been left out of the analysis? Including eco-schemes in the analysis would have major implications for fully understanding the money farmers can receive – but this is not clear from the analysis.

The short document is available to download from the Department’s website but also comes with a specific disclaimer – “No part of this document may be used or reproduced without prior expressed permission in writing from the Department of Agriculture, Food and the Marine”. And yet, no contacts or references to the analysts are available, in order to clarify the nuances behind this modelling exercise and avoid misinterpretation of the findings. So, we are left in the dark as to much of the logic behind the conclusions.

It is frustrating not to have access to this basic information, from both accuracy and transparency perspectives, especially when we look at the implications being drawn from the study. 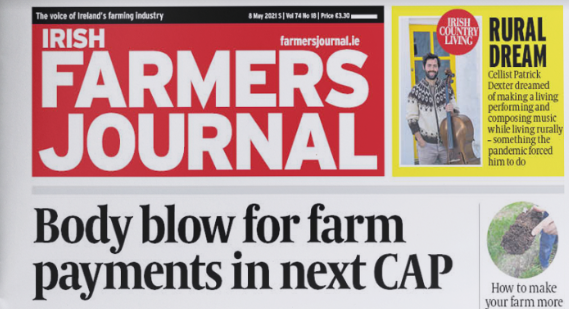 While the methodology was available only to a select few, the Irish Farmers Journal has nevertheless rung the alarm bells. Its front page this week (5th May) rails against a “body blow for farm payments in the next CAP”.

Inside it claims 54,500 farmers will face “payment wipeout”.The e-newsletter edition claims that “the gains for those on smaller entitlements will be non-existent”.

The Irish Farmers Journal uses these unclear results, from methods not publically available, to argue against any attempts to increase the level of ambition of the Irish CAP Strategic Plan when it comes to fairness in distribution of direct payments – aka internal convergence.

Its treatment of eco-schemes in its analysis is also worth noting, as eco-schemes come across as another threat for Irish farm incomes.

The e-newspaper includes ecoschemes in the standfirst (see below) as part of the financial “body blow” to farmers drawn from the Department’s analysis.

However, from the information that is available, it appears eco-schemes were not addressed in the modelling.

The print edition of the paper waits until the final paragraphs of its main analysis before bringing ecoschemes into consideration. Having listed all the losses of payments listed above earlier, under a heading referring to a “payment wipeout”, Barry Cassidy’s article then admits “all farmers will have an opportunity to access eco-schemes to increase their payments…”

Crucially, he adds: “For the 59,500 farmers with below-average entitlements, these schemes will present a further avenue to potentially increase their payments”.

This last statement suddenly put into sharp focus the figures from the Department of Agriculture. Because if farmers in the category “Farmer X” do indeed have the opportunity to “increase their payments”, and their payments in 2026 are already set to be the same as their payments now – E160 – ecoschemes mean potentially more money for these farmers. Not less money, not “non-existent” gains, more money.

Remember this is the biggest group of farmers – 59.500 – on the lowest entitlements. These are often the farmers who are also on the lowest overall incomes in more environmentally challenging terrains. So this means that the largest category of farmers will be entitled to receive higher payments than they currently receive, via a combination of basic payments and ecoschemes.

Of course, we must return to fact that there is a lack of the necessary technical information available on the modelling done in the Department of Agriculture’s document. We are relying here on what is available in that document and on the Farmers Journal’s interpretation. We are short of the necessary information to make a more robust analysis. But, if it is the case that ecoschemes do indeed represent “a further avenue to potentially increase their payments” the indications and implications are clear for the biggest group of farmers who are on the lowest entitlements. And that is not how this story is being spun.

It is also worth remembering eco-schemes are about getting paid an available top up for stronger environmental performance – which is sorely needed. And farmers on the lowest entitlements are in many cases in high nature value locations where they could be rewarded for environmental practices via ecoschemes.

And in any case, eco-schemes, which will be compulsory for the Department of Agriculture to offer,  but voluntary for farmers to take up, will most likely not be especially environmentally challenging. While it would be good to see genuine environmental actions rewarded under well-thought out eco-schemes, and this is still the hope, indications are that they will also likely include animal welfare, precision farming (a loose term which implies using equipment a little more accurately provided it doesn’t do more environmental damage) and carbon farming (another loose term that nevertheless may be attractive to the Dep of Agriculture) as options.

It is laudable that the Irish Department of Agriculture provided timely estimations of how EU decisions might affect the distribution of direct payments among Irish Farmers. In other countries in the EU, this does not always happen. To understand the implications of each policy decision, farmers, citizens and scientists will have to wait for the ‘ex ante evaluations’ accompanying the CAP Strategic Plans (Article 125 of the CAP Strategic Plan Regulation). Even then, this may be too late, as the time for discussions on the substance of the regulations and the Strategic Plans might be over.

However, considering the qualities of university departments, researchers, rural sociologists, and agri-policy experts in Ireland, it is regrettable that an important debate about the future of Irish Agricultural Policy can be influenced by unclear scientific analyses. More information on method is needed, as the assumptions drawn can be very specific and potentially misleading. There is a high risk that partial information can feed into arguments that don’t benefit farmers or the environment.

Slip Sliding Away: Where is all the Soil Going?

In this UN International Year of the Soil, let’s take a longer look at some of the myriad issues around soil […]

MEPs have a final plenary CAP vote this week – what’s at stake?

Despite the spin, after years of negotiations, the CAP that will be voted on this week in Strasbourg does little of substance to really address the crises – climate and biodiversity – and does as little as possible to address fairness. And there will be much talk of the greenest CAP ever, but this is mostly hot air unfortunately. Here we outline what’s being voted on in plenary, present related survey data from EEB/Birdlife, IFOAM EU and share the views of Sommer Ackerman of the Withdraw the CAP movement.  […]

While global issues inevitably influence milk price and dairy farmer viability, the end of the EU’s milk quota regime has made it especially challenging for small to medium sized dairy farmers to survive.  Milk prices are below 30 cents per litre in many countries. Small to medium sized producers inevitably suffer with such a sudden price drop. For some, increasing acreage and expanding production by going further into debt is the only solution. But this is only a solution for the few, while also having social, environmental and economic consequences for Europe, and rural Europe in particular. According to the Milk Market Observatory’s milk market bulletin from June 2015 “The weighted EU average farm gate milk price decreased in April 2015 by 0.8% to 31.3 c/kg, which is 18% lower than in April 2014 and 6% lower than the average of the last 5 years.” Developments in China and the Russian food embargo have also shaped the price drop. As the Western Daily Express reported on 10th June, this crisis has an impact on real people. Mark Oliver, […]