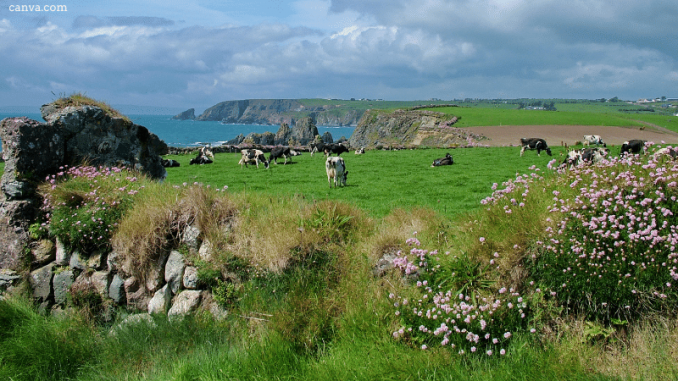 Ireland’s current agri-food strategy places environmental protection and economic competitiveness on an equal footing. But can ambitions for growth be squared with the state’s duty to protect the environment? In the first of a two-part series, Alison Brogan investigates the realities of sustainable growth on the Emerald Isle.

“[E]nvironmental protection and economic competitiveness are equal and complementary: one will not be achieved at the expense of the other” – Food Wise 2025

This is the guiding principle behind Ireland’s industry-led strategy for the agri-food sector, Food Wise 2025. Drafted by the Irish Department of Agriculture, Food and the Marine, the ten-year strategy provides a framework for future projects, and may have significant environmental implications. As such a Strategic Environmental Assessment (SEA) was required.

Part 1 of this series examines Food Wise 2025’s claim of sustainable growth in the light of the Strategic Environmental Assessment and the strategy’s projected effects on biodiversity.

Agriculture and food production is an integral part of Ireland’s society and economy. Food Wise 2025 describes it as the ‘oldest and largest indigenous industry, deeply embedded in the landscape, history and personality of the country’.

The industry has undergone significant transformation since Ireland joined the European Economic Community in 1973: it is increasingly specialised and dominated by (dairy and beef) cattle and sheep livestock production; predominantly export oriented and characterised by the “productivist paradigm”, focusing on maximising output, often through intensive practices.

The Irish agri-food sector accounts for 7.2% of national Gross Value Added, 8.4% of employment and was an important element in economic recovery after the 2008 financial crisis.

Irish agriculture is also the largest contributor to the country’s overall greenhouse gas (GHG) emissions accounting for 35.3% compared to the EU average of 9.58%.

While recognising the sustainability challenge, Food Wise 2025 advocates for more ambitious growth with an emphasis on dairy which is the most profitable sector at primary production level.

Food Wise 2025 envisages an expanding production scenario, particularly in dairy and seafood and acknowledges that this will make pre-existing environmental challenges greater ‘with increased inputs and competition for limited land and marine resources being key pressures’.

While the strategy does not set out specific proposals for expansion, it does foresee ‘a significant increase in food production’, identifies ambitious growth opportunities across all sub-sectors and specifies targets to increase value for the sector generally:

It is emphasised throughout Food Wise 2025 and its accompanying documents that the projected primary production value increase is not an endorsement of ‘unbridled’ expansion and growth of the dairy herd and milk output.

According to the SEA, the target value is to be pursued through improved market participation, product mix and farm level adoption of already available technologies and changes in the enterprise mix.

The SEA also notes: ‘where mitigation is available (the target of increasing the value of primary production by 65% is to be achieved) possibly by increases in livestock numbers’.

Biodiversity is identified in the SEA as one of the elements of Ireland’s receiving environment liable to be affected by Food Wise 2025.

While much of Ireland’s biodiversity has developed through farmland management, in protected areas the recent trend in biodiversity loss has not been arrested and agriculture remains one of the main threats to protected habitats and species.

Globally, the population of wild species has decreased by 60% over the last 40 years as a result of human activities and one million species are at risk of extinction. Agriculture poses a greater threat to biodiversity than any other human activity through its use and contamination of land and water.

While agricultural intensification is a key driver in biodiversity loss, the agri-food sector is dependent on the ecosystem services that biodiversity provides including soil productivity, pollination, pest predation and water levels and quality.

The transformation of Irish agriculture in the last five decades has seen increased intensity and specialisation of production accompanied by losses of habitats including small wetlands, species-rich grassland and hedgerows. This has had a huge impact on species dependent on extensive or mixed farming such as the corncrake, corn bunting and grey partridge, and insect populations which have also suffered significant losses.

According to Food Wise 2025, the key to sustainable production is sustainable intensification as defined below:

“(leveraging) the strengths of the sector by improving productivity while using natural resources in a manner which protects them into the future. This will require the ongoing strong commitment of the sector to adapt through embracing and applying the latest innovations, new technologies and processes” – Food Wise 2025

The SEA sets out a number of Strategic Environmental Objectives (SEOs), which are measures that the environmental impacts of the draft of Food Wise 2025 could be tested against during the policy making process.

For both of these SEOs, the indicators are the same: the condition of protected sites, uptake of AES, and maintenance of permanent pasture.

#environmental Pillar has resigned from Irish Agrifood 2030 Strategy stakeholder Committee, saying they couldn't support a 'Business as Usual' strategy. I asked @TimmermansEU if he discussed it with Agri Ministers – he said "..I tried to convince them to embrace our proposals.." pic.twitter.com/bLQAIGLP6e

Because Food Wise 2025 sets out desired value increases rather than production output or herd expansion goals, the SEA deemed that growth opportunities and innovation ‘as a result of their uncertainty’ represent only ‘a slight negative effect on biodiversity’. The SEA found that ‘broadly all other actions within Food Wise 2025 are predicted to have an imperceptible or slightly positive effect on biodiversity’ and that ‘further developments of the Origin Green programme will deliver moderately positive effects’.

There is no explicit mention of developments in biodiversity protection in Steps to Success 2016.

The Department of Agriculture, Food and the Marine’s Rural Development Programme (2014-2020) is identified as the ‘main vehicle for driving sustainable agricultural production in Ireland’. This is concerning considering the budget of the RDP compared to Pillar I. What, then, is the purpose of greening, conditionality and cross-compliance?

Biodiversity is a main focus of the Steps to Success 2018 sustainability section. It refers to a number of specific initiatives around pollinators and herbicides.

Steps to Success 2018 makes reference to a number of CAP measures that are associated with environmental sustainability. These include European Innovation Partnership (EIP) initiatives and Results-based Agricultural Environment Payments Scheme (RBAPS).

In Steps to Success 2019 the section on sustainability includes no direct reference to biodiversity.

Ag-Climatise, a roadmap which will set out the climate challenges that Irish agriculture faces and the opportunities arising therefrom, was initiated on foot of a recommendation to the HLIC from the Food Wise 2025 Environmental Sustainability Committee (ESC).

Great on farm demo day this week, training BRIDE farmers how to score their farmland habitats. Good discussion and feedback on good/poor quality hedgerows, field margins, ponds, wet grasslands and more. Thanks to @Johnfinn310 and @DOhUallachain Teagasc ecologists for their input. pic.twitter.com/Zdlvxjpw34

“imposes responsibilities on the agri-food and marine industry to develop appropriate and effective mitigation strategies to ensure that any increases in primary production can only occur having full regard to Ireland’s national and international obligations specifically in relation to: the maintenance and improvement of biodiversity; the maintenance and improvement of water quality status; and the improvement of air quality including a reduction in GHG emissions.” – Strategic Environmental Assessment (emphasis added)

This decision is translated within Food Wise 2025 to the guiding principle that ‘environmental protection and economic competitiveness will be considered equal and complimentary’ – the claim at the centre of this assessment.

To assess this claim, it is useful to look at two environmental indicators – ammonia emissions and the conservation status of protected grassland habitats – since reliable data is available. Ammonia emissions are discussed in a separate article.

So having established the context, the question remains: has there been an improvement in the conservation status of protected grassland habitats since the inception of Food Wise 2025? This indicator will be examined in part 2 of this series.

Farming as its Ferment to be? Korean Natural Farming in Ireland

Alan Matthews on the Current CAP process in Ireland

How do you get an organic farm off the ground with an agri-giant operating in the neighbouring field? Coming back to the land after a high flying career in New York City, Libor Kožnar expected the first year to be the hardest. What he didn’t expect was to find himself in a legal dispute with Agrofert, the sprawling agribusiness empire founded by the Czech prime minister. […]

Natalia Mamonova examines Ukrainian peasants’ responses to land grabs and agribusiness expansion. It discusses the post-Soviet context, forms of incorporation of the rural population in land deals, the lack of rural protests and mobilization, and the prospects for small-scale agriculture in the country. […]

We’re back on Shane Casey’s farm in the Burren, Ireland. Here, with the harvest in full swing, lambs and weanlings are being sold. In an ideal world Shane would like his meat to be consumed locally. In reality, in rural areas like his, supply outstrips demand. Shane prides himself on the quality of his meat. Working backwards from butchery to husbandry to breeding, he shares some insights into the process.  […]