Right now, the people of Ukraine are in a very tense situation. Following violent clashes between protesters and police in the nation’s capital and the removal of President Viktor Yanukovych, they have to decide which future they want for themselves. But … is it solely their decision to make? And what does the present conflict spell for the nation’s farmers? 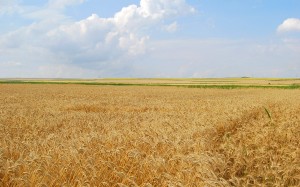 Russia and The West (mainly the US and EU) have conflicting interests and agendas regarding Ukraine. Russian troops and local pro-Russian militias have occupied and limited communication on the Crimean peninsula. The West along with the interim Ukrainian government (whom The West supports but Russia does not) is trying to find a solution that will get local militias to disband and Russian troops to return to their military base in Sevastopol or the Russian mainland.

Of particular importance is the referendum regarding the secession of Crimea. For the near future, both Russia and The West will debate the legitimacy of the result and how the process was conducted. It is very difficult to consider referendums valid where citizens are being surrounded daily by military personnel with weapons and live ammunition. But, this vote does not just concern nationhood or even independence; it’s a vote that may affect the future of Ukrainian agriculture in a major way.

There is a power struggle at play and all Ukrainians including farmers are caught in the middle. It seems that the needs and desires of Ukrainian people are being lost in media coverage. Fear of armed conflict is a daily reality for people, especially those living in Crimea. Some believe that Russia’s military exercises that occurred along the Ukrainian border might indicate that they are also planning on occupying eastern parts of the country. Russia may want to annex Crimea … and eastern Ukraine. Really, anything is possible at this point. If territorial boundaries are redrawn and Crimea or other regions become a part of the Russian Federation, farmers will experience huge changes. They would be subject to different laws that would change their lives in social, political, economic and other ways in the short and long term.

Approximately 54% of Ukraine’s territory is arable land. It is a large grain producer that cultivates a lot of wheat. There are 3 major agro-ecological zones in the country. Only one of these zones, the Steppe (Praire) Zone, includes the current conflict area. Over 90% of this zone is located in areas with sizable Russian speaking populations that also heavily supported Yanukovych in the 2010 Presidential elections. Crimea has a slightly different climate than the rest of the country. It has mild winters and sub-tropical conditions along its southern coast. It is a special region due to its developed viticulture and horticulture which includes teas, tobacco, grapes, essential oil crops, watermelons and other melons. Many people in the eastern and southern regions have publicly shown their support for Russia’s actions in Crimea at demonstrations where they chanted pro-Russian slogans and waved that nation’s flag.

The Steppe Zone makes up 40% of Ukraine’s land area. If somehow 1 out of 3 agro-ecological zones would be removed from Ukraine’s possession, it would cause enormous consequences for farmers. The Steppe Zone includes 60% of the sheep in the entire country which means that wool production would be greatly affected. The zone’s wheat production would definitely feel the pain as well. The country’s ability to establish food sovereignty would be severely diminished because the population depends on some unique products made in that zone. In addition, agricultural imports and exports connecting Ukraine and EU countries would suffer serious and far-reaching setbacks.

Ukraine’s economy is on the brink of collapse. If it crumbles, there will be high inflation and this will make it very hard to accurately price agricultural products. It has already been reported that transportation and travel has become increasingly difficult within Crimea due to military checkpoints set up throughout the peninsula. The free flow of common food staples such as milk, cheese, eggs and bread are being impeded within and on the borders of Crimea. This hurts any food seller in terms of delivery and consumer reliability. If access issues continue or get worse, supply chains will deteriorate and food producers will quickly lose profits. This affects the quantity and quality of food and consumer choice would be limited too. One cannot sufficiently describe the specific impact that social upheaval and political and military destabilization will have on the future of any country. Let’s hope for a peaceful deescalation and solution to this crisis for everyone’s sake.

Are we beginning to see carbon – the fundamental building block of all life – as a pollutant? Instead of demonising carbon as a cause of climate breakdown, we need to restore balance in the natural carbon cycle that has been disrupted by the use of artificial fertilisers. In advance of his upcoming series on farming within planetary boundaries, Stuart Meikle offers a primer on the complex role of carbon in our soils.  […]

Farming as its Ferment to be? Korean Natural Farming in Ireland

Having seen the unfolding of huge supply chain issues with Covid-19,  there is much to be said for resilient self-sufficient farmers who can make their own inputs. Traditionally, this has been practices like seed saving and compost.  Tom Stack takes it to another level. […]