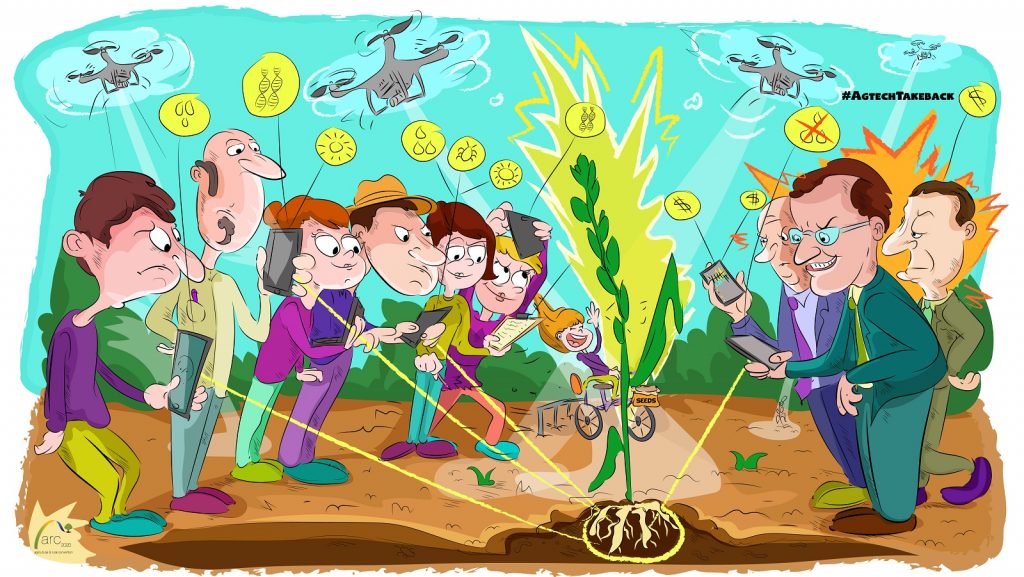 By Oliver Moore and Karen Hansen Kuhn in Ireland and the US.

Agriculture has always embraced technology. Perhaps the plough was the first, though even before then we humans harnessed nature with tools to feed ourselves.

War sped up this process of using technology for food production – spam, pesticides, mineral fertilizer, the tractor and even factory farmed chicken all came from 19th and 20th Century conflicts.

Today, digitization– the increasingly integrated use of aggregated data services and tools – is seen as part of a fourth industrial revolution which Coventry based researchers Pimbert and Anderson suggest  involves “a fusion of technologies that blurs the lines between physical, digital and biological domains”.

We’ve seen the emergence of drones, robots and AI, remote sensors and big data, penetrating ever deeper into all aspects of farming and food.

There is indeed a scary story of corporate takeover, disempowered farmers, and duped consumers. But there are also empowering and inspiring examples of farmers embracing the best, most appropriate, of technologies to grow agroecologically.

This deepening of technology into the agricultural sphere has been part of the inspiration in running this series, while the creative responses by farmers to this dynamic is part of what gives us the takeback in agtechtakeback.

Digitization is just part of a process of companies increasing control upstream and downstream in the whole food chain, sometimes called vertical integration. As Jason Davidson of Friends of the Earth US recently spotlighted, the same four mega-corporations that control seeds and pesticides (Bayer-Monsanto, DowDuPont, Syngenta-ChemChina and BASF) control more and more of digital agriculture, too.

This level, of concentration is anti-competitive, while farmer’s rights – to their own data outside of the platform, for example – are strained.

As Laura Skove points out, when advice becomes both very precise and tailored to the provided inputs and processes, other options, or other approaches, fade out of view. When a farmer takes on debt to purchase a high tech tractor, for example, all too often the farmer will enter into a path of debt dependency that emerges define the limits of the possible:

“Technology comes at a cost, and it is worth considering the impact of farm debt on farmers’ ability to innovate and to transition towards agroecological practices. Agro-industrial technologies, when adopted at the cost of medium- and long-term debt, create path dependence and lock farmers in to high-carbon practices.”

Meanwhile, who owns big data? When it comes to the mega-Corporation’s platforms, a concern is that farmers can’t access their information if they leave the platform. Not having access to information about their own fields and soil moisture suddenly puts them at a competitive disadvantage. And the specter of aggregated data being used by corporations on commodities markets is on the horizon.

Instead, as Greek agronomist Vassilis Gkisakis puts it, what generally emerges with digital agriculture is “a partial increase in the efficiency of inputs and resource use and some decrease of production costs, which are however accompanied by the high costs of farm management’s mechanization. Often these tools developed ignore main ecological processes, under whose principles the agricultural ecosystems function.”

These are inappropriate for smaller producers, and can lead to partial solutions divorced from holistic approaches to farming with(in) nature.

Knowledge-intensive, ecologically-sensitive and farmer-empowering approaches like agroecology are different. Agroecology learns from nature in general and biology in particular. In the case of weeds – plants in the wrong place – a many little hammers approach is emphasized. As the Pesticide Action Network Europe “Integrated Weed Management” publication emphasizes, there are indeed a multitude of techniques organic farmers, agroecologists and others are already employing:

“By integrating physical or mechanical, biological and ecological agricultural practices with the broad knowledge acquired on the biological and ecological characteristics of crop plants and weeds, farmers can successfully manage weeds without herbicides, while maintaining high yields, avoiding building resistance in weed species, protecting soil health and biodiversity and minimising erosion.”

Indeed bringing livestock and crops together makes sense from a whole system perspective –composted animal manures bring in excellent fertility, there are soil and climate change benefits to mixed species swards, clover reduces the need for damaging nitrogen fertilizer, while there are many more regenerative practices bring trialed by pioneers.

The block, as IPES Food’s Olivier de Schutter points out, “is not a lack of evidence holding back the agroecological alternative. It is the mismatch between its huge potential to improve outcomes across food systems, and its much smaller potential to generate profits for agribusiness firms.”

Simply put, agroecology uses knowledge and nature, not high-tech debt. And it could even work on a large scale in places as modernized as Europe.

When it comes to machinery, the time honored right-to-repair machinery by the farmer is increasingly restricted. Many farmers revel in fixing their own equipment and machinery – it’s a cost-effective, empowering and savvy way to keep the farm working. This is not always possible now, with for example proprietary technology in tractors.

Indeed, it is these very sorts of restrictions that have led to what is sometimes called the technological sovereignty, or, more simply, the farm hack movement. This is a global movement of farmers rejecting locked-away technology, sharing and tweaking their plans for building and modifying appropriate machinery for their ecological farming practices. Mixed agroecological farming requires new tools for seeding and weeding, for washing and winnowing. Farm hackers are making them – collectively.

French farm hackers L’Alterier Paysan has five trucks equipped with the machinery and materials needed to run 80 or so courses and workshops a year. Self-built farmer-led machinery is their specialty. And they throw great make-and-do parties.

Julien Reynier of the French organization explains: “We identify and document inventions and adaptations of tools, created by farmers who have not waited for ready-made solutions from experts or the industry, but have invented or tweaked their own machinery. We seek to promote these farmer-driven innovations. Our internet forum, which acts like a collective sketch-book, is designed to make these contributions visible and accessible.”

He adds: “We believe we can make technical choices and invent sophisticated low-tech solutions. We don’t want to be overwhelmed by trendy, plug-and-play and miraculous high-tech tools that will only make us more dependent, will be more intrusive and less controllable.”

Stuart Meikle’s idea of retro-innovation chimes well with this spirit. Meikle goes back to the future and uncovers a treasure trove of solutions as proffered in the 1950s, from Friend Sykes in particular, with his knowledge then of mycorrhiza, the harm done to these by artificial fertilizers, and the benefits of mixed swards for soil structure.

There is much to learn from the forgotten books of the pre-mineral fertilizer era, when ‘humus farming’ was that day’s version of biological or regenerative farming.

Farmer-led innovation, soil-aware, regenerative innovation  – is where this slippery term must be housed if it’s to benefit people and planet, and not just corporate forces: indeed concerns have been expressed that, when it comes to Research and Development in agri-food, innovation is being used simply a cover phrase for business-as-usual.

Big isn’t always bad though. Even at a higher tech level, citizen science initiatives can use aggregated data for positive purposes, often incorporating smartphones. Fair chain is one example of the much hyped blockchain where value and roasting infrastructure is shifted back to the coffee producers. And it’s worth noting the overlap between the FOSS  – free, open source software – movement and the farm hack movement and, more specifically the US Open Source Seed Initiative, with its 400 pledged seed varieties, or the German Open Source Seeds movement, which is copyleft and includes derivatives. In each of these cases, it is farmers and local communities — not agribusinesses — who control the rights to and the use of that data.

In addition to who controls the data, as food rights campaigners FIAN International point out, it’s also important to be aware of the power dynamics behind how food becomes immaterial  – how elements are extracted from their natural and human, peasant farming core: “separated from the microorganisms, plants and animals that they stem from, and indeed they are further isolated away from the persons who provided all related knowledge.”

Some learnings that have emerged from the series:

This new frontier of food, where digitization and technology pervade, is still a contested space. Let’s push for technologies, from open plans to open pollinated seeds, from accessing your own data to modifying your own machinery, that work for everyone.

Full series is below!

A Just and Green CAP and Trade Policy in and Beyond the EU: Part 1

Why has the CAP been historically problematic for farmers’ economic sustainability, biodiversity and the environment, in the EU and the Global South? We explore historical choices regarding trade and CAP that led our agriculture towards liberalisation, highlight the consequences and propose some changes that could start a shift away from a market-oriented agriculture […]