We are back in Greece on Mazi Farm with Natasha Foote who talks us through the thinking behind the farm design. From the selection of crop varieties to the layout of the farm, it all comes down to observing nature and mimicking natural processes.

Walking around Mazi farm, between a mix of trees and plants of all shapes and sizes, from pomegranates, to grapes, to eucalyptus, it becomes quickly apparent that this way of doing things is a far cry from the miles of monoculture crops we’ve come to associate with conventional farms. You’d be forgiven for wondering how this seemingly chaotic system came into place, but there is method in the madness! And it’s this farm design that I want to talk about here for you today.

Mazi Farm is what we would call a successional stratified agroforestry farm, rooted in the principles of ecology and inspired by syntropic agriculture, a concept pioneered by Ernst Gotch through his farm in Brazil.

Everything we try to do on the farm is inspired by natural processes, focusing on mimicking natural patterns found in forest systems. When looking for inspiration for how to create our food systems, forests, which produce an abundance of wood and fruits without the need for any human input, are the logical place to start.

So, the first question when designing any farm is, which varieties should we be growing? Agroforstry and permaculture teacher Mark Shepard advocates for the careful study of your local biome and then drawing up your farm design based on the species you find there. We headed off to our local forest to identify the wild flora and fauna growing successfully around us and used them to inspire our crop choices.  This means trying to see the plants in your system not just as an individual species but as embedded in a system in which it plays a specific role.

We found wild pistachio and almonds thriving on the side of the mountain nearby which has only meagre layer of soil, bountiful fig trees which lined the sides of the roads and prickly pears which give an abundance of pears with nearly no water. The cultivated varieties of these we selected for the farm.

Of course, in an ideal world, the ecology alone would provide the design of our farm, but this ecological ideal also has to be weighed against specific contextual and economic factors. For instance, being far from the nearest city , and it therefore being difficult to sell fresh produce, means that we have focused on species that have the ability to be easily dried and transformed for ease of storage and transport, as well as making ecological sense. We also concentrated on high value crops to make sure our farm is both ecologically and economically viable. Weighing these variables up, we chose pistachios, figs, almonds, prickly pears and pomegranates as our main crops.

Where to put them?

So then question becomes, how best to organise these species in your system? For that, it is important to delve deeper into the ways that that forests are so successful, and draw inspiration from the natural patterns and processes we can observe there.

The first of these is the process of ecological succession. Forest systems are not static environments but are constantly evolving and changing. Each species sets the stage for the next as the system becomes increasingly complex and efficient until a so-called climax community is reached. This is when the vegetation in a given area reaches an equilibrium, consisting of species best adapted to the average conditions of that area.

The idea for us is to help speed up this ecological succession that would occur naturally over time, accelerating the process towards a more stable, fertile, healthy ecosystem. For this, we included a mix of pioneer and early successional species with later successional species, designing a system that constantly evolves through time in the same way a forest does. This means that our species all have different temporalities, with some designed to last just a few years and some designed for more long term production.

We also employed the concept of synchronicity. This is the idea that when a disturbance happens, all the system components are there ready to go, and ready to come into their own when their time is right, with seeds dormant in the seed bank reacting and tree stumps re-growing. This is crucial for establishing the whole network of species together in the space, allowing networks of communication to be established. This means that we planted out all (or as many as we could!) of our species all the same time, to allow the system to evolve together.

The second is process that is key to design organisation is stratification, i.e. that plants come in all shapes at sizes. For instance, in a forest system you will find a ‘full consortia’ of species (species at all levels and life cycles), from the top of the canopies towering above the others (‘emergent species’), to the sub-canopy thriving in their shadow (‘high-medium species’), to the vines winding down the trees, to the ground cover plants under your feet.

Imitating stratification is important for several reasons. One is that it is a key part of understanding the niche in which your species flourish best. For instance, taking a sub-canopy, low-level species, such as a pistachio, and putting it in direct sunlight will stress and burn the tree, especially in a climate like Greece. This will weaken the plant, and make it more susceptible to disease and other problems. Another reason strata is so important from a farming perspective is that organising your farm by strata maximises the amount of photosynthetic energy you can harvest, or the maximising the capacity of your crops to use sunlight to produce the nutrients they need to grow. By doing so, you are increasing the productivity of your system, producing calories at all light levels rather than on just one plane, as in a monoculture.

This stratification can take many forms. At Mazi, we have chosen to diversify our species along our tree lines, with each line a mix of different strata of species. It means that we have poplars as our emergent species, towering over the other lower level species. Underneath, protected in their shade, we have our figs, followed by our pistachios, our bushier pomegranates, our grapes (which will grow up neighbouring trees), our prickly pears and our green manure ground cover crops.

Another process that we seek to emulate on Mazi is the process of disturbance. In natural systems, there are constantly disturbances, such as a fire, an animal breaking a branch or a tree falling in a strong wind. These disturbances play a key role in the health of a natural system, keeping the system dynamic by unlocking key nutrients and opening niches for other species.

We can emulate these disturbances on our farms by using our chainsaw as a tool for disturbance. By pruning and tree thinning at strategic times and in an ecologically sensitive way, we can open up space on our land, and provide organic matter for the rest of the system to use in the form of wood chips from branches and trees.

Opening up space on our land also means that we can fill these gaps full of ground cover annuals, using a mix of plants we call ‘green manures’, emulating the strong pasture annuals which are the first to respond after disturbance in a forest system. These green manures are a mix of nitrogen-fixing plants such as lupin and vetch, and other crops which spread over the ground to help reduce soil erosion and speed up the natural succession of the system.

By mimicking these natural processes, re-establishing biological processes in the ecosystem and the soil, facilitating natural nutrient cycles and increasing the structure and fertility of the soil itself, we hope to create highly nutritious, quality food from a system which requires minimal inputs. 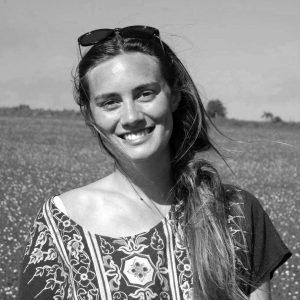 Natasha is currently working on Mazi Farm, an agroforestry project in Greece, where she researches innovative biological techniques and runs their blog in between helping on the farm. She has previously worked with the Pesticide Action Network UK and the Fermes d’Avenir agroecology tour of France before she decided to get stuck into some practical farming experience.

About Natasha Foote 10 Articles
Natasha is currently working as an agrifood and health journalist for the EU media, EURACTIV, where she focuses on EU policy and how this links with issues on the ground. Previously, she worked on a mixed organic farm in the south of France and prior to that Mazi Farm, an agroforestry project in Greece. She holds a BSc in Biological Sciences from the University of Bristol and an MA in Environment, Development and Policy from the University of Sussex, where she worked on food issues and alternative approaches to food production.

How a Nitrogen Crisis Turned Dutch Farmers to Rage

This autumn, Dutch farmers brought the Netherlands to a standstill after it became clear they would be hit hard for the nitrogen crisis the country is facing. As protests intensified, politicians were unable to offer any real solutions. Our Dutch correspondent Hans Wetzels has more, in this first of a two parter. […]

We’re back on Chiara’s mushroom farm at the foot of the Italian Alps, where forest farm life goes on regardless of the lockdown. She is determined to get her on-farm processing facility up and running for this season. During the Covid-19 crisis she’s been even more socially isolated than usual, giving her time to muse on the deeper meanings of the “ford”: the site of her farm, but also a metaphor for agroforesty and agroecology. […]