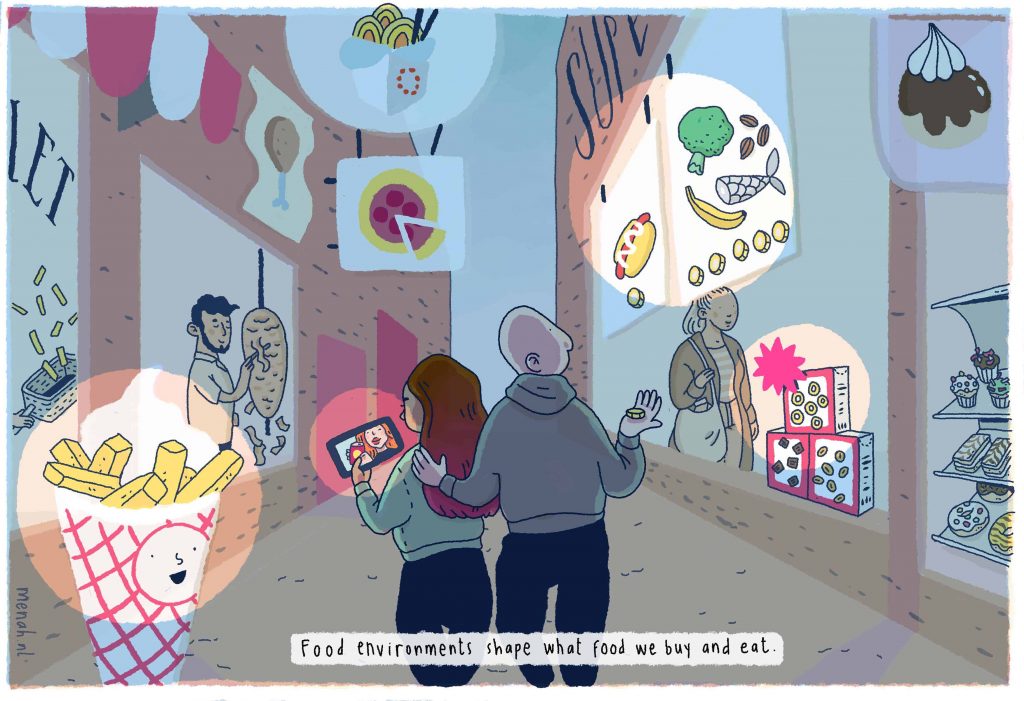 Food environments are essential to address a newly identified opportunity in the journey to a greener Europe. But what are they? Food environments are the subtle influences on our daily food choices: everything from the billboard you see as you walk your children to school, to how groceries are laid out in your local shop, or how food is labelled.

The EU’s own chief scientists highlight the need to improve food environments – it is no longer enough to focus on ‘consumer choice’ and individual responsibility when subconscious influences all around us shape what we eat. The EU’s Farm to Fork Strategy wants to make it “easier to choose healthy and sustainable diets”. To enable this, we need policies which adjust food environments to face the interlinked health and planetary crises. And it’s not enough to rely on companies taking voluntary measures – such as reformulating foods to make them less sugary -: to tackle the problem across the board and prevent unfairness, enforcement mechanisms will be crucial.

There is ample evidence that food environments can drive unhealthy consumption, and many European cities are starting to tackle “obesogenic environments” considered a driving force behind the escalating obesity epidemic. Removing ultra-processed sweets from checkout lines, restricting advertising to children, and imposing taxes on sweetened beverages are examples shown by evidence to be effective interventions to support healthier diets.

But what about the tomatoes picked by undocumented migrants working under exploitative conditions, or chicken filets from hens raised in cages with no space to spread their wings? Our food system makes us unhealthy, but it is also damaging to people and planet: nearly a third of global greenhouse gases are linked to food production or consumption. To defend their supply chains, companies often tell us they’re only giving customers what they want. Evidence on food environments shows the picture is not that simple: powerful corporate interests in the supply chain are both shaping demand, and profiting from delivering it. Too often it is our health, the environment, the welfare of animals, and workers or small-scale producers which pay the price.

Today, 24 Food Policy Coalition participants working across the animal welfare, public health, city networks, environmental, labour rights, and fisheries sectors have published a call to action to improve food environments in the EU with the aim of making the scope of food environments better understood, and providing key entry points for policy. Now is the time for the EU to take advantage of the opportunity of the Farm to Fork Strategy to drive action to make sure that the foods that are most available, accessible, affordable, pleasurable and widely promoted, are those that are truly sustainable.

Supermarkets play a critical role in shaping food environments. Research conducted by Feedback shows how they influence consumer choices with the promotion of cheap meat, which is leading to over-purchase of meat and dairy products contributing to climate change. It is difficult for shoppers to make these changes alone. Although a survey of the European Consumer Organisation (BEUC) shows that 45% of the consumers in 11 EU countries are willing to eat more plant-based food, and more meat alternatives are eaten in the EU, meat consumption is not declining. Supermarkets must change the way they sell food and shape the food environment. They can do this by changing store layouts, stopping routine promotions on meat and dairy products, and supporting people to buy healthy plant-based food with incentives. The EU can also help drive these changes by enacting policies to restrict marketing for unhealthy and unsustainable food for example.

Focusing on promoting ‘responsible consumer choices’ is truly missing the point, when, in addition to the powerful effects of price and marketing, it remains nearly impossible for consumers to be sure that their fruit and vegetables are not picked by exploited migrant workers. Research by OSEPI shows the labour exploitation in agriculture is prevalent across Europe, and that price pressure from powerful industry, large retailers and international buying groups is a driving factor to a low-wage, flexible and exploitable migrant labour force in agri-food production. Consumers are misled by greenwashing labels, slogans and images of smiling farmers, but the reality is it is way too complicated to be able to know under which conditions our food is being produced.  Until our long supply chains become fully transparent, alternative distribution systems based on trust such as Community Supported Agriculture, and direct selling between producers and consumers, remain the best way to promote healthy food, produced in a way that preserves biodiversity, ensures that small-scale food producers have adequate support, and that workers also benefit from adequate labour conditions. Models such as CSAs have blossomed in the bleakest moments of the pandemic, showing the inherent resilience of people coming together as communities. These communities are here to stay, and the EU should support such models which have proved to deliver on all fronts of sustainability, and make them more widely available, accessible, and affordable.

Acting proactively to change food environments is nothing new: businesses have been shaping food environments for decades – and so have governments at all levels. To address the role of food environments in achieving health and sustainability goals we need to actively engage with them, including through policy on procurement, advertising and pricing, as well related issues such as import standards. An obvious move would be to ensure that public money is only spent on promoting food, which delivers against sustainability, fairness, and health goals. Members of the European Parliament must now uphold the ambition of the Farm to Fork Strategy, which the Food Policy Coalition will continue to support. This includes not backing down on the need to improve food environments: without this action, many of the goals of the strategy will remain wishful thinking, with long-term implications for the EU’s wider environment, health and animal welfare priorities.

The EU finally has the makings of a sustainable food policy – why is it under attack?

Should Agricultural Subsidies Go To Labour Not Land? | Report Extract