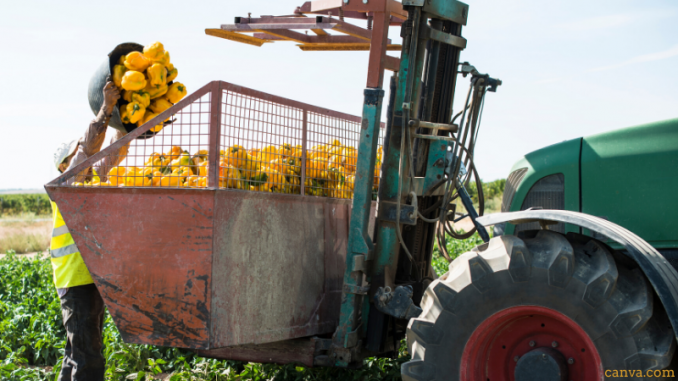 In the Netherlands cheap food comes at a high cost to migrant workers from Central and Eastern Europe, especially in the labour-intensive horticulture sector. EU enlargement has opened the door to an erosion of labour rights guarantees, report Karin Astrid Siegmann and Tyler Williams.

The high productivity of Dutch agriculture goes hand in hand with high risks for migrant farmworkers. The Dutch Labour Inspectorate (Inspectie Sociale Zaken en Werkgelegenheid, ISZW) considers agriculture in the world’s second largest agricultural exporter one of the top risk sectors for unfair work. In Dutch agriculture, “a flexible contract with a low wage and little certainty is the rule rather than the exception and employment agencies, contracting and payrolling are also widely used” as a result of efforts by growers “to keep prices low by reducing labour costs with all kinds of mechanisms to below the legally required minimum or collective wage.” Consequently, many migrant farmworkers in this rich country experience working poverty. Migrant workers from Central and Eastern Europe (CEE) form the bulk of the agricultural labour force. About a fifth of them work at or below the minimum wage, earning an average of ten euros an hour, half the wage of other European workers employed in the Netherlands.

1. The impacts of migration and asylum policies

While undocumented migrants represented an important pillar in the Netherlands’ greenhouse economy during the 1980s and 1990s, since the turn of the millennium regular CEE migrants have taken over their role. Only a small number of the workers supported by FairWork are undocumented migrants. A 1998 Linkage Act excluded undocumented migrants from welfare state entitlements and connected immigration and social policy-related databases. Due to this connection, undocumented workers try to remain below the radar even in cases of severe labour rights violations. Since that period, restrictive border policies have been complemented with internal migration control and expulsion policies to reduce the number of migrants already in the country.

There remains a “single permit” combining a work visa and residence permit for seasonal agricultural work (up to 24 weeks) for which an employer or candidate can apply. However, administrative hurdles and associated costs combined with the continued availability of CEE labour currently make this process a less attractive option for growers.

As for asylum seekers’ access to employment, they have no right to work during the 6-month decision period after an asylum claim. Assuming the decision period is extended, the applicants may then undertake an internship. They may also search for a job, but their employer will have to apply for a work permit for them and their earnings will be capped. These restrictions probably explain the lack of evidence of asylum seekers being employed in Dutch agriculture and other sectors.

EU enlargement has been accompanied by measures that facilitate an erosion of labour rights guarantees. Legislation such as the Posted Workers Directive, the Services Directive and the Social Security Regulation “allow for the posting of employees who were hired in one member state to work in another member state with the social protection and wages of the sending country, unless specifically regulated by the destination country.”

Even if national labour rights guarantees are not undermined by such mechanisms, the flexibilisation of the Dutch labour market increases the risk of labour exploitation. The multiplicity of legally sanctioned working relationships, the emphasis on fostering entrepreneurship and the possibility of turbo-liquidation create opportunities for fleeting entrepreneurship and the low chance of being apprehended creates the space for unfair contractual relations to flourish.

Currently, only an estimated 3.5% of companies are being monitored annually by the Labour Inspectorate due to a decrease in funding and the resulting limited capacity. In 2018, the Inspectorate aimed to monitor merely 1 % of all companies where unfair labour practices are a potential risk. All of this can have severe consequences for workers. A union representative offered the example of a group of seasonal Polish workers who reported burns suffered while handling chemical substances during their work to the ISZW. The Inspectorate finally reacted after three months, but the affected workers had already returned to Poland.

While inspectors themselves insist that no advance notice is provided to employers, representatives from Federatie Nederlandse Vakbeweging – FNV, the largest Dutch trade union, have shared examples of growers being alerted beforehand and therefore preparing for inspections, with workers being briefed. Private conversations with workers are essential but do not seem to take place regularly, especially due to widespread language barriers. These barriers also mean migrant workers are often unaware of grievance procedures to claim their rights. If they are aware of the procedures they often refrain from using them because they are cumbersome and costly.

A system of public licensing of recruitment agencies was abolished in 1998 and replaced in 2004 with industry self-regulation through certification. However, the shares of labour rights violations do not differ significantly between registered and non-registered agencies. The industry’s selfgovernance therefore seems ineffective.

The Dutch government has taken steps to curtail abuses in subcontracting, including a 2010 law that enables employees to recover wages from their indirect employer in the event that the agency does not pay, with the key exception of certified agencies. The implicit assumption is that certified agencies do not exploit their workers, although this is not always the case, as shown above. Subcontractors can also avoid liability by further subcontracting recruitment to a non-certified (sometimes foreign) subsidiary.

In this situation, Dutch civil society appear not to be vocal about unfair labour practices in agriculture. The rights of farmworkers in the Netherlands are generally not taken up by a labour movement that has not yet effectively reached migrant workers or by environmental groups pushing for alternative food systems.

3. The EU CAP and national agricultural and rural policies

EU CAP direct support payments to producers in the Netherlands have concentrated on dairy and beef production and have enabled farmers to invest in labour-saving technologies. Horticulture, in contrast, has hardly been touched by the CAP. As a result, the sector has remained the most labourintensive part of Dutch agriculture.

EU market support payments have been negligible in recent years. At national level, policies have aimed to promote sustainability and the quality of agricultural production.

Some of the interviewees have argued that resistance against exploitative practices in agriculture must be initiated by workers themselves. First and foremost, this requires efforts to strengthen migrant workers’ associational power, i.e. “the various forms of power that result from the formation of collective organisations of workers.”

In the context of Dutch trade unions’ traditional focus on “tripartite bargaining in order to develop collective and social rights and institutional regulation,” the emerging new forms of outreach to migrant workers through fellow CEE citizens are promising. Rather than organising outreach activities for migrant workers by sector, the trade union FNV has started organising regional events on issues such as occupational safety and health in the Southern provinces of North Brabant and Limburg where open field horticulture is concentrated. Interested workers are trained as shop stewards in order to enable them to inform their colleagues about their rights and entitlements in their own languages. Such organising through cultural mediators has proven to be an effective way to take workers’ social identities – beyond class – on board in union outreach.

The bulk of unfair practices that affect CEE migrant farmworkers in the Netherlands can be defined as “regulated precariousness” embedded in migrant workers’ high degree of dependency on their employers and shaped by skewed power relations in the agri-food chain.

The strengthening of migrant farmworkers’ associational power through new forms of awareness-raising and organising is a crucial stepping stone to counter unfair labour practices. Given the limited outreach to CEE migrant workers by Dutch trade unions, trusted migrant organisations have an important role to play. In addition, municipalities could provide information during migrant registration.

Awareness-raising and organising must be complemented through strengthening ‘institutional power,’ defined as workers’ capacity “to influence the behaviour of an employer by invoking the formal or informal rules that structure their relationship and interactions.” The effective implementation of existing labour rights guarantees requires more rigorous enforcement by labour inspection, including an increase in the resources of the Labour Inspectorate. Its approach requires reorientation towards workers as the ISZW’s most important stakeholders. Institutional innovation in the form of a streamlined civil procedure to recover unpaid wages, overtime and holiday pay, and the reintroduction of recruitment agency licensing would be further important steps towards fair labour conditions for migrant farmworkers.

While these proposed changes harbour a potential for short- and medium-term improvements, they do not yet challenge the neoliberal European market model with its focus on facilitating companies’ profitseeking and labour-cost reduction. Institutional innovation to guarantee fair prices for producers, e.g. through the regulation of living price benchmarks and living wages for farmworkers would represent key building blocks for humanising the agri-food chain in the Netherlands.

This is an excerpt from The Netherlands chapter of the report “Are Agri-Food Workers Only Exploited in Southern Europe? Case Studies on Migrant Labour in Germany, The Netherlands, and Sweden” by Open Society Foundations. The full report is available to download here.

What are the implications of the new Brexit plan on UK and EU food and farming? In this second part, Sharon Treat from the Institute for Agriculture and Trade Policy (IATP) talks us through inadequate environmental and animal welfare protection as well as weakened biotechnology regulations.  […]

CAP | Time for Commission to Get Real on Spending, Say Auditors

The EU spends a lot on CAP – almost 40% of its annual budget. But are these billions of euros delivering results? In a new report, the European Court of Auditors find the Commission is “overly optimistic” on the performance of CAP spending and needs to focus on the real impacts. It also confirms that 80% of direct payments are going to 20% of beneficiaries. Louise Kelleher reports. […]