Welcome to Ciasnocha Family Farm – a 730 ha regenerative grassland farm in the Vistula delta of northern Poland. In his first Letter From The Farm, Mateusz Ciasnocha walks us through what’s involved throughout the year on his farm. But first, Mateusz gives us a whistlestop tour of the farm’s history over three generations, from Communism to CAP, and the transition to regenerative agriculture. 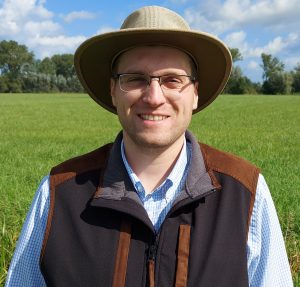 Welcome to Ciasnocha Family Farm – a 730 ha regenerative grassland farm owned and operated by the Ciasnocha family located in the Żuławy Wiślane Region of Poland!

We have been farming in the Vistula Delta, one of the most fertile agricultural regions in the country, since the 1970s.

In 1973 my grandfather moved from south-eastern Poland after selling his farm of 4 ha in order to start farming in the north, where he bought 14 ha.

The business is run by the second generation of the family – Marian, Sabina and Mirosław – with significant help from the third generation: Mateusz, Paweł, Krzysztof and Magdalena.

Currently the farm is a regenerative permanent grassland operation focused on production of the highest quality hay.

It delivers higher economic and environmental results than previous ways of operating the same farmland. Some of those dimensions are:

Between the 1970s and today, the farm has gone through four major stages of development.

From the beginning production was focused on animals – dairy, swine and sheep were all part of the farm operations. During this stage of development the farm grew from 14 to 30 ha. In the later stage of the farm’s focus on producing animals, the farm specialized in producing piglets, but the scale of production was low, as only a maximum of 10 sows were owned.

Due to increasing farm area – 55 ha in 1995 and 120 ha in 2000 – the animal production on the farm was discontinued. The crops produced were mainly wheat and rapeseed with some beans for maintaining soil health and rotation. However, at this stage, the farm was still operating in a conventional production mode with a plough-based cultivation model.

We started in 2004 with a certain profile of operation, which was economically and technically viable for us back then.

Significant changes to the way the farm was operated were made possible after the Polish accession to the EU in 2004. With this Polish farmers became bound by the Common Agricultural Policy (CAP) with all its pros and cons.

In the case of our family farm, the CAP turned out to be a blessing, as we took the risk of enrolling in the agricultural-environmental-climate programs, which encouraged us to change our production model. We changed from being heavily dependent on deep tillage and planting mainly winter crops to regenerative agriculture 1.0 in which we started producing spring crops only with massively reduced tillage and introduction of cover crops (mustard in our case).

This change of practice allowed us to farm in a way which was better aligned with the cycles of nature, the carbon cycle in particular. The result of aligning our way of working with the way nature works was better profit and loss.

Given those operational changes, we entered into the business of baling and trading straw. At the end of this stage, the farm size grew to 420 ha.

This transition continued because of our increasing understanding of the cycles of nature: grasslands were the historical land-use form in our ecosystem and so coming back to the natural habitat meant we are more regenerative than we would otherwise have been.

The highest quality hay – which is a mix of hybrid ryegrass, orchard grass, meadow fescue and timothy – is sold domestically and internationally as animal feed for horses and dairy cows, as well as a feedstock for paper production. We cut our grass twice per year – in the second part of June and in the second part of August – with the first cut yielding 5t/ha and the second cut 2t/ha on average.

Our land has not been tilled since 2008 nor have we used any chemicals on our land since then. The majority of our hay production is exported, namely to Germany. Other markets to which we have exported our hay in the past include Sweden, Norway, the Netherlands, Austria and Switzerland. We have also explored opportunities of exporting hay into the Middle East – namely the United Arab Emirates – and the Far East – namely Japan – as well as Canada.

Yes, hay leaves our farm and with it the associated carbon. However, we regularly re-seed our grassland (approximately every three years) and new roots are being created in the soil. Hence the increasing soil organic content of our soils.

Also, let’s not forget that the carbon locked up in our hay is not carbon that we somehow mined from the ground – it is carbon which was in the atmosphere and through photosynthesis our grassland captured it, putting some into the soil and some into the hay we export from the farm.

A year on the farm

With a few photos, we would like to take you on a quick journey through our process over the year.

Our farm work starts in spring with trawling (pictured above)– a process aimed at levelling molehills and encouraging grass growth. Simultaneously with trawling we apply 50 kgs/ha of urea, which is the only synthetic input we use on the farm.

Our harvest process starts with cutting the grass using a triple mover combination with conditioners – a special rollers mounded in the mover, which help with the drying process of grass. 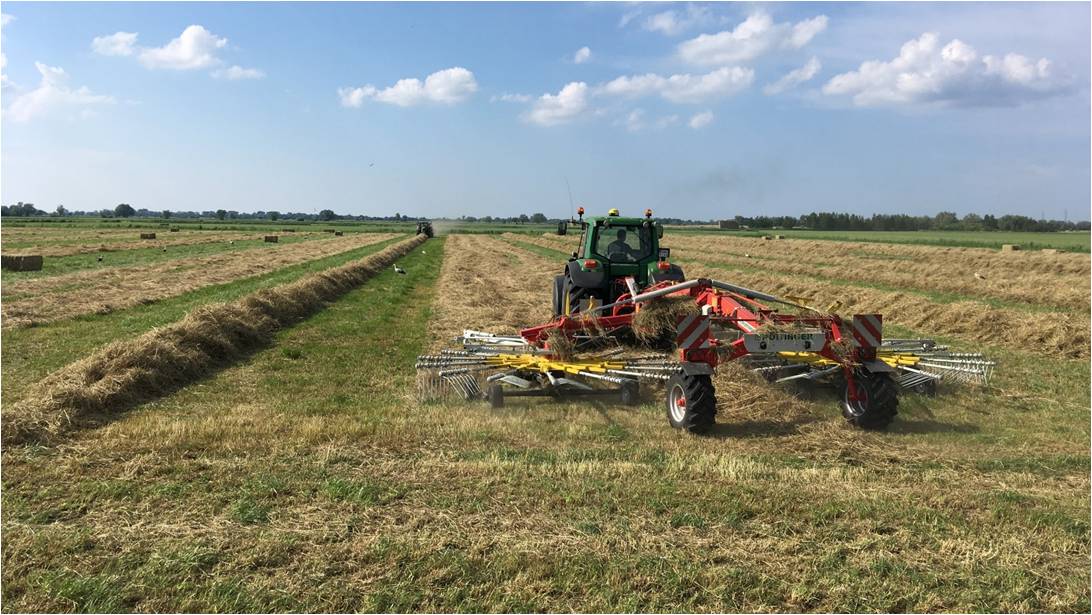 Windrowing: this happens within a day or two of tedding

After waiting for between four to ten days – depending on the weather conditions and the size of grass – for the grass to dry, we ted it in order to finish the process of drying the grass and also ensure the drying is even.

Soon after tedding – either on the same day, or the next day – we windrow our hay.

And soon after that the hay is baled. One of the key success factors of our operation is applying a special preservative to the hay, which prevents it from developing mold.

As soon as the hay is baled, our logistics process starts. With a special trailer we collect, transport and stack hay either on the edge of the field, or on the farm.

Our hay is stored in buildings, where we can store approximately 1500 tons of hay.

And under plastic wrap as shown below.

As we have just finished our trawling in 2021, we are looking forward to our first cut of hay in June.

While going through the seasons, we are looking forward to sharing our work in the future editions of the Letter from the Farm. Stay tuned!

Mateusz Ciasnocha is a third-generation farmer operating a 700ha regenerative agricultural business in northern Poland on a mission of transitioning agriculture from conventional to regenerative with farmers at the centre at the pace and scale required to unleash the world’s greatest carbon capture and storage pool: healthy and living agricultural soil.

Building on his background, global experiences and networks, as well as commitment to regenerative agriculture, Mateusz – together with his brother, Paweł – set up European Carbon Farmers: a business promoting carbon farming practices in Poland and developing agricultural carbon payment mechanisms.

Mateusz is actively involved in the work of the UNFCCC’s COP26 – Climate Champions, where he is the Regenerative Agriculture Fellow, the Economy of Francesco’s Agriculture and Justice Village, where he co-facilitates work of the Startup Stream focused on developing a network of regenerative demo farms, as well as EIT Food, where he manages the regenerative agriculture program in Poland.

As a major agricultural nation in the east, Poland has a significant interest in how CAP will unfold in the current reform process. While not all regions or sectors are the same in this large country, there are some common considerations. We have commissioned journalist Hans Wetzels to get to grips with CAP and Poland, Part 2. […]