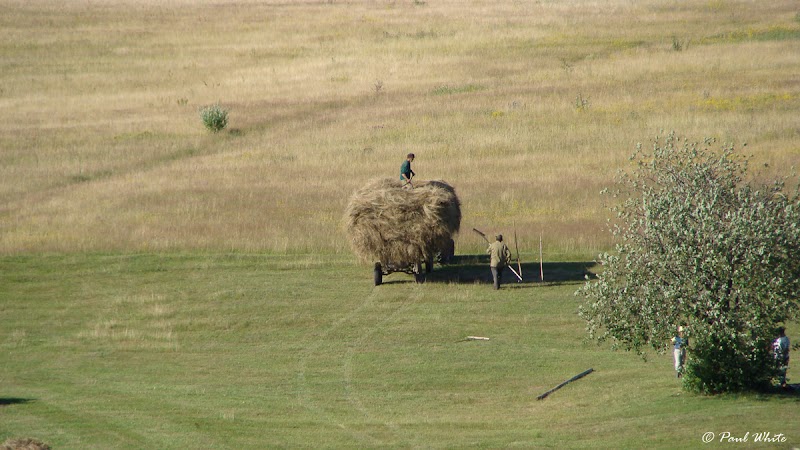 In Transylvania’s hay meadows people continue to farm in harmony with nature. Determined to capture the traditional skill of scything on camera, photographer Paul White found out he would have to get up very early in the morning. Here he documents the hard work involved in a traditional haymaking process that is clean, sustainable and yields enormous benefits for biodiversity. Photo essay by Paul White. 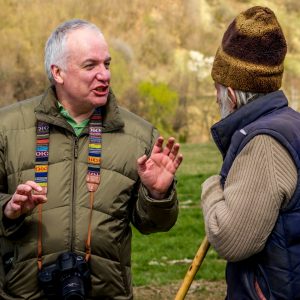 Why hay and why is it associated with rich biodiversity?

I don’t know if you have heard the term ‘from hay meadow to table’? Hay is produced from grass to make animal fodder, which is consumed to produce meat, milk and cheese for the family table. These vast meadows in Transylvania are pesticide and herbicide free, sequester huge amounts of carbon and make up some of the most biodiverse ecosystems in Europe. What’s more, the manure produced by livestock that eat this hay is used to fertilise the same meadows which maintains a nutrient rich cycle.

However, it is only because of man’s constant intervention that this cycle is maintained, with annual fertilising and bi-annual cutting. In areas of land abandonment this biodiversity is soon lost.

There are also other positive benefits from these flower rich meadows, such as attracting a wide range of insects which also pollinate local crops, honey production and the abundance of herbs that also find their way to the table.

Meadows attract insects which in turn attract reptiles, amphibians, birds and mammals. This is one of the primary reasons why so many white storks migrate to Transylvanian villages all the way from Africa. They nest in large nests on top of lampposts and feed their young from what they find on local meadows. 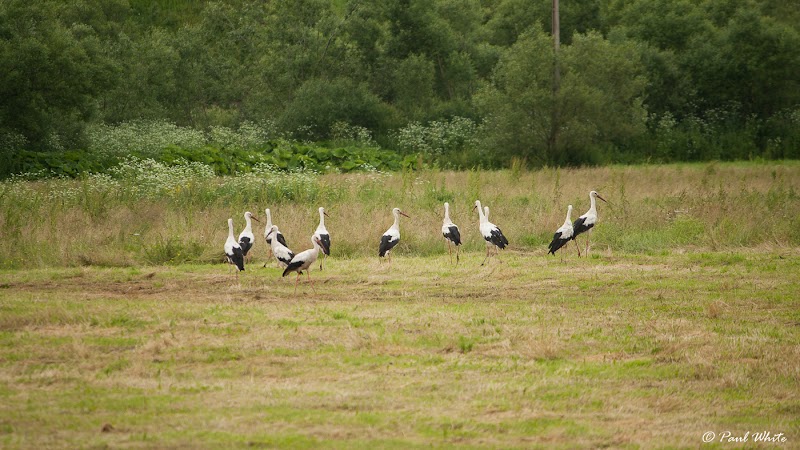 And it’s not just sheep, goats and cows that graze on meadows here, bears can be found too. 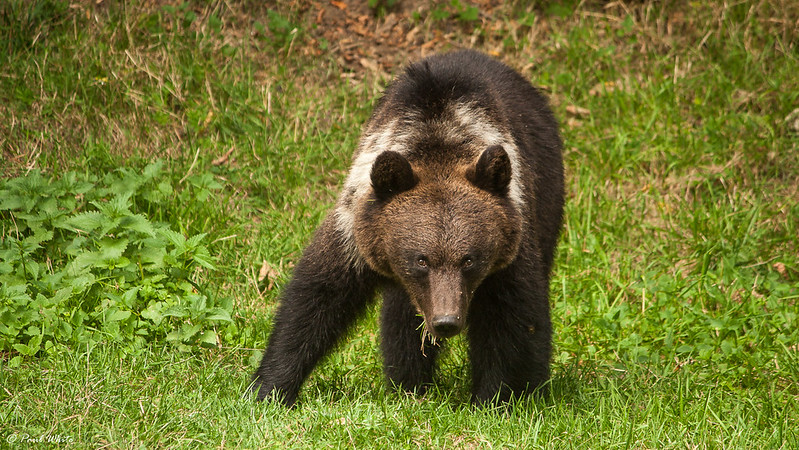 If you look at any single aspect of this cycle of hay making, it’s hard to make sense of all the benefits to people, flora, fauna and the wider environment. It’s only when you observe each component carefully, preferably through all four seasons, that these interconnections become apparent and it all comes together. This is how it worked for me anyway.

So where are the scything gangs in the meadows that Transylvania is famous for?

OK, so I’m not in Ghimeș where most people go to see traditional hay making, but nearly everyone I know owns a scythe, so where are they? I literally searched for weeks and then my neighbour gave me a clue as to where I was most probably going wrong. Imre said the grass is best cut when it is moist, morning dew or after a night of rain. This has been one of the hottest summers in Europe and we have had no meaningful amounts of rain for weeks. I would see oceans of grass on my travels, but I was missing the cut. If I didn’t miss it, I would only see tractors pulling rotary cutters. 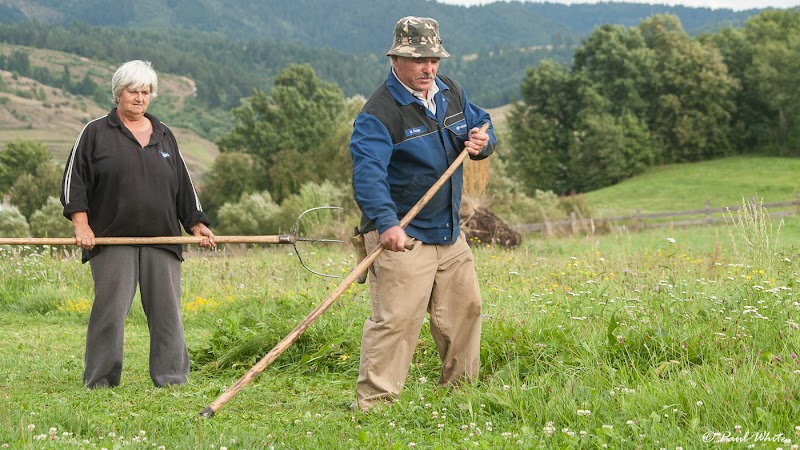 Scything grass by hand is an art which has been practised in Transylvania for many generations. Most farmers started scything as children and using the scythe becomes second nature to them as adults. In recent years however, especially since Romania joined the European Union, methods of making hay are changing fast with mechanisation. Rotary cutters are replacing the scythe, balers are replacing the tradition of stacking loose hay and the tractor and trailer are replacing horse and cart. Of course these new methods are easier, faster and more efficient but are they as sustainable and clean? 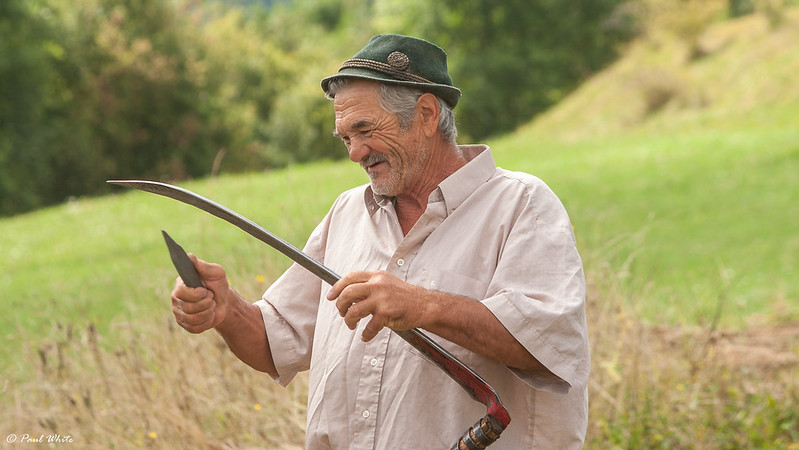 Sharpening the scythe blade is regularly performed during the process of cutting grass and the stone is kept in a holster on the farmer’s belt for easy access.

The first cut of grass takes place from July 1st onward. This gives time for meadow flowers to seed and young ground nesting birds to fledge. Grass is cut either by hand using a large scythe, by a mechanised walk behind sickle bar mower, or by a tractor-drawn rotary disc mower.

The grass needs to be spread by rake on the meadow to dry, and then turned for the underlayer to dry too. Traditionally this was done by hand, but to speed up the process this is now often performed using an acrobat hay turner. If the hay is going to be baled, then the hay is gathered into windrows.

Hay that has some moisture in it and needs more drying will be gathered into mini haystacks. This reduces penetration of extra moisture caused by morning dew and potential rain. It may need spreading again in warm sunshine to dry the underlayers before moving them onto a cart. This whole process from cutting grass to storing hay in the barn involves a lot of hard work. 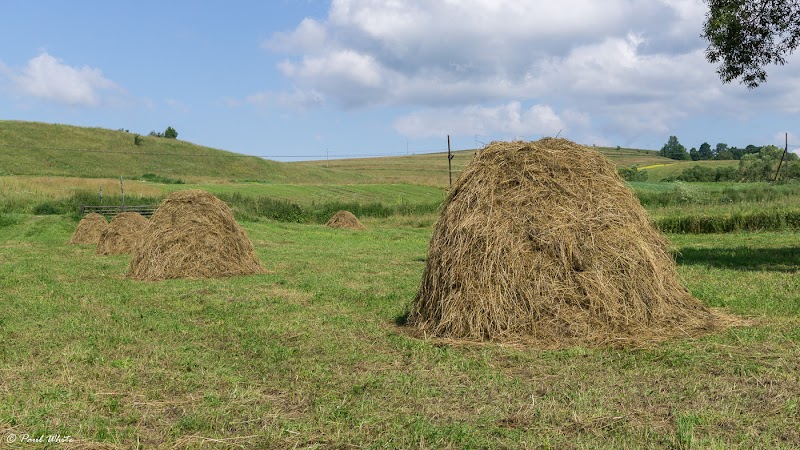 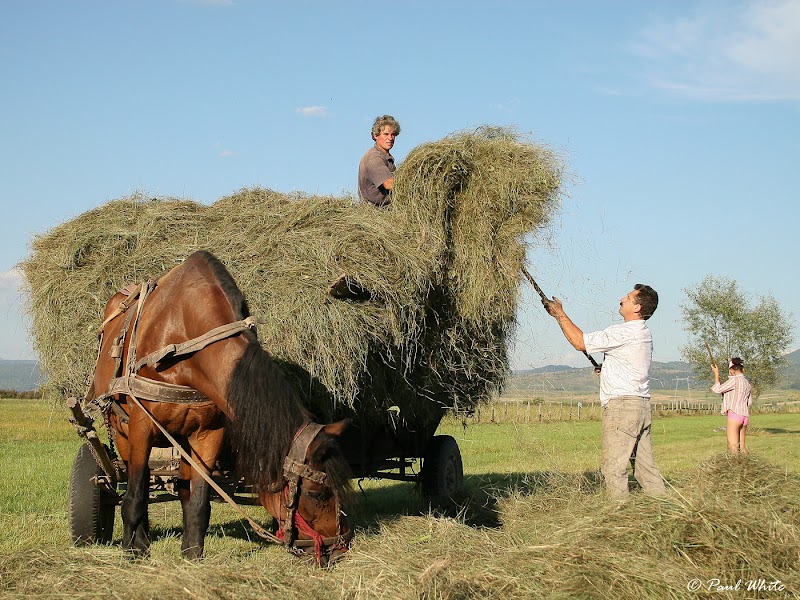 So how much hay is required to feed a single cow in a barn over winter? Locals will tell you that as a rule of thumb you need a cart load of hay for each leg of the cow. One cart load of hay weighs around 800kg, so four cartloads equal 3.2 tons per cow. This is an average and obviously varies depending on the quality of hay and the length of winter.

We came across this villager below fertilising his hay meadow close to the village. He had laid manure by pitchfork from a slow moving horse drawn cart and was then spreading it using this home made contraption. It consisted of a harrow holding down branches with a wood stump on top to sit on, then dragged along by two horses. The harrow smoothed the molehills on the surface of the meadow, which is important when it comes to cutting the grass. The branches broke down and spread the manure. 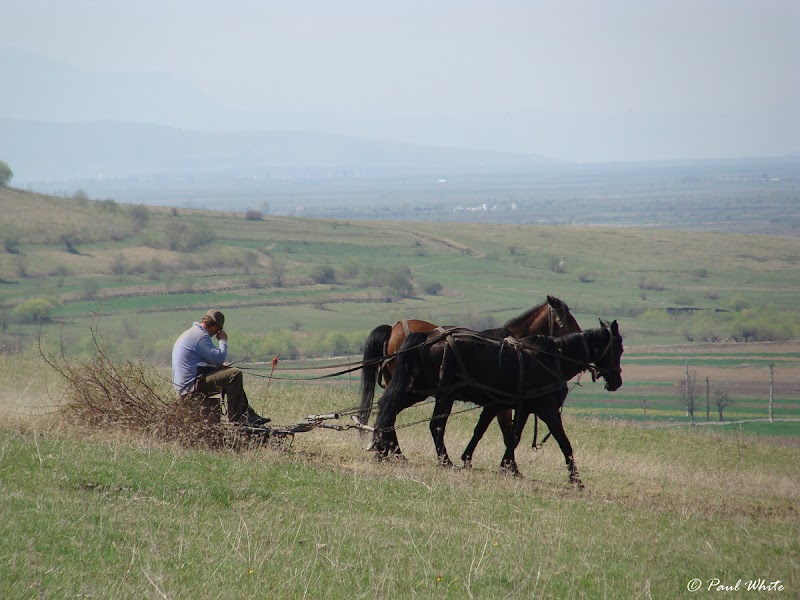 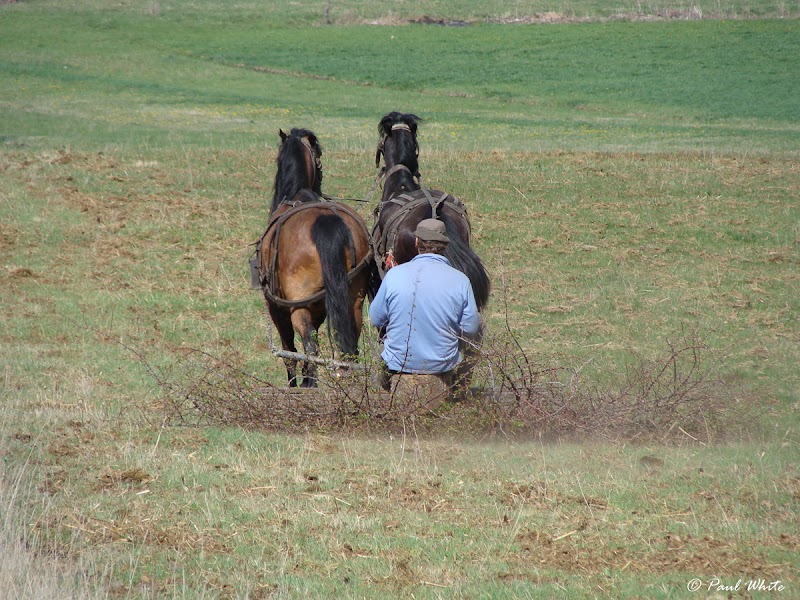 How many villagers own a meadow?

I am asked this question a lot. Where does one plot start and finish? Land tends to be handed down from one generation to another. Plots are traditionally divided into strips that can be several hundred metres long. So when you look at an ocean of grass, it appears difficult to separate one plot from another. Once cut, it is much easier to see order. 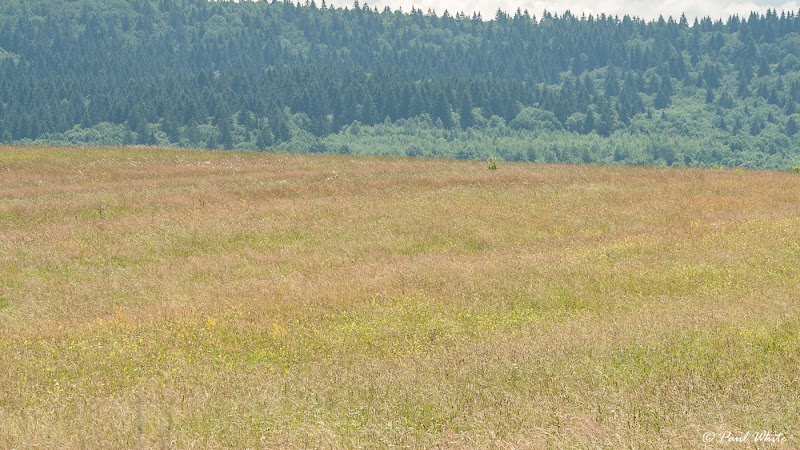 If the meadow is on the side of a hill, it is often terraced, which may have originally been structured for growing vegetables, but makes harvesting grass for hay much easier. It also offers a division between plots. 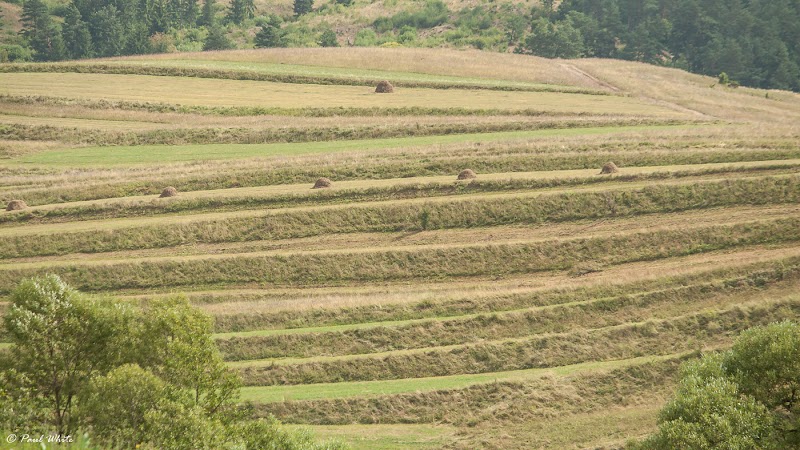 On flat land, trees, tree stumps, rocks, bushes, ditches, trenches, rivers and streams are all landmarks that are used to divide meadows. 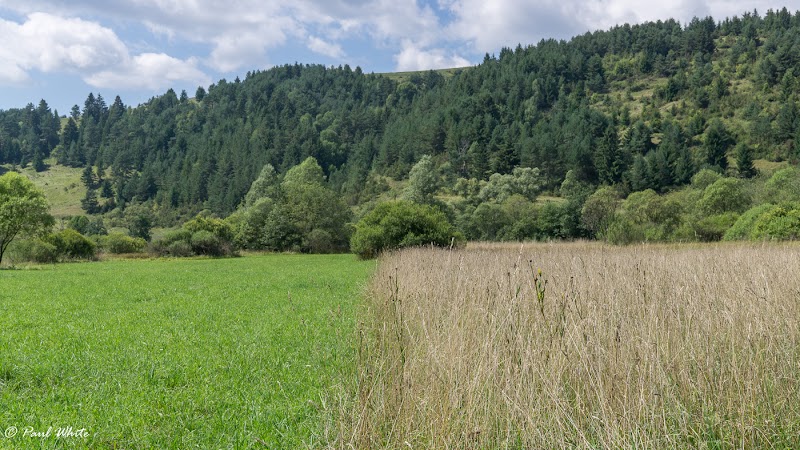 I am constantly learning new facts about hay production, so I will update this article on occasion.

Republished with permission from Paul White’s blog Wild Transylvania, where you can check for updates to this article.

In Eastern Europe, the creation of international documents protecting land rights is more than welcomed. […]

How can biodiversity loss and ecosystem services be valued? What are the implications of putting a monetary value on nature? Ian Fitzpatrick investigates current research on ecosystem service valuation. […]