After a period of trade war and tariff talk, the EU has reignited trade negotiations with the US. Following a meeting between US President Donald Trump and EU Commission President Jean Claude Junker, a far reaching statement has been made – one that goes further to open up markets in many ways than its failed predecessor TTIP (the Transatlantic Trade and Investment Partnership) tried to.

Following the Junker-Trump meeting, the statement released  said “we agreed today…to work together toward zero tariffs, zero non-tariff barriers, and zero subsidies on non-auto industrial goods. We will also work to reduce barriers and increase trade in services, chemicals, pharmaceuticals, medical products, as well as soybeans…we agreed today to launch a close dialogue on standards in order to ease trade, reduce bureaucratic obstacles, and slash costs.”

Friends of the Earth Europe released this handy diagram –  which is the statement with comments. 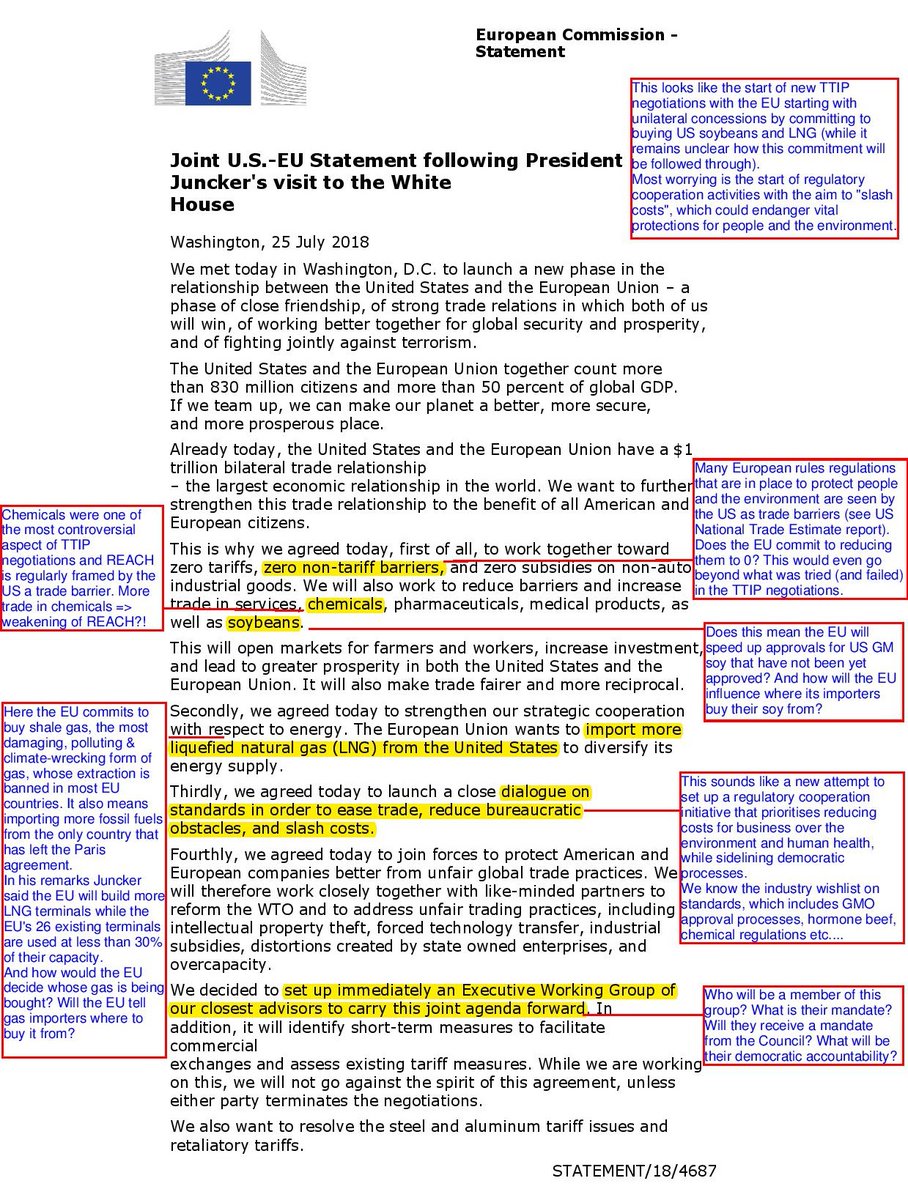 Much of what is in this statement will set off alarm bells in civil society organisations. While already being important in large quantities, most soy in the US is Genetically Modified (GM), which concerns EU citizens. Reducing “bureaucratic obstacles” is seen as code for destroying higher health, environmental, labour our other similar standards in one or other jurisdiction by many.

Donald Trump campaigned on a protectionist economic nationalism policy platform, and has implemented policy in line with this approach, since his presidency began. This includes immediately axing TPP – the Trans Pacific Partnership, when elected (he publicly flirted with rejoining, and then again staying out of TPP last April).

A noted flip-flopper, he has nonetheless maintained his protectionist position up until very recently, pledging 12 billion US dollars to compensate soy bean growers in the US reeling from the impact of his trade wars with the EU and China.

The EU too has commitments which it now appears to be willing to drop or ignore to strike a deal with the US. These include a much vaunted protein strategy (which has also been criticised in some quarters) to increase the EU’s protein self-sufficiency and to diversify imports.

Much was made of the Paris Agreement and its central role in trade agreements in recent times by French President Emmanuel Macron and others: it has been explicitly included in the Japan EU trade agreement for example.  Indeed EU Trade Commissioner Cecilia Malmstrom tweeted about the fact that it is “needed” in “all EU Trade agreement(s)”:

Yes Paris deal reference needed in all EU trade agreement today. In Japan agreement and will be in with Mexico and Mercosur..

Despite strong words from many political quarters in the EU, nothing appears to matter  – no standard, runaway climate change, or actual EU strategy or policy – when it comes to fast tracking what may be an even more brutal trade agreement than the TTIP. This has all the hallmarks of  TTIP on steroids.

Unless of course, its just more bluster from the most erratic of US presidents in living memory. Because geopolitics, actual trade and the real tariff rate on soy may be impacting more than grandstanding statements – whatever about the intent to run down high standards to help big business.

Bloomberg reports that “the European Union will import more U.S. soybeans as part of a new accord to avoid an all-out trade war. Yet the bloc was already likely to take more American shipments. That’s because the 25 percent tariff China slapped on U.S. soy imports earlier this month promises to reshape the global market for the commodity.”

This, Bloomberg states, made the EU a likely target for the increased sales by the US soy industry, and for the US to remain at trade war with China.

Sources point out that US soy sales to the EU, though significant, were impacted by the introduction of GM in the 1990s. An issue for the EU is the pressure it will come under if the US has to start segregating more of its soy to comply with EU standards.

However, others have been critical and skeptical of what is in this Junker-Trump statement. As Think Progress reported:

“According to the Wall Street Journal, Juncker, as the head of the European Commission, has little power to promise increased soybean or energy purchases, as they rely on private companies business decisions and “market conditions.”

“[The LNG and soybean pledge is] a bit of a stunt,” an EU official told the Journal. “You give something without giving anything.””

Think progress also quotes Economist Paul Donovan, who told CNBC “the U.S. is already the largest exporter of soybeans to the EU. There are no subsidies, trade taxes or quotas on soybeans in the EU. Private farmers decide whether to buy more soybeans or not.”

Reuters also pointed to the recent increase in EU imports of Soy. Quoting Stefan Vogel, head of agricultural commodity markets research at Rabobank, a Dutch bank that specializes in lending to the agriculture sector, it reported:

While there are no EU tariffs on soy, there are tariffs on processed soy of up to 6.4%. It is also the case that the controversial Polish government is in the process of passing legislation not to ban genetically modified engineered feed ingredients as planned but to postpone such a ban until 2024. However this legislation also includes provisions to reduce and eventually eliminate imported soybean meal in favor of domestic alternative protein sources.

Whatever else can be said about the Polish government and its plans, at least its doing something in the EU about protein.

May 16, 2012 Peter Crosskey Latest from the ARC network, Recent updates

What do we count, when we count greenhouse gas emissions? What’s anthropogenic and what’s not? And how does this all relate to the food system? Gunnar Rundgren explores. […]