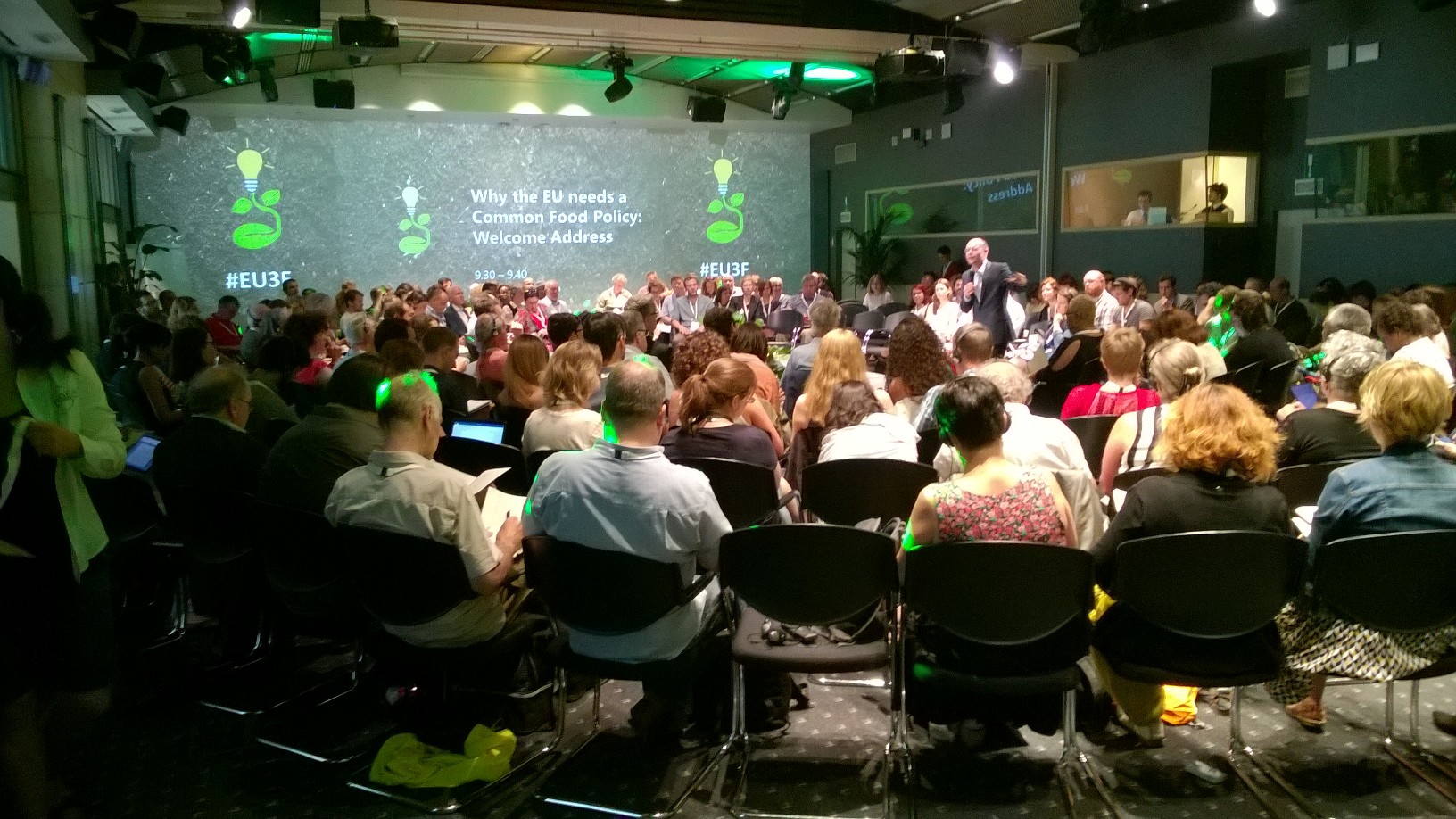 ‘The secret to change is to focus all of your energy not on fighting the old but on building the new,’  author Dan Millman.

This too is how Olivier de Schutter kicked off the EU Food and Farming Forum in Brussels on May 29th 2018. The two-day forum marks the next step in a length process the International Panel of Experts on Sustainable Food Systems (IPES-Food) has coordinated in order to create a Common Food Policy (CFP).

3 years of multi-stakeholder, Brussels-based Policy Labs, a range of Local Labs in cities across Europe and work with 30 partner organisations to construct a Sustainable Food Scoreboard has laid the foundation for the Forum.

The intention was clear: gather 200 cross-sectoral experts in one room, serve them a provisional set of worked-through food policies and ask them to not leave until they have put their heads together to liberally interrogate, untangle, adjust, nuance and re-imagine them all.

It was stressed from the onset: criticism is not enough! It is a first step, certainly, but it must be followed with something else: the building of alternatives. This was about process, the necessarily experimental, messy and imperfect process of challenging the traditional and dominant modus operandi of policy making and trying to think up a different way of doing things.

In the opening address, de Schutter confronted the deeply problematic power relations embedded in the CAP. Who makes the decisions? Under what mandate? These are fundamental questions of governance and democracy, he said, and we were to partake in an experiment of alternatives.

All this was to occur under the principles of transdisciplinarity and co-creation and within the framework of collective intelligence, a standard practice in grassroots organising, less so in the conference halls of Brussels.

With ukulele interludes and collective stretching interspersing more traditional talks and varied working group sessions, the two days resonate on, with much to ponder, much to feel hopeful about and much still to do.

How can you make sure a Common Food Policy is really common?

In the run-up to the Forum, each participant was equipped with a framing paper intended as an introduction to the CFP process and the provisional policies as they emerged from the working groups. Each participant selected one of the 11 draft objectives to focus on for the first day.

These ranged from redesigning social policies to address the root causes of food insecurity to building new education, knowledge & extension paradigms for sustainable food systems, to working towards a sustainable meat-fish-feed-protein nexus and supporting developing countries. Here we see evidence for the case that a common agricultural policy simply does not go far enough. When we change the focus to ‘food,’ it is easier to see why this is a question also of public health, international trade, social justice and environmental impact. It includes a wider range of factors which influence how we produce and consume food.

Each objective contained a range of concrete policy proposals. Our task, as participants and experts, was to interrogate these proposals, specifically how they related to the four guiding criteria: priorities, feasibility, coherence and EU relevance. These were to determine whether a particular proposal was worth pursuing in an EU CFP.

Who takes part? Whose voice counts?

With power dynamics mentioned at the get-go, an emphasis of the Forum was on accessibility. This was to be a space where the conception of ‘expertise’ moved beyond scientists and policymakers. The Forum was free to attend and particular efforts were made to reach out to people frequently absent from such conferences.

There were certainly moves in the right direction. Between the scientists and long-experienced NGO workers, there were some young people and farmers. As one participant pointed out in the closing circle, we should be very careful to congratulate ourselves on diversity in a space which was still not particularly diverse.

The struggle of inclusion was articulated in Dee Wilson’s brief talk on the formulation behind the UK People’s Food Policy. How do you reach people not usually involved in the policymaking process? You go to them because they likely will not come to you. You need to learn to communicate these ideas and questions in different languages, not just the languages of science and policy. This requires an appreciation of other ways of knowing, where the farmer holds a specific expertise, as does the community chef and the biodiversity conservation specialist.

And you need to go them at the start because ‘token participation,’ asking ‘the people’ to sign-off on pre-established set of policies is not good enough. This crowdsourcing effort took 18 months in the UK, and 10 years of research in Canada, Diana Bronson from Food Secure Canada told us.

The Forum seemed to embrace this. A focus was placed on learning from past experience: we heard from city and national level People’s Food Policies across Europe and Canada. The intention was to find out what went well but also what they could recommend and advise. These experts included Joost De Jong, member of the Dutch Transition Coalition; Céline Fremault, Brussels Minister for the Environment, Energy and Housing and Luc Lignon, Director of Food Policy of the City of Montpellier, to name a few. (A full programme of speakers can be found here.)

The Forum closed on a high with a commitment by Peter Schmidt from the European Economic and Social Committee (EESC) to support a Common Food Council and with messages of support from MEP Bart Staes, French ex-Minister of Agriculture, Food and Forests Stephane Le Foll and Annika Lillemets, member of the Swedish Parliament. It was stressed to all participants, however, that after participating the CFP was ours. Part of that was a responsibility to take it and disseminate it through our own networks and connections as far as we could. This was to be an end only to the Forum and not with our engagement, responsibility and commitment to the creation of a Common Food Policy.

That is perhaps a personal key takeaway: participating in the creation of a truly people’s policy cannot simply be an occasional, opt-in scenario. It comes with responsibility. That responsibility is a commitment to the continued process of accessibility, participation and improvement. There are innovative examples across the world of where people’s food policies have been put in place and I am excited and hopeful as to how a Europe-wide policy may follow suit.

Exclusive: Olivier De Schutter on why “a Common Food Policy is urgently needed”

Do we Have the Tools to Choose Sustainable Meat? #LivestockDebate

The battle for the future of food: a new report by IPES-Food and the ETC Group sets corporate power against the irresistible force of social energy. Laying out a vision of civil society-centred food systems founded on agroecology, diversity and human rights, this is a call to rapid action, reports Ursula Billington. […]