On Wednesday the 10th of July an estimated 2,500 farmers took to the streets of Dublin to protest against the proposed Mercosur deal. The protest was organised by Beef Plan, a voluntary not for profit organisation set up in October 2018 by a small group of farmers from Meath (in Ireland’s centre-east). Since then, its membership has grown to over 20,000. So who are they and what do they want?

On Wednesday the 10th of July an estimated 2,500 farmers took to the streets of Dublin to protest against the proposed EU-Mercosur deal. The protest was organised by Beef Plan, a voluntary not for profit organisation who was set up in October 2018 by a small group of farmers from Meath (in Ireland’s centre-east) and who has since grown its membership to over 20,000.

Buses were put on for farmers from all Irish counties, sponsored by their local businesses and farming co-ops, to bring farmers up to the Dail. Some left as early as 5am picking up people en route.

A major concern expressed as of low incomes and an uncertain future for farmers: Irish livestock (sheep and beef) farmers are producing at a loss, with low incomes and heavy CAP reliance: 2018 figures suggest “Profit margins in cattle farming fell 10% from their already low level. Costs increased by 8% (including feed costs rising 31%) on cattle rearing farms, and by 12% on cattle finishing farms. Steer prices rose 1%…The average income on cattle rearing farms is estimated at €10,200 for 2018, down 19% from 2017. ”

Reliance on CAP subsidies for beef and sheep is running at or above 100%. The sheep and beef sectors have been impacted heavily by recent crises, including the fodder crisis, when last summer’s drought led to a shortage of silage and hay, which had to be imported from elsewhere in Europe.

The potential impact of Brexit and of Mercosur where both emphasised at the protest rally: Ireland has historically been heavily reliant on exports of beef to the UK, and, despite some changes in recent years, this is still the case.

Edmond Phelan of the ICSA (Irish Cattle and Sheep Association), drew attention to Mercosur: “Three years ago our organisation stood here protesting against Mercosur; it was a bad deal that day and it is a bad deal today” he said.

“The Taoiseach, Leo Varadkar, would want to stand up for us or else stand down and if any supermarket thinks they’re going to sell Brazilian beef, we’ll close them down. Mercosur has nothing to do with beef, it’s all about selling German cars. We’re not going to lie down and let it happen,” concluded.

Hugh Doyle of Beef Plan pointed to the sheer scale of Amazon rainforest clearance, emphasising that we have only one climate – “if we destroy that climate, we will have to look our children in the eyes and say ‘ I’m sorry’ and that is just not good enough.”

While beef farmer viability was the core message, it was also highlighted by the speakers that this protest was not only a farmers protest but also a rural Ireland and climate protest. As Sinn Fein leader Mary Lou Mc Donald put it ” the amazon are the lungs of the world” and Mercosur represents a ”sell-out” of Irish farmers and called on Taoiseach Leo Varadkar to support her party’s motion to reject the deal.

Mercosur concerns are not only to be found in beef producing countries in Europe. Argentina’s National Association of Entrepreneurs fears “Small and medium sized enterprises are going to be the most affected by these policies,” the organization said, adding that the only beneficiaries from the free trade pact would be “large multinational firms and exporters in the agribusiness, to the detriment of local industries”.

Ireland is in a similar situation, where main beef processor ABP, run by Larry Goodman has nearly full control over beef supply, and in turn also controls the prices and factories. Goodman ‘s net worth is about E3.5 Billion, while his company contributed little in tax returns from its E170 million profits, the Irish Times reported last month. On top of this his family receives hundreds of thousands of euros in CAP subsidies each year, making him one of Ireland’s leading beneficiaries.

If this deal gets the go ahead rain forest clearance will increase, while the extra importing of 99000t of beef from South America to the EU will in itself have an environmental impact. Ireland in turn will end up with even more mostly monoculture plantations of Sitka spruce, which is being pushed hard by the Irish government as an alternative to struggling beef and sheep farming, despite the negative consequences environmentally of this.

Marchers were also concerned about the social and economic impact on rural Ireland of the end of beef farming: For every euro in an average suckler farmers pocket, more than 4 euro of economic activity is generated in local economies. Mental health in rural farming communities is declining due to economic pressure and rural isolation.

Huge Doyle pointed out that nearly 53 years ago sixteen farmers of the National Farmers Association started a 217 mile walk from Bantry in Co.Cork to Dublin to demand better rights, working conditions and incomes for farmers. By the time they marched through Merrion street their number had grown to 30,000. “We see ourselves back here today fighting for the same rights” he added.

These where remembered by the protesters in Dublin and there was an air of hope for the future. As Hugh Doyle put it in an interview ”this will not be the last you hear from us, and if the government of Ireland fails us we will take further action to ensure the survival of rural Ireland and its small suckler farmers.”

It may be the case that Mercosur will be a catalyst to make a real change, as the protest last Wednesday has shown. When it really comes to it the rural population will stand up and not only shout but also work together and make those changes happen. 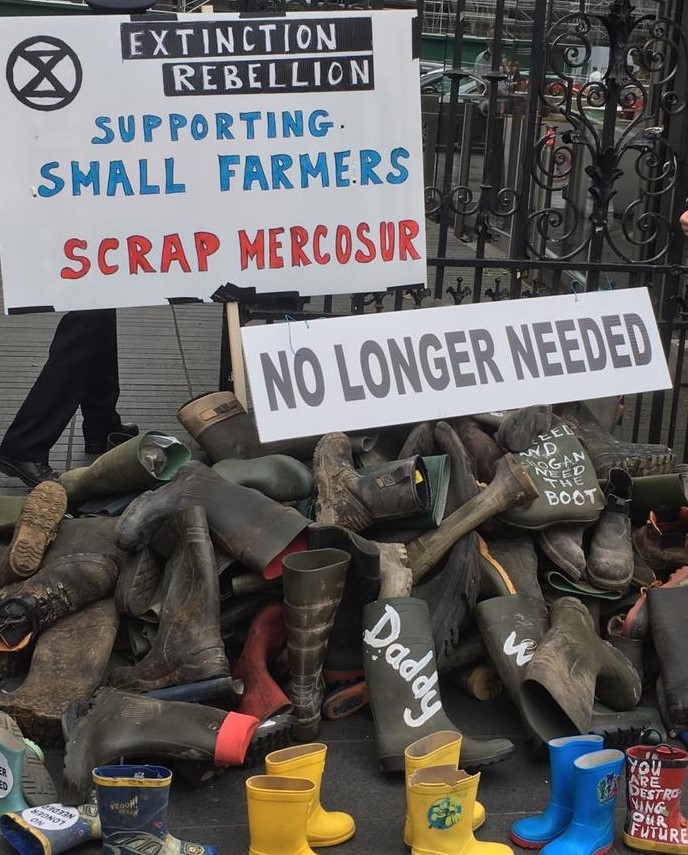 The environmental case for CAP reform in Ireland

#SoilMatters – So How Did Our Authors Treat It?

Here we summarise and provide links to all eight contributions to the soil matters article series. From soil and the city to no till, humus and technical articles from soil scientists, there is much in here to cause wonder, controversy and, it is hoped, greater understanding. […]

It is difficult to grasp the scale of the situation we face with covid-19. People’s lives change fundamentally. So do our societies and economies. We face massive reductions: less mobility, no physical meetings, no open markets, no cultural events. We are living in isolation. How can we, how can our societies adjust to this new reality? How can we as ARC2020, as European network, research community, news provider and advocacy platform contribute to keeping civic movements alive and active around sustainable farming, food supply and transition towards better farming, food supply and ago-environmental practices? […]