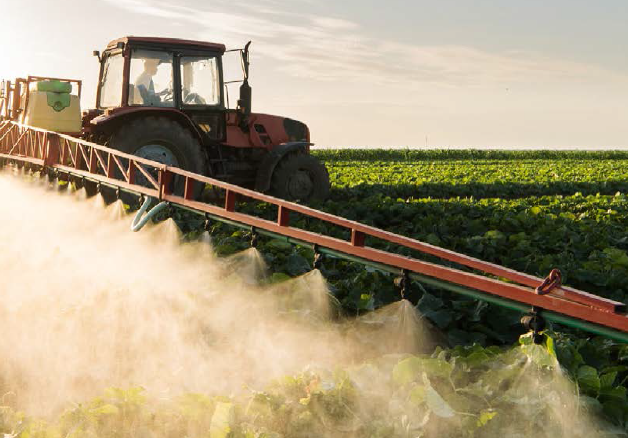 In this op-ed, Matthias Wolfschmidt of Foodwatch International unpacks the EU’s food system, its reliance on cheap imports, its generation of food waste, the power of lobby groups and Europe’s subsequent reliance on damaging pesticides and fertilizers. In this context, Wolfschmidt considers how the weaponisation of hunger embeds a lock in of problematic agri-industrial inputs, while also pointing to a way out of this bind within 15 years.

When was the last time you were afraid of starvation? Not just eating a bit less to lose a few kilograms, nor noticing that the fridge is empty. Real starvation.  Experiencing real hunger was a daily reality for 828 million people in 2021 In 2020, 3.1 billion people could not afford a healthy diet.

Those of us lucky enough to live in the EU have not had to experience this level of hunger. However, whenever regulations threaten the current EU agri-business model, the agricultural industry play the “hunger card”. It triggers our primary fears of not having enough and plants the seed of fear that, without their intervention, our future is a food crisis.

The EU’s highly subsidised agriculture system is heralded as one of the most efficient on the planet, well-positioned in the global market. It is the promised land where so much milk (and meat and alcohol) flows that we can export more than any other region in the world.

We are told that we all owe this abundance to a flourishing agro-chemical industry. That they are constantly striving to enable ever higher yields and reduce toxicity. We should be grateful to them for feeding us and the rest of the world.

This is the fairy tale told by the pesticide industry over decades. It is echoed by the feed industry, the meat and dairy industry, the retailers and the food processors who all benefit from the constant supply of cheap commodities ensured by overproduction. Even the remaining farmers herald the success of “modern agriculture” – afraid of losing the race if they reduce the intensity of their farming methods.

Where the decisions on agricultural policy are being made, there is an army of paid lobbyists, orthodox politicians, members of various ministerial bureaucracies, sponsored scientists, agricultural magazines willing to repeat the same messages again and again: Europe is feeding the world and without our pesticides and fertilisers there will be a food crisis.

The EU food production system is characterised by a steady flood of cheap supplies from third countries: fossil fuels, non-renewable fertilisers, raw commodities and even farm labour (pickers for fruit and vegetables).

The now almost omnipotent supermarket chains benefit enormously. Thanks to their immense buying power, they decide what is produced, the price, the quality and with what methods.

There is more than enough food produced in the world to feed everyone on the planet. Only 23 % of globally available agricultural land is used for direct human consumption, contributing to 82% of calories needed. The remaining 77% of agricultural land (arable and pastures) is used for the production of animal feed (and agri-fuel) and ultimately provides only 18% of humanity’s calorie supply.

The EU feeds approximately 7 billion farm animals per year. Almost 80% of all agricultural production resources in the EU are used to feed farm animals. The resources (feed, water, medicines) to maintain this large amount of animal biomass are immense.

In the EU, 80 million tonnes of food waste are produced every year, with an estimated value of 143 billion euros. This does not include the quantities that remain in the field due to cosmetic defects, lack of labour to harvest or too low producer prices. Nor does it include the millions and millions of sick farm animals that die on farms and do not even reach the slaughterhouses and the supermarket shelves.

Despite food abundance, and even wasteful overproduction, there is an obsession with maximising yields. Pesticide reduction is currently hotly debated, and decade old pseudo arguments are brought up and never seem to disappear. However this message needs to be dismissed for what it is: a myth fed by an industry to increase profits. It has nothing to do with feeding people.

For decades, the discourse on crop protection has almost exclusively focused on chemical pest control. Most conventional farmers have been systematically indoctrinated that this is the only way to produce what is needed. Pesticides reduction or regulation, it is claimed, would cause yield shocks. High crop yields at any cost are still the main goal of many farmers.

The current EU agricultural system is in a “pesticide lock-in”. Up to now, most farmers are forced to use pesticides. Current policies do not address the economic drivers of pesticide use or promote much needed changes in international trade, climate policy, rural development and food policy. The political influence of powerful corporations and interest groups prevents any progress. In a recent study on pesticide pollution in water, the term “institutional lock-in” is used for the cementing power of certain lobby groups in combination with regulatory ignorance, apathetic behaviour and the lack of political will on the part of state actors. 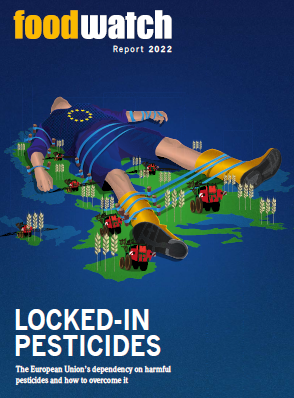 The complete phasing out of pesticide-controlled agriculture is possible and feasible within 15 years in a crop-by-crop approach, as foodwatch has shown in the recent published report “Locked in Pesticides”.

The prerequisite for successfully ending the era of synthetic-chemical agriculture, however, is to recognise and stop the hunger-fear game that the pesticide industry, and their teammate co-profiteers from the agricultural and food industries, have played for more than 70 years. Synthetic chemical pesticides are clearly not the solution. They are the core of the problems of today’s agricultural system, which is completely dependent on fossil energy.

The hunger card game is a vicious bluff. New rules are overdue. It’s time to tell the pesticide industry: “Game Over”.

Undeniable Success of the ECI “Save bees and farmers”

Watch out for business-as-usual agri-buiness solutions, even very well meaning ones…. […]