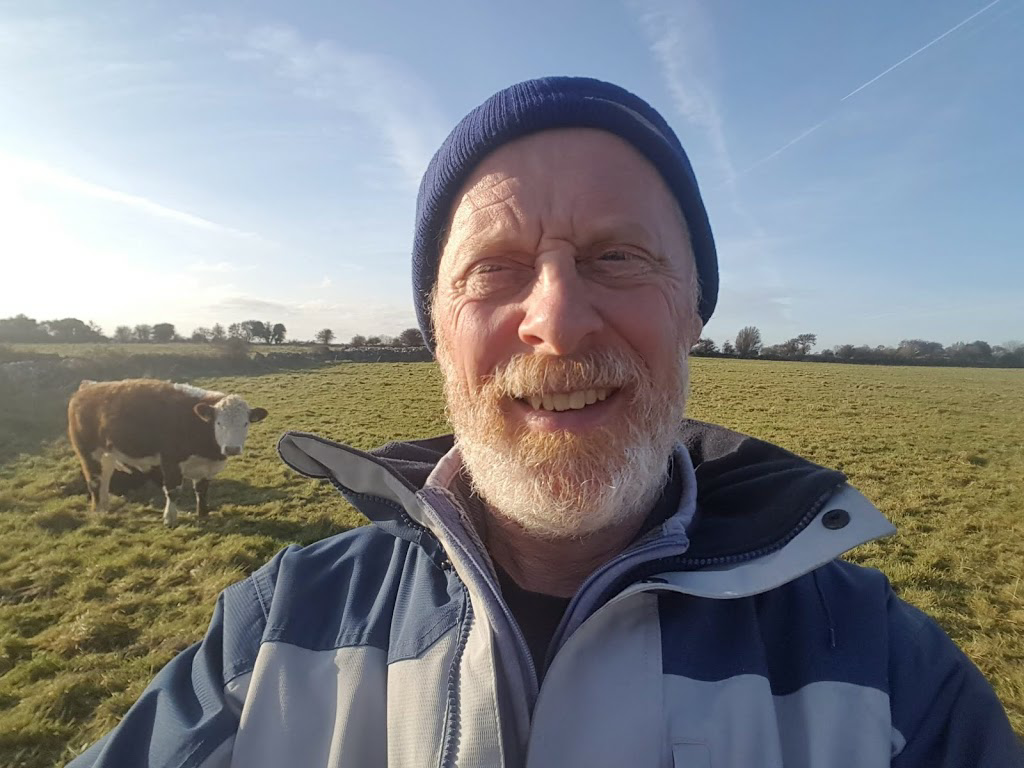 Oliver Moore spoke with Irish organic cattle farmer Sean Butler about rewilding and organic farming. The Roscommon man is already starting to encourage nature to come back – but could CAP help?

Sean Butler is the 5th generation farming his land in south Roscommon, west of Athlone in the Irish mid-west. He’s been farming Hill Side Farm since 1976, after a stint in Mountbellew Agriculture College, which he attended just after school.

Oliver Moore : When did you start farming organically Sean?

Sean Butler: When I started to listen to myself a bit more. I felt I was destroying things not building things up. So I started to look at organic, but had to test it out first. So I gradually reduced fertilizer use, then in 2002 went into conversion. I’ve been organic since then.

SB: Since going organic, I’ve noticed that working with the land makes more sense than working against it. If you look at you land, and leave it alone, you can see it wants to turn into woodland. I’ve an application to put 1.3 ha of the land into native woodland. I let some of the boundaries grow up a little bit. And I’m in danger of losing some payments by doing that, as this land is not as productive officially now.

I’d like to see something come into place that would allow rewilding. To allow native woodland, with some animals involved, is the idea. Not straight lines forestry – if it could grow itself, and had animals in there, there would also be some open spaces in amongst the trees.

I’ve been looking for people interested in this rewilding. I would like this to be encouraged in the next CAP round. It would help to reduce stock numbers, increase oxygen production, biodiversity, soil conditions, water retention in the soil, the soil as a carbon sink – all things we need at the moment. There are a lot of health benefits to having these more natural places, to unwind, to allow nature to heal us a little.

OM: You’ve started to allow the odd bit to rewild. How is that?

SB: What’s growing in the ditches is what’s suited to the landscape and weather. So the blackthorn moves out from the edges and suppresses the grass. Once the grass is suppressed, there is shelter from the weather and from animals, then the other trees can grow.

I’m been scattering some hazelnuts and acorns into the briars and bushes. What’s there will spread over the land and will help the taller tees, birds will roost and their droppings will help too. The leaves that fall will provide a nice bed. Maybe oak and hazel should be mildly introduced, but the focus should be on small interventions, no heavy machinery. Then by reducing livestock, they wouldn’t be competing as much. But some browsing livestock can go there as well.

It’s amazing how quick it can happen, when you allow it to happen. If oak or hazel or whitethorn is there naturally, it’ll start to come back in. Rather than the current forestry model – with trees in straight lines – when it happens naturally you can see how it’s meant to be. Animals play their part in controlling the system as well.

I don’t see a huge uptake from farmers, but it’s an option some of us would take. We’re going to have to bite the bullet at some stage, and face up to the ecological crisis that’s coming. Now, we’re imposing our opinions and plans onto the landscape. There’s a better approach, working with the land more than if you just come in and say “ I’m going to do this here”. Then you’re not consulting the land, or asking what it wants.

Sean Butler’s farm.  A version of this article also appeared in the Irish Examiner farming.

More on organic farming on ARC2020

Organic Agriculture and the SDGs – Scientific Evidence from Comparative Research

“Batting Away the Baddies” – Organic Food, Cancer, Herbicides and History

We are back in northern Italy, with mushroom and agroforestry farmer Chiara Garini. Writing after two years on her own farm, she reflects on her experiences and takeaways and what plans lie ahead.  […]

20% the number of inspections and even more adjustment to the lighter shade of pale that is greening. Simplification Hogan style. […]