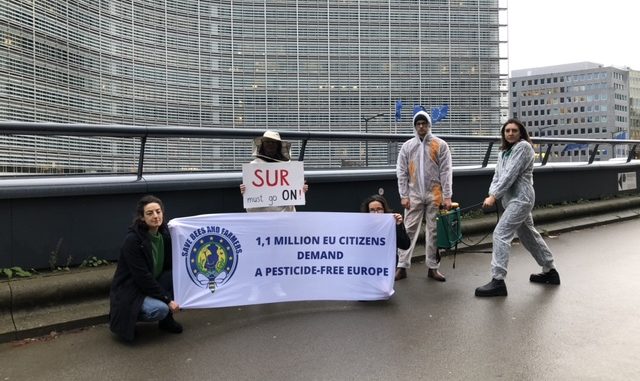 Pressure from the pesticide lobby and big-ag has successfully delayed the SUR, a regulation essential to reaching Farm to Fork pesticide reduction targets across the EU. On December 19th, at a meeting of the EU Energy Council, the formal request for an additional impact assessment was passed without any Member State blocking it. So what’s next? Ashley Parsons reports

Pressure from the pesticide lobby and big-ag has successfully delayed the SUR, a regulation essential to reaching Farm to Fork pesticide reduction targets across the EU. On December 19th, at a meeting of the EU Energy Council, the formal request for an additional impact assessment was passed without any Member State blocking it.

The European Commission must now prepare a new so-called impact assessment within 6 months, although it has already prepared a similar assessment once.

The press release announcing the adoption of the request for an additional impact assessment states:

“Commissions’ impact assessment does not provide adequate quantitative analyses regarding the potential impact of the proposal on the EU’s agricultural sector and potential increased food dependence, nor does it consider the impact of the proposed ban of plant protection products in sensitive areas, especially given the limited availability of low-risk alternatives to regular chemical pesticides, and without similar requirements for imported foods in the EU market. It further notes that reduction targets at national level should be decided in a flexible manner, taking into account the specific conditions of each member state.”

Ramona Duminicioiu of Eco Ruralis explains why Romania is asking for the additional IA, stating, “They [Romanian Agri-Council members] are completely sold on the idea that industrial farming feeds the world and is the future. Also they are using the argument that Romania has the lowest level of use of pesticides in the EU, which is true but this is only the merit of small farmers and peasants, not the industrial farmers and companies.”

A block on the submission of the formal request for the additional impact assessment would have been big: essentially it would have meant energy ministers scuppering something agri ministers were trying to do. Fear of reprisals  – tit-for tat retaliation for similar procedural A list legislation – could have been on the cards.

Despite the setback, NGOs and citizens are doubling down on efforts to get the legislation approved. After all, in a matter of a few short weeks, hundreds of scientists and hundreds of NGOs have come together in various ways to mobilise and message on this important topic.

GLOBAL 2000 is launching a mobilization campaign in January to save the EU pesticide reduction targets. “Together with the international partners of the successful European Citizens’ Initiative ‘Save Bees and Farmers’, we will inform the public EU-wide about the problematic attacks on central goals of the European Green Deal. At the same time, we want to convince decision-makers with arguments to pursue a constructive policy that makes Europe’s agriculture fit for the future.”

And maybe law makers are listening?

On January 24, 2023, from 2:30 to 6:30 p.m., the organizers of the European Citizens’ Initiative “Save Bees and Farmers” will to present their demands for pesticide reduction and restoration of biodiversity to MEPs and the European Commission in the European Parliament. The event will be broadcast live. Stay tuned to this space for more information leading up to the event.

Specific reductions in the use of mineral fertilizers and pesticides, as well as a target for the increase in the land under organic management, are among the 2030 Commitments of the EU Biodiversity Strategy. […]

Hidden away in a footnote, away from the fanfare of the launch of the EU Green Deal’s Farm to Fork and Biodiversity Strategies, was a nonetheless crucially important document. A document that links vision to the practical CAP work member states are currently conducting. So what’s in it, what’s missing, and what does it say about power relations between the Institutions and the Member States? […]