Oliver Moore attended the 2nd Agroecology Europe Forum in Crete recently. In the first of three reports from the island and event, he tells us here about the one of the field trips. This was a visit to the inspiring Apo Kinou social coop, where production, distribution and consumption are all under collective control.

There is much talk about farm to fork these days. Well, Apo Kinou on the Greek island of Crete really does this in a wide and inclusive way. This social coop employs 15, including five farmers. As many again are involved, without being coop members, as farmer-suppliers or in other aspects of the initiative. It does all of this with just 15 hectares of spread-out land and two buildings.

Greece’s economic crisis has been severe. A number of different approaches to viability emerged there over the last ten years. Social coops are one. These differ to the established coops which had a bad reputation as bloated and corrupt. So in 2012, social coops were established by law for the first time to integrate some public goods into the coop model.

“Any surplus must go to a specific cause” Sandra Kypriotaki says, “This could be employing people with specific needs, or, in our case, working with small organic farmers is one factor.” 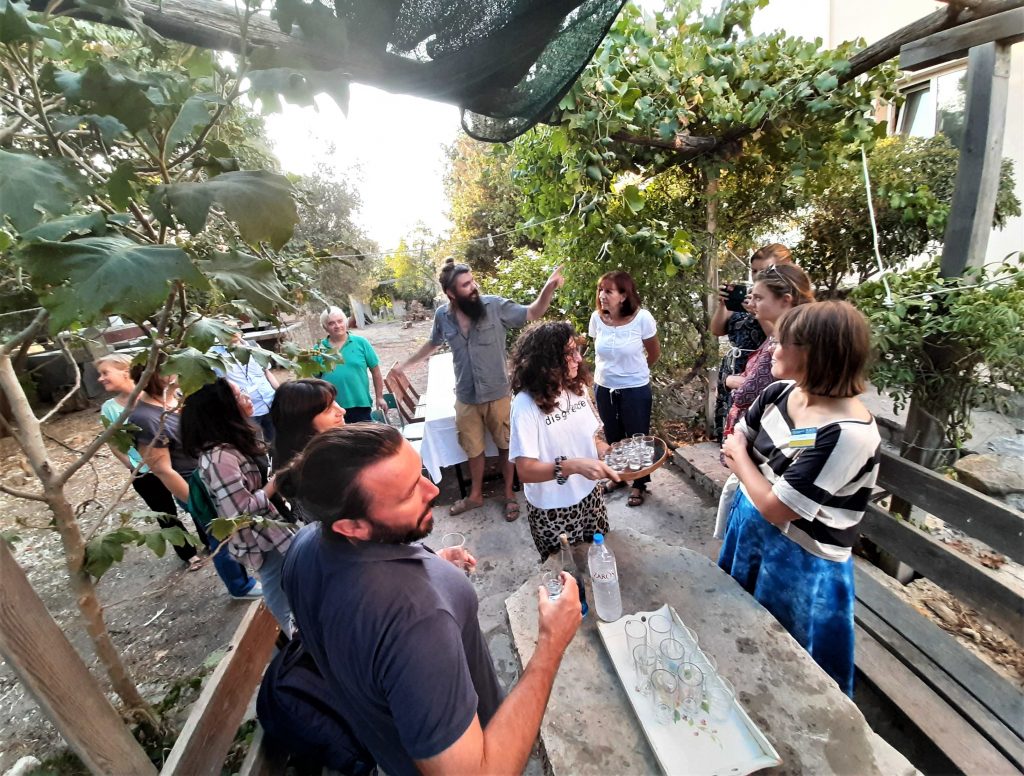 She continues: “We also support specific causes with our produce. For example, there is a self-run factory in Tessoloniki. When it collapsed along with the Greek economy some years ago, the workers took over and still run it. So we are supporting this factory by supplying produce to their festival. We also pay above average salaries and provide better supports”.

She gives an example “the state pays for two months maternity leave. We discussed with one of our members what she wanted, when she had a baby, and we’re supporting her for a year”.

This is how the coop approaches things: ongoing relations with members from farm to distribution to catering, while prioritising a steady economic performance over excessive profit.

Our visit started in the middle, at the distribution centre, which had a lovely homely feel as we entered. Out back, the packing house was full of amazing Cretan organic products from their own farms, and from other related farms. Sauces and oils, herbs and speciality long life double baked breads, and an amazing mustard, which is their best seller.

Among them all, a certified organic donkey milk soap, which is one of the more specialist organic products this column has encountered. 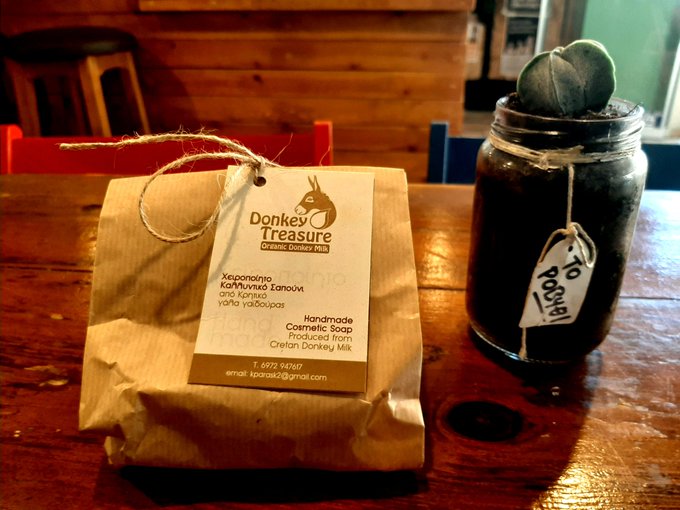 The work of consensus making in an organisation of this size is “like a long self-development course” Sarah laughs. “Our 30 members meet once a week. I’m definitely a better listener now. I have to learn how to understand where people are coming from. We talk a lot!”

Being a social co-op, with a strong ethos, Apo Kinou embraces seasonality and the ethics of other farms. So they only sell into small organic stores and other coops, while support is given to farms with good labour practices: if they find out about bad labour practices, they stop working with the farms. This is especially an issue in Greece with such a migrant population ripe for exploitation.

All of these aspects limit profitability, but mean the coop feels important for its members. Some exports develop, with visitors making solidarity arrangements to purchase a long term, fixed price specific product, like olive oil.

Farmers are paid a set price through open budgeting systems where the farmer explains what is needed financially for the year.

The coop has also introduced vegetable box schemes, quite unusual for Greece, which also can have their great range of extra products.

Stopping for a bite in Chickpea, their café and shop, showed another value add and labour creation location, using almost all the coop’s products for sale or as ingredients. Tasty, healthy, and very little of the plastic waste that seems to have infested Crete.

Up in the hills we visited one of the farms, where Myron Christoforakis – a gentle though imposing looking giant – walked us around his agroecological set up. This very mixed holding was something of a Garden of Eden, with dozens of plants and some animals. Many olive trees were accompanied by ground capers as a semi-spontaneous cover crop, which emerged from mud seed balls. “I try to let the system take care of itself” he tells us, as many from the forest gardening end of the agroecology spectrum often say. This means few if any biological controls, some carefully selected companion planting, and allowing a mixing of plants and animals.

Our evening meal outdoors, chorused by the background sound of crickets, with gently contented people, brought the fork to the farm. And it showed that another world is possible when people come together.

Letter From The Farm | Mimicking Natural Processes in Greece

The factory farm system used by global agribusiness firms is a major source of the greenhouse gas methane. Ben Lilliston and Shefali Sharma of the Institute for Agriculture and Trade Policy (IATP) highlight that the push for appropriate regulation of factory farms’ methane emissions in the U.S. should coincide with EU efforts to regulate these emissions. […]